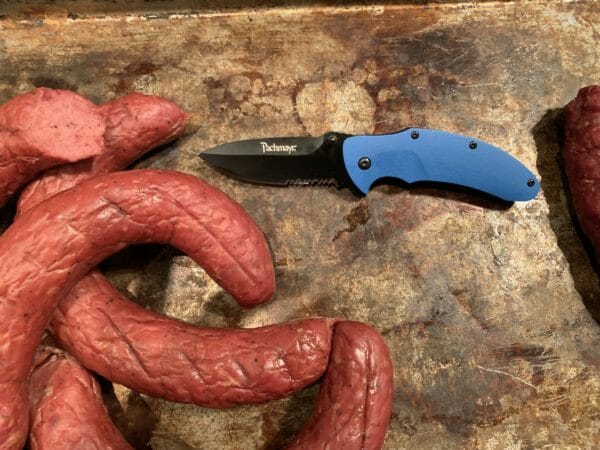 The Pachmayr G10 Tactical Folding Knife is an economical EDC folder.U.S.A. –-(Ammoland.com)- If you’re looking for an economical EDC check out the Pachmayr G10 Tactical Folding Knife. It is listed as a Tactical knife but at its price of $15.98 you can’t beat it for an EDC to perform all of your daily tasks. Such as opening boxes, cutting hay twine, slicing deer sausage and it has a 1 1/8” of serration to cut rope. Pachmayr G10 Tactical Folding Knife It would also make a good bang around camp and backpacking knife or for use for when on the water. The blade is advertised as being 3.625” but it only has 3 1/8” of a cutting edge. The Pachmayr G10 Tactical Folding Knife utilizes a flipper and a thumb stud to aid in opening. Mine is stiff and doesn’t flip open very easily but still, with a good flip of the wrist it does pop open. I applied a couple of drops of oil to the plastic bushings but that didn’t help any. I imagine over time and use it will loosen up more. It utilizes a liner lock system to keep it open while in use. I always check to see if the liner lock fully activates. This one does. On many cheap liner locked knives the liner lock only partially moves over to lock the blade in place. That’s a bad/big deal if it closes on your fingers. Always check this feature when buying a folder. But on many of them it is an easy fix. Just stick the tip of a small flat head screwdriver in and slightly bend the liner lockout to the proper position. On some knives, it will then stay in the proper position. The blade has a drop point. The end of the spine on the tip is ground down to almost give it a point but due to the curvature of the grind, it is not straight enough to really have a good point. With the finger groove and the rather small flipper, you have a good grip on the knife while in use. Along with the top features. The top of the handle drops down about 1/8” and there are thumb groves on the first ¾” of the spine of the blade which further aids in your grip. But the thumb grooves are slightly slick. The handle is made out of G10 material and while it does have a minute texture, it is pretty much smooth but I feel like I can maintain a good grip on the knife while in use due to the other features. The handle is a definite blue color so if lost it will be easy to find. It has a pocket clip which positions so the blade tip is pointing down, which is the position that I favor. That way when I pull it out of my pocket for action it twirls right around so the flipper lands right handy for my pointer finger to activate it. The Pachmayr G10 Tactical Folding Knife has an MSRP or $15.98 and as is usual we will close with the specs: About Tom Claycomb