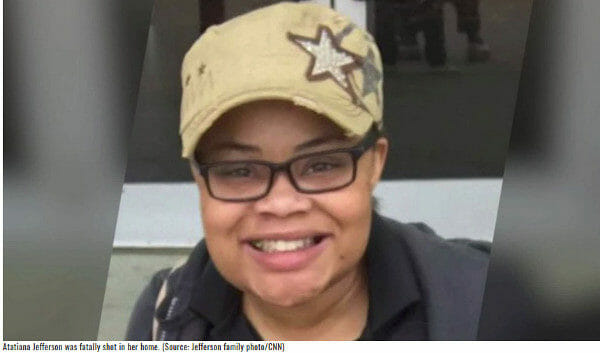 Atatiana Jefferson family photo/CNN, scaled by Dean WeingartenU.S.A. –-(Ammoland.com)- On 12 October 2019, Officer Aaron Dean shot and killed Atatiana Koquice Jefferson in her home, at about 2:33 a.m., by firing through a window, into a dark room at the back of the house. A neighbor had called the police because he noticed the doors of the house were open in the early morning hours. He believed he was calling for a welfare check. The police response was not what would commonly be reasonable for a welfare check. The call to the officers from dispatch was for an “open door” or “open structure”, which is more commonly considered a potential burglary call. The actions of the police indicate they treated the situation as if it were a potential burglary. There is body camera video of the event, from a body camera former Officer Aaron Dean was wearing.
https://www.youtube.com/embed/brexoEE-Ahw
Officer Aaron Dean did not announce he was a police officer. He would not announce if he were hoping to catch a burglar. He should have announced once he saw Atatiana. It is unknown if it would have made a difference at that point. Atatiana had been armed with her legally owned handgun. We do not know if she had the handgun in her hand when she was shot. She prudently kept her eight-year-old charge away from the window, when she was investigating the noise she is reported to have heard. The presence or absence of Atatiana's handgun has been deemed irrelevant by Fort Worth's Mayor and by a former judge.  From wfaa.com: As for what the former Fort Worth officer's defense might be for shooting into Atatiana Jefferson's house though a backyard window, attorney and former judge Rob Cañas agrees with the statement of Fort Worth Mayor Betsy Price. “The gun is irrelevant,” she said Monday of the weapon found inside Atatiana Jefferson's home. “She was in her own home. Atatiana was a victim.” “She was completely in a legal position, in the right position to be,” Cañas said. The facts of the case available to the public have been published in numerous sources on the Internet. About four seconds elapsed from the time Aaron Dean saw a person on the other side of the window until he fired the fatal shot. On 20 December, former officer Dean was indicted by a Fort Worth grand jury on a murder charge. Dean was a young officer, 34 years old, with limited experience. He had been on the job for a year and a half. He resigned shortly after the shooting. Atatiana's death was, and is, tragic for all concerned. It is difficult to see any justification for her shooting. Many have labeled this shooting as racist. It is hard to see it as racist when it would have been very difficult, if not impossible, for the officer to know whether the person on the other side of the window was black, white, Hispanic, Asian or any other description. The room was dark. The shooting happened very quickly. Atatiana's skin color was not very dark. This shooting is not like the Houston killing of the Tuttles during a no-knock raid. It was not planned with false information. It appears to be much closer to the tragedy that happened on July 15, 2017. On that date, Minneapolis police officer Mohamed Noor shot and killed Justine Ruszczyk, while responding to a potential sexual assault call.  Noor was sentenced to 12 and 1/2 years in prison after being convicted of third-degree murder. Both officers fired on and killed young women in circumstances which did not appear justified.  It appears Mohamed Noor could see Justine Ruszczyk in Minneapolis more clearly than Aaron Dean could see Atatiana Jefferson in Fort Worth. Former officer Aaron Dean has not offered a defense. Former officer Mohamed Noor claimed he was justified because Justine Ruszcyk moved her hand, where he could not see it. My suspicion is former officer Aaron Dean did not fire the shot intentionally. It is merely a suspicion, of course. He only fired once. He has not given a defense, as far as I know. He has not claimed the shooting was justified. There have been numerous other situations where officers fired without intending to do so.  This article explains some of the mechanisms where firing under stress occurs unintentionally. It is more common than most people think. If the shot was unintentional, it does not relieve Aaron Dean of responsibility, even criminal responsibility, for a crime such as negligent homicide. It appeared that former officer Aaron Dean was primed to find a burglar, perhaps armed and dangerous. He may have rehearsed scenarios in his mind, where he confronted a burglar. He acted as if he were confronting a suspect when he saw Atatiana in a darkened room at about 2:30 in the morning. Unintentional police shootings are rare, but far more common than any would like them to be. Police officers are people. People make mistakes. Sometimes those mistakes are deadly. No one and no group of people is perfect. This situation is a terrible tragedy for all concerned. About Dean Weingarten: