https://www.youtube.com/embed/IxuJlMIyBb4
U.S.A. –-(Ammoland.com)- In a time where we are so blessed to have so many excellent choices for any kind of pistol, including completion ready pistols, it’s kind of rare for one to really stand out, but the X5 legion definitely does. This is the Sig P320 X5 Legion, that’s right, it has three names, but it just may be worthy of it. I can’t think of another gun that packs so many features and is more competition ready right out of the box, at a price that is very impressive. SIG P320 X5 Legion The most shocking thing when you pick up the P320 Legion is the weight. This polymer gun weighs in at 43.5 ounces which is crazy for a polymer gun and more along the lines of what you’d expect from a solid steel frame gun like the CZ Shadow 2 that weighs in at 45.5 ounces. What Sig has done is infuse the polymer frame with tungsten making it drastically heavier than any other polymer gun, I’m going to say ever, I know I can’t think of a polymer gun that comes close to this weight. This does several things for the shooter. First it will reduce felt recoil and make the pistol a flatter shooter, and give you the ability to get on that next steel plate quicker. Also, being a polymer gun, with the weight of a steel gun, it has a very unique recoil impulse because the polymer has a little flex and the weight just gives it kind of the best of both worlds scenarios in terms of recoil. It’s kind of hard to explain, but it’s a very pleasant, mild recoil, and extremely easy to get back on target Out of the box, the P320 Legion will come with really nice Dawson fiberoptic front sight and an adjustable rear; but more importantly it comes fully optic ready. I wanted to see how fast I could run this thing, so almost immediately I ripped off that optics plate, and mounted a US Optics DRS on a Springer Precision adapter plate. I also wanted to co-witness the dot with my iron sights, so I removed the front sight as well and replaced them with SIG LITE suppressor height sights. When you remove the rear optics plate on the P320 Legion you actually lose your rear sight dovetail, but what’s cool about my Springer Precision adapter plate is it has a dovetail cut in the rear, giving the ability to re-install the rear sight. This gave me the exact setup I was looking for, allowing the DOT in the DRS to perfectly co-witness with the iron sights. I really like running optics on pistols like this, it helps me find the dot a little quicker and I feel I can move from target to target a little faster. 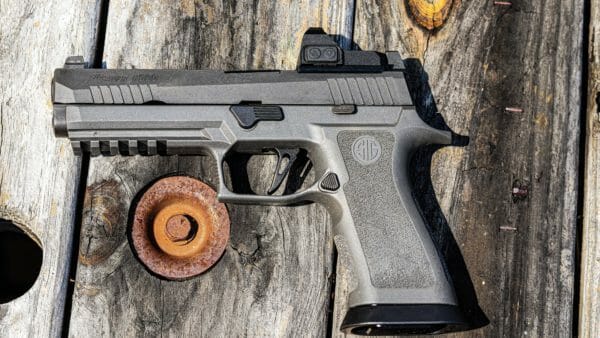 SIG P320 X5 LegionThe recoil system is also dramatically different than any other P320. Instead of a captive system, the legion X5 has a 1 piece guide rod, and you can change the weight of the spring you use. It comes with a heavier one that will work with just about any normal factory load, but there’s also a lighter weight spring in the box. I actually switched mine out to the lighter 12 pound spring, and it worked flawlessly with everything we ran through it. This guide rod is designed to not just work like a 1911, but you can further tailor it because it will work with any 1911 recoil spring. Lighter recoil springs make the felt recoil ever so slightly lighter, and just make the gun feel faster. Basically, you’d like the spring to be as light as possible without affecting reliability. Like I said, we still had perfect reliability with the lighter 12 pound spring that comes in the box. 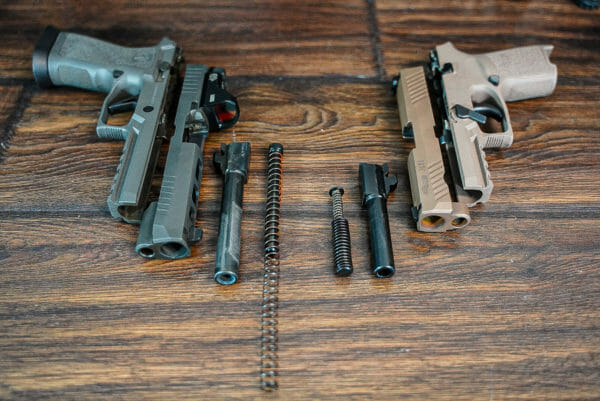 SIG P320 X5 Legion next to SIG P320. Note the difference in recoil systems.The last feature is the trigger, and the trigger is very good, it’s very light, weighing in at 3.5 pounds on my scale. This is also the best P320 trigger that I can ever remember messing with, there’s very little take-up and the break is pretty crisp. However, if I were going to complain about anything in this package, the trigger would be it. Now, it may be slightly nitpicky, but the reset isn’t quite where I’d like it on a pistol that is just absolutely phenomenal in every other aspect. I have to admit, I do wish the reset was a little shorter, and I personally would be willing to pay a bit more to get it. It's a small thing, and really the only slight blemish on an amazing package. To be honest, if it really bothers you, you could probably buy this gun and an aftermarket trigger, and still have considerably less in cost than any of the competition.  Another highlight is the grip itself. It has a good texture to it, and I love the design and feel on this grip module. The beavertail along with the generous undercut feels very good in the hand. The massive flared magwell is also another nice touch. It comes with 3 17 round mags that have awesome legion marked metal plates, another nice little touch. There’s also a five-inch bull barrel with a slight crown to keep the pistol very accurate. The top of the slide has some lightening cuts, which may seem odd on a gun this heavy, but what they are doing here is by lightening the slide and having a very heavy frame, giving the pistol the absolute best recoil impulse possible. 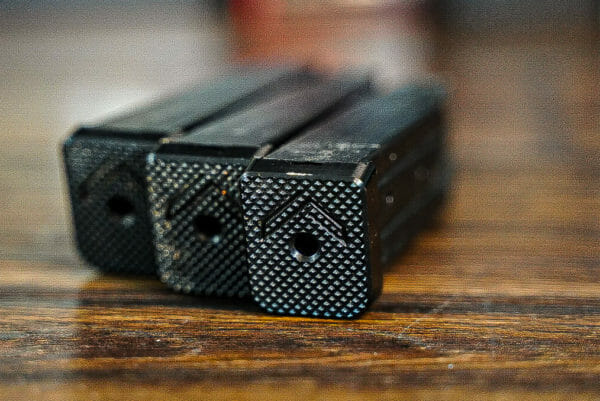 SIG P320 X5 Legion comes with three 17 round magazines that fit flush in the pistol. 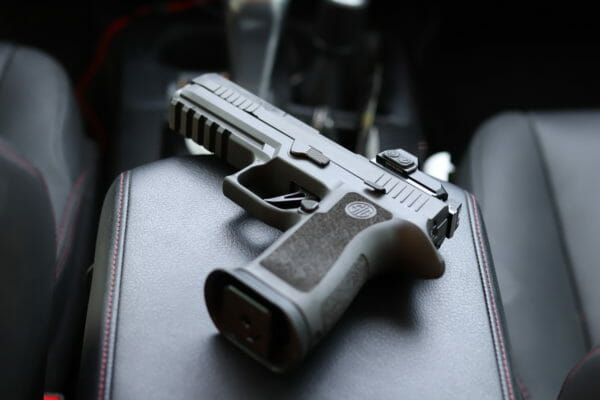 SIG P320 X5 LegionThe Sig P320 X5 Legion has been nothing but reliable, it was so enjoyable to shoot that we blew way past the normal 1000 rounds we do in a review. This thing is probably approaching 2000 rounds without cleaning or maintenance of any kind, and it's still running perfectly. With the somewhat unique, although overwhelmingly pleasant recoil impulse from the X5 Legion, this thing just wants to be run fast. Having the flex of a polymer gun, with the weight of a steel gun, is an amazing experience and I wouldn’t be surprised if you start seeing other companies with this same setup because it is very, good. That brings up another thing, this gun is just a ton of fun to shoot. The ergonomics are great, it feels like an extension of your hand; it also just has that perfect balance in your hand when shooting, and just runs fast and flawlessly. It has been a while since I was this impressed with a pistol as a package, that is also such a great deal; given the features, you get for your money, right out of the box. If you’re interested in something along these lines I couldn’t recommend anything higher then the SIG P320 Legion X5. You’d be very hard-pressed to find a gun that packs this many features, is this good, for this price. The SIG P320 X5 Legion won’t disappoint, and won’t leave your bank account on life support like so many other guns along these lines will.