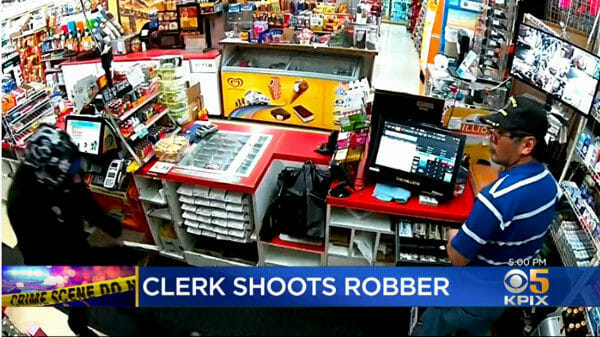 Screenshot from surveillance video at Kam's Market ShootingArizona -(Ammoland.com)- An attempted armed robbery and self-defense shooting occurred in Kam's Market in Bay Point, California.  Bay Point is in Contra Costa County in the East San Francisco Bay area. From multiple published accounts, Mark Kaspowitz was starting to close up for the night at about 11 p.m. on 22 December 2019.  Two masked assailants came into the store. One of them jumped the counter, confronted Mark, attacked him, and took money from the register. The assailant pistol-whipped Mark with what appeared to be a semi-automatic pistol, beating him down to the floor. The assailant used both hands to grab the cash. From the floor, Mark manages to access a store owned pistol kept in a drawer not far from the cash register. The robber noticed and attacked Mark again.  Noticing Mark's access to the store pistol, the assailant recovers the pistol he brought to the store and again used it as a club. Mark fired a shot, pointing the store pistol upwards at the person who was above him and pistol-whipping him. The robber fled the store, only to die outside, yards from the entrance.
https://www.youtube.com/embed/ubM4v4ZnBek
Mark Kaspowitz is reported to be a military veteran of the Air force, from 1980 to 1984, with about 20 years experience as a security guard. He said he is 56 years old. After the shooting, Mark gave an interview to reporters in the video below.
https://www.youtube.com/embed/KD0-iDoyXbI
Here are a few things to consider from Mark's experience. Situational awareness: Mark was busy with the store close down procedures. The store considers robbery a serious threat, or it would not have a store pistol available to employees. Closing time is a prime time for robbers. All of the days proceeds are likely to be available, and it is likely there will be fewer customers to interfere. Mark did not notice the robbers until one was within 5-6 feet, pointing a gun at him. Denial of reality: Mark had a masked man with a gun pointed at him from 5-6 feet away, at closing. He still denied the reality, saying: “At first, I thought it was someone playing a joke.” Ineffective disarm: This may be why Mark makes the ineffectual disarm attempt, simply pushing the robber's gun aside. The attempt is quickly and easily defeated. If the robber's gun were operative and loaded, Mark could have been shot.  A disarm attempt should be all-out, a matter of life and death. The robber was relatively unguarded. A serious disarm would probably have succeeded. Firearm stored off body: The store firearm was stored in a drawer close to the register. If Mark had noticed the masked robbers coming in, he might have had time to access it before the robber cleared the counter. The difficulties Mark encountered show the value of on the body carry. Contra Costa County issues very few concealed carry permits. In 2016, the estimated number of permits was 263. The population of Contra Costa County is over 1.1 million people. The chance of Mark getting a permit was virtually nil. Focus on survival: Mark focuses on survival, rather than saving the store some money.  This is positive. Mark said the money was the least of his concern.  He only accesses the store firearm after being attacked.  Then he hears the assailant saying “He's got a gun”, indicating there was more than one assailant, increasing his concern for his and his co-worker's survival. He thinks he hears a shot, as he is being pistol whipped again, just before he fires. It may have been the blow to the head the assailant delivered a second or so before Mark fired, which Mark interpreted as a gun shot. Lack of instantaneous effect from the shot: Mark says he did not know if he hit the assailant or not. There was no obvious, instant, effect from the shot.  We do not know the caliber of the small, black, semi-auto pistol which Mark accessed. Robber's guns ineffective: It is likely the robbers guns were not operative, either through operator ignorance, mechanical problems, being unloaded, fake, or toy guns. If toy, the gun was sufficiently hard to wound Mark as he was being pistol whipped. Using ineffective guns in a robbery is common. Alert readers will notice alternative courses of action which Mark could have taken. The list above is not exhaustive or complete. It is a compilation of some of the more obvious things to be considered from the robbery and shooting at Kam's Market in December of 2019. It is not meant to denigrate Mark's successful defense. Commenters are free to discuss potential problems with Mark's interview, and other areas not considered above. About Dean Weingarten: Dean Weingarten has been a peace officer, a military officer, was on the University of Wisconsin Pistol Team for four years, and was first certified to teach firearms safety in 1973. He taught the Arizona concealed carry course for fifteen years until the goal of Constitutional Carry was attained. He has degrees in meteorology and mining engineering and retired from the Department of Defense after a 30-year career in Army Research, Development, Testing, and Evaluation.