Medal of Honor MondayUSA – -(AmmoLand.com)- Remembering a ceremony honoring Army Staff Sgt. Ronald J. Shurer II with the Medal of Honor for his actions during Operation Enduring Freedom in Afghanistan, I thought it would be fitting to highlight another recipient who earned his medal during that same mission. Marine Corps Lance Cpl. William Kyle Carpenter survived to tell his story, unlike several other men who sacrificed their lives to save their comrades. 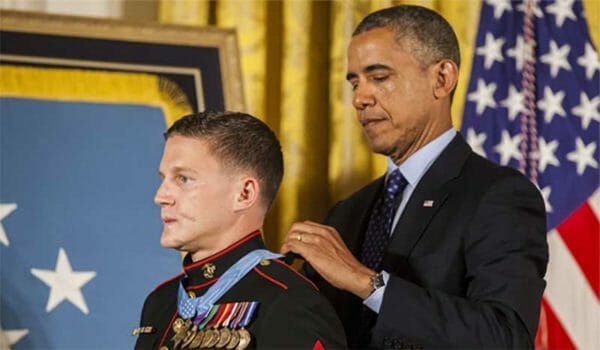 President Barack Obama places the Medal of Honor around retired U.S. Marine Corps Cpl. William Kyle Carpenter’s neck inside the East Wing of the White House, June 19, 2014. Marine Corps photo by Cpl. Michael C. GuintoCarpenter grew up in Flowood, Mississippi, in the 1990s and joined the Marine Corps in 2009 in South Carolina, less than a year after graduating from high school. Within a year of finishing basic training, he was deployed to Afghanistan’s Helmand Province in support of Operation Enduring Freedom to serve as a squad automatic rifleman with the 1st Marine Expeditionary Force. Carpenter was part of a platoon-sized coalition force that included the Afghan National Army. Together, they had set up Patrol Base Dakota in a small village on Nov. 19, 2010, to disrupt insurgent activity and provide security for local Afghans. Two days later, on Nov. 21, 2010, Carpenter and Lance Cpl. Nicholas Eufrazio were manning a rooftop security position on the base’s perimeter when Taliban insurgents attacked with grenades, one of which landed in the sandbagged area the two men were in. Without thinking twice, Carpenter rushed toward the grenade to try to shield Eufranzio from the blast. When it went off, his body absorbed most of it. 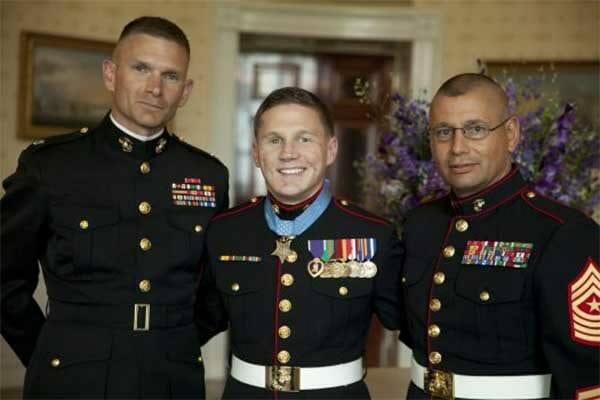 U.S. Marine Corps Cpl. William Kyle Carpenter with Fellow Marines. Carpenter, center, poses for a photo with Marines following his Medal of Honor award ceremony at the White House. Marine Corps photo by Cpl. Michael C. Guinto.Eufranzio was spared, but Carpenter was severely injured. He survived, but not without spending two and a half years recuperating at Walter Reed National Military Medical Center in Bethesda, Maryland. He was medically retired as a Marine corporal on July 30, 2013. For his selflessness and devotion to duty, Carpenter was awarded the Medal of Honor on June 19, 2014, in a ceremony at the White House. “You notice Kyle doesn’t hide his scars. He’s proud of them and the service they represent,” then-President Barack Obama said before putting the medal around the Marine’s neck. “You displayed heroism in a blink of an eye that will inspire for generations – valor worthy of our nation’s highest military decoration.” Carpenter became the third Marine and the 15th overall recipient of the medal for actions in Iraq or Afghanistan. He went on to attend college at the University of South Carolina and occasionally speaks to groups about his experiences. Thank you, Corporal Carpenter, for your sacrifice and honor! Follow the Department of Defense on Facebook and Twitter!