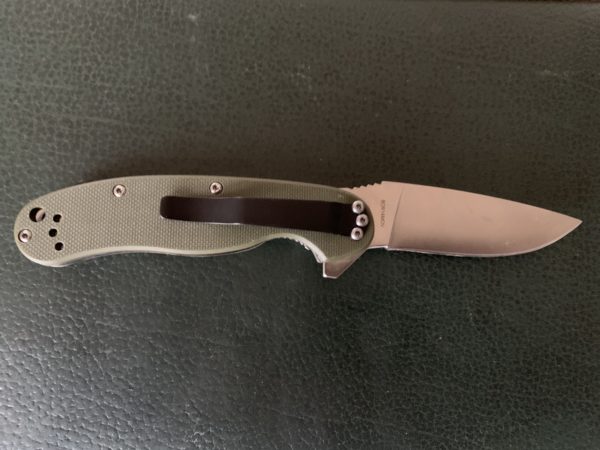 The Pachmayr Snare is a nice mid-sized EDC.U.S.A. –-(Ammoland.com)- I started testing the Pachmayr Snare knife this week. At first blush, I thought that it was just a hair too thick in the handle and a little too short overall. After opening it and using it I totally did a 180 and liked it. Yes, I like a little longer blade but with 2 5/8” of cutting blade, it will more than suffice for my EDC needs. Pachmayr Snare Folding Knife For three reasons I feel like that I really have a firm grip on the Pachmayr Snare while holding it: I have been testing a lot of thin profiled knives lately which I’ve grown fond of since they are sleek and fit fine into my pocket. Thick knives make it hard to retrieve change or my truck keys out of my pocket because they’re too bulky and in the way. But after testing this Pachmayr Snare it is refreshing to hold a folder with a full handle. Plus, I like the feel and the looks of the Drab Olive textured G10 handle. Another feature that you may like is that it comes with a pocket clip that is drilled so you can move it into four different positions. That way no matter left or right pocket, blade point up or down, it can accommodate whichever position that you desire. And it also has a hole if you want to tie on a lanyard. The blade has what I would classify as a drop point with the spine ground down so it has a point. Due to this design, it is able to perform all of your stabbing tasks. The blade is made out of 8Cr14Mov Steel and came from the factory razor-sharp, unlike a lot of knives that I’ve tested. As you know, I favor a little larger folder. But if you’re looking for what I’d classify as a mid-size folder for a good EDC, then you need to take a look at the Pachmayr Snare folder. The Pachmayr Snare has an MSRP of $32.98 which seems like a good price for all of the features that you get. And as is usual, we will close with the specs. The Snare is a great knife for your everyday carry kit. With a drop point style blade and G10 handle, this knife is ready to be put to the test. Its sleek design allows you to comfortably carry this knife in your pocket or on your belt without the constant shifting of larger designs. From household jobs to commercial tasks this knife will not disappoint.
About Tom Claycomb