After years of research and development, Colt releases a refined and upgraded Colt Python revolver. The legendary double-action, which originally debuted in 1955, returns in stainless steel in 4.25”. 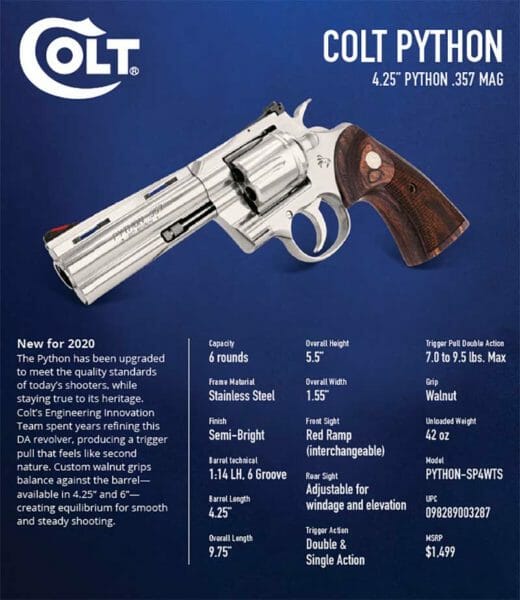 Colt Python Double-Action Revolver 4.25 .357WEST HARTFORD, CONN., – -(AmmoLand.com)- After years of research and development, Colt releases a refined and upgraded Colt Python. The legendary double-action revolver, which originally debuted in 1955, returns in stainless steel in 4.25” and 6” barrel lengths. “We know the Colt Python is one of the most beloved and collected firearms in American history, and its re-release has long been demanded by enthusiasts,” said Justin Baldini, Product Director at Colt. “We took our time on R&D – we needed to be sure the look and performance of this redesign lived up to its legendary name and kept its impeccable reputation for quality and accuracy. This new Python lives up to the legend in every way.” Colt Python Revolver The Colt Product Innovation Team refined the design of the new Colt Python and performed rigorous testing, ensuring it meets the demands of shooters and collectors. Numerous improvements were made to reinforce the revolver, including the use of stronger stainless steel alloys and a re-designed rear sight which allows for a 30% increase in the cross-sectional area of the top strap — meaning more steel beneath the rear adjustable target sight, for a stronger revolver and more robust shooting experience. Minimizing the amount of parts in the trigger action has simplified the mechanism, elevating its reliability and allowing for more straightforward maintenance. The testing process included over 40,000 trigger pulls on a single Python. Trigger pull scans show lighter trigger pull weights, less friction and increased consistency, re-enforcing the Python’s reputation as a gun that can be heavily used and passed down through generations. Finally, Colt builds on the modern Snake Gun legacy by adding features such as a recessed target crown, user-interchangeable front sight, and an updated Walnut grip to make this the most user-friendly Python ever. The DA revolver is chambered in .357 Magnum and also accommodates 38 Special cartridges. The Python has been extremely popular with both target shooters and law enforcement, and featured in countless TV series, movies and video games including “The X Files,” “The Walking Dead,” “Hawaii 5-0,” “Starsky and Hutch,” “John Wick” (2014), “American Gangster” (2004), “Fight Club” (1999) and “King Kong” (1976). The new Colt Python .357 Magnum is available now through Colt stocking dealers for $1499 MSRP. 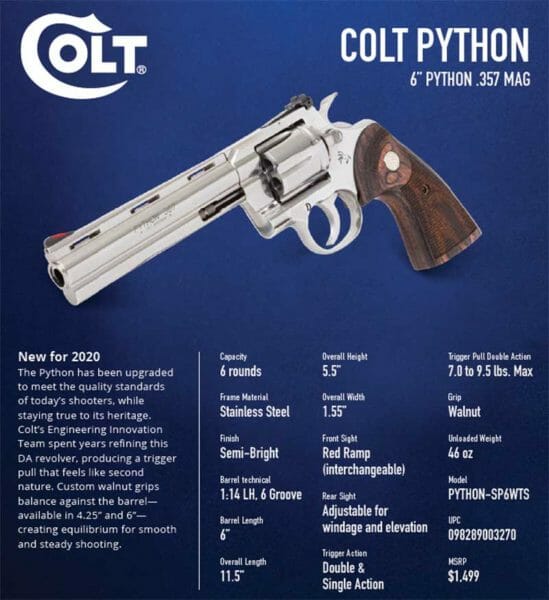 About Colt’s Manufacturing Company LLC Colt’s Manufacturing Company LLC (www.colt.com) is one of the world’s leading designers, developers and manufacturers of firearms. The company has supplied civilian, military and law enforcement customers in the United States and throughout the world for more than 175 years. Its subsidiary, Colt Canada Corporation, is the Canadian government’s Center of Excellence for small arms and is the Canadian military’s sole supplier of the C7 rifle and C8 carbine. Colt operates its manufacturing facilities in West Hartford, Conn., and Kitchener, Ontario.