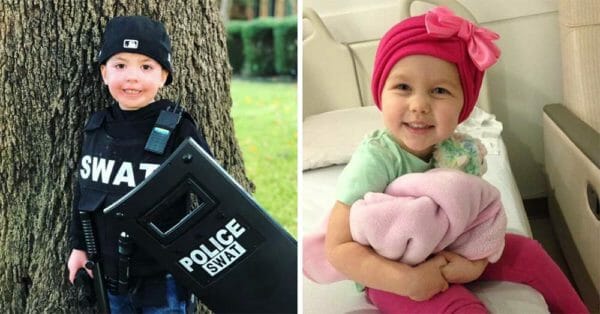 Henry Repeating Arms has donated more than 120 limited edition rifles to benefit Beckett Burge (L) of Princeton, TX and Sadie Kreinbrink (R) of Ostrander, OH to assist with the medical costs associated with their cancer treatments.U.S.A. –-(Ammoland.com)- Henry Repeating Arms President and Owner, Anthony Imperato, first learned of 3-year-old Sadie Kreinbrink a few months after she was diagnosed with Embryonal Rhabdomyosarcoma, a malignant childhood tumor requiring 66 weeks of chemotherapy treatment. When Sadie’s mother reached out to Henry Repeating Arms, Imperato immediately offered assistance through Henry’s Guns For Great Causes program, a charitable arm of the American firearms manufacturer focused on raising money for families of sick children and other worthy causes through the sale of customized limited edition rifles. A few months later, a heart-wrenching photo of 4-year-old Beckett Burge of Princeton, TX went viral. The photo, taken by Beckett’s mother, shows Beckett hunched over a toilet sick from his chemotherapy and being comforted by his sister. As it pulled at heartstrings across the country it also caught the attention of Imperato. Henry Repeating Arms reached out to the mother, Kaitlin Burge, and offered to create and donate a series of rifles that would be sold to raise money for Beckett’s treatment. Under the Guns for Great Causes program, Henry Repeating Arms has donated a series of 66 “Sweet Sadie” edition rifles and 60 “Beat It Like Beckett” edition rifles, both of which were designed and embellished by Baron Engraving of Trumbull, CT who donated their services. All proceeds from the sales of these Guns For Great Causes rifles will be presented to the Kreinbrink family and the Burge family, respectively, to help cover the expenses associated with medical treatment and recovery. 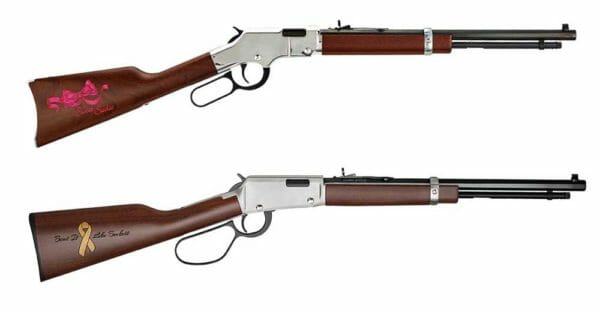 The “Sweet Sadie” edition rifle (top) and the “Beat It Like Beckett” edition rifle (bottom) are available for sale through Henry Repeating Arm’s website. All proceeds will be given to the children’s families.Imperato explains, “More often than not, the gun industry is painted in a negative light by the press and media. I started Guns For Great Causes to change that narrative and create something positive.” He continues, “These two kids have a smile that stole my heart and I want to sincerely thank everyone who purchases one of these rifles in advance.”  Sadie Kreinbrink of Ostrander, Ohio was born August 10th, 2016 and was diagnosed in February of 2019. Kaleigh Kreinbrink, Sadie’s mother says, “Sadie has been so brave through this process. On her bad days, her brother is her biggest supporter.” She continues, “He always knows how to make her feel better. Sadie is so full of life and love even through this tough journey. We can’t thank Henry Repeating Arms enough for what they’re doing for us.” Sadie enjoys visiting the zoo, driving her pink Jeep, and collecting Hatchimal™ toy figurines. The .22-caliber “Sweet Sadie” edition rifle is built on Henry’s new Golden Boy Silver Youth platform with a nickel-plated receiver cover, buttplate, and barrel band. The genuine American walnut buttstock is engraved with a flowing bow and the words, “Sweet Sadie.” The engravings are further embellished with a hand-painted pink fill. The limited edition of 66 rifles represents each week that Sadie must undergo chemotherapy and each of the rifles is marked with a unique serial number ranging from “SADIE001” to “SADIE066.” To learn more about the “Sweet Sadie” edition rifles from Henry Repeating Arms or make a purchase visit: www.henryusa.com/sweetsadie. Beckett Burge of Princeton, Texas was diagnosed with leukemia more than a year ago and has been undergoing treatment ever since. Beckett is currently receiving chemo on a nightly basis and returns to his clinic monthly for chemo through his port. He’s on steroids 5 days a month and receives a double dose of chemo once a week. Kaitlin Burge, Beckett’s mother wrote in a recent Facebook post, “When people look at him, they’re shocked to hear he has cancer. He’s energetic, he has hair, he’s thriving right? The answer is, no.” She continues, “That tiny, 3-foot, 30-pound body is fighting daily.” Beckett loves baseball, country music, riding his bicycle, swimming, and pretending that he’s a policeman. Beckett is undergoing a trying regiment of steroids and chemotherapy until August 2021 for his acute lymphoblastic leukemia diagnosis, for a total of more than 3 years of treatment. The “Beat It Like Beckett” edition rifles are a unique configuration with a large loop lever, a brushed metal receiver cover, and a 17” blued steel octagon barrel. The buttstock engraving portrays a hand painted gold ribbon, the symbol for the fight against childhood cancer and the words “Beat It Like Beckett.” Unique serial numbers are assigned to each to rifle from “BECKETT01” to “BECKETT60”. To learn more about the “Beat It Like Beckett” edition rifles from Henry Repeating Arms or make a purchase visit www.henryusa.com/beckett. Henry firearms can only be purchased through a licensed firearms dealer. For more information about Henry Repeating Arms and its products visit henryusa.com or call 866-200-2354. About Henry Repeating Arms:

Henry Repeating Arms is one of the leading rifle and shotgun manufacturers in the United States and a world leader in the lever action category. The company motto is “Made in America, or not made at all” and its firearms come with a lifetime guarantee backed by award-winning customer service. The company is also known for its charitable endeavors under its Guns For Great Causes program, which focuses on sick children, both individual cases and children’s hospitals, veteran and wounded veteran organizations, Second Amendment and wildlife conservation organizations. The company currently employs 535 people and has 250,000 square-feet of manufacturing space in its Rice Lake, Wisconsin and Bayonne, New Jersey facilities. The company is named in honor of Benjamin Tyler Henry who invented and patented the Henry rifle in 1860 – the first repeating rifle, the lever action rifle, which is America’s unique contribution to international firearms design and is one of the most legendary, respected and sought after rifles in the history of firearms. Visit Henry Repeating Arms online at www.HenryUSA.com, on Facebook at www.Facebook.com/HenryRepeating, and on Instagram @Henry_Rifles.