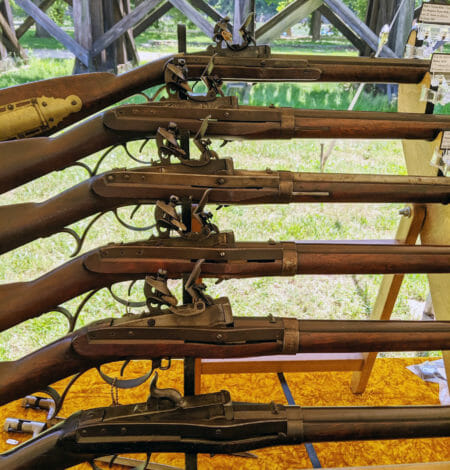 Rack of Hall rifles on display at Harpers Ferry Armory (T. Logan Metesh photo)Maine – -(AmmoLand.com)- John Hancock Hall was born on January 4, 1781, in Maine. He spent more than two decades working at the Harpers Ferry Armory, and during that time, he developed a breech-loading rifle the likes of which had never before been seen, and he contributed to the development of truly interchangeable parts and the machines needed to make them. Hall was an inventor, a machinist, and a gunsmith. While seeking a patent on his breech-loading rifle in 1811, he encountered Dr. William Thornton, the first Superintendent of the Patent Office. Thornton held many titles in addition to his position at the Patent Office, the most applicable being that of an inventor. Hall found out firsthand, however, that Thornton might not have been much of an inventor after all. When he submitted his patent application, Thornton claimed to have already come up with the idea and even created a working version of the gun, despite having not patented it yet. Because he had beat Hall to the idea, Thornton insisted they be listed as co-inventors and patent assignees. If Hall refused, Thornton would reject the patent outright. Hall relented and, on May 21, 1811, received a patent in both his and Thornton’s names. With patent in hand, Hall set his sights on a government contract. He said that a thousand of his guns could be “taken apart & the limbs thrown promiscuously together in one heap” and then have parts from the pile taken equally “promiscuously from the heap & will all come right.” In 21st century terms, Hall claimed that you could strip a thousand of his rifles down to parts, jumble them all up in a pile, and then reassemble them without any problems whatsoever. In an era of hand-fitted arms with no interchangeability to speak of, this appealed to the government and Hall finally secured a government order in December 1816 – for a measly 50 guns. After considerably more back and forth over the next couple years, Hall secured a contract with the government in the spring of 1819 to head to the arsenal at Harpers Ferry, Virginia, to set forth making his guns and perfecting the concept of interchangeability. Hall was not, in the eyes of the government, a gunsmith. Instead, he was more of a machinist, perfecting the experimental concept of parts uniformity. 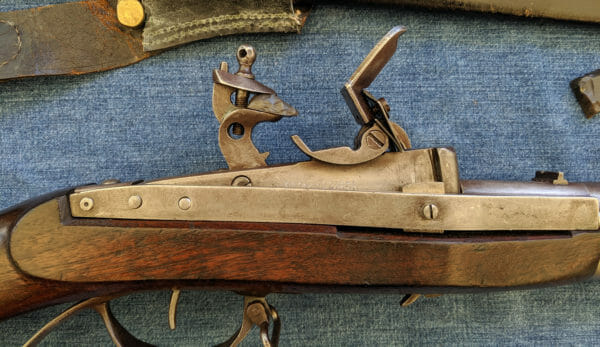 Profile view of an open Hall breechblock (T. Logan Metesh photo)Hall’s success in this area was due to the masterful machinery that he devised and the exacting detail to which he subjected it. Of the more than $400,000 spent on the Rifle Works between 1819 and 1835, more than one-third of it went toward tools and machinery. That’s three times as much as was spent on the same at the main armories at both Harpers Ferry and Springfield. The initial contract of 1819 gave Hall an annual salary of $720 and a royalty of $1 per gun completed. By the time his contract renewal of 1827 came due, his salary had been raised to $1,450. At this point, the nation as a whole took notice of the work being done at the Rifle Works. John received orders for guns from 96 congressmen, two foreign governments, numerous private individuals, the Marine Corps, and multiple state governments wishing to issue Hall’s rifles to their militias. Because John’s work was funded by the Federal government and was being done at a Federal facility, law stipulated that he could not fill orders for state militias. He could, however, allow a private contractor make the guns for the states. By 1834, Hall and Simeon North (his contractor of choice) had accomplished something quite remarkable: parts made in Connecticut were completely interchangeable with parts made some 400 miles away in Virginia. Never before had this been accomplished by anyone, anywhere. 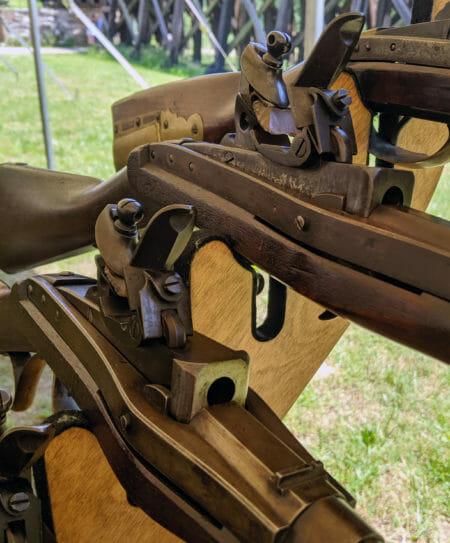 View of the muzzle end of Hall rifle breechblocks (T. Logan Metesh photo)Unfortunately, within just a few years, Hall’s health began to fail. In 1837, Hall developed tuberculosis. In February 1840, the Secretary of War told the House Committee on Military Affairs that he had no use for Hall’s rifle anymore. Later that year, he and his wife went to Missouri to visit family. John passed away there on February 26, 1841, at the age of 60. Hall never achieved his personal goal of seeing his patented rifle adopted, but he ended up achieving something much larger and longer-lasting. When Harpers Ferry experienced their worst flood to date in 1852, some 10,000 firearms were damaged. In an effort to save as many as they could, the guns were completely disassembled, put into piles, cleaned of any rust, and then reassembled. Astonishingly, all 10,000 guns were put back into working order without any need for filing or additional fitting, despite now being comprised of parts from an untold number of individual guns. All thanks to Hall’s methods. About Logan Metesh