Opinion by Dan Wos
Author – Good Gun Bad Guy
When the Gun-Grabbers can’t win the debate, they change the rules. 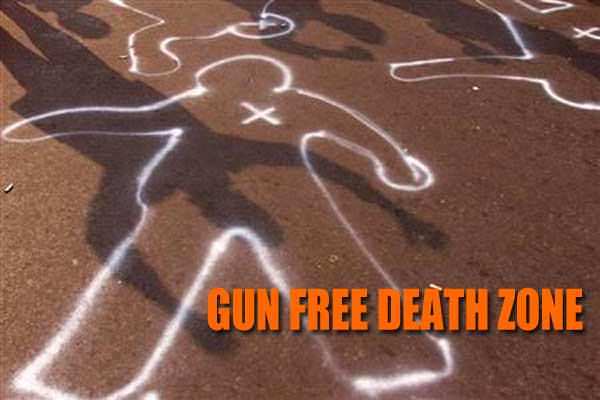 Gun Free Death ZoneUSA – -(AmmoLand.com)- In yet another attempt to discredit lawful gun-ownership, radical anti-rights groups like Moms Demand Action, have re-defined “The Gun Free Zone” because apparently, you had it wrong this whole time. First, lets look into the minds of the anti-gun crowd so we can understand their madness. In an article by Meg Kelly – Video Editor for “The Fact Checker,” published in the Washington Post, Kelly made the following claim: “gun-free zone” is subject to interpretation. Kelly’s claim is based on the notion that because Moms Demand Action has fabricated their own definition of “Gun Free Zone,” the term is now indiscernible. This is convenient for the anti-gun crowd because it muddy’s the waters and makes the measurement of “gun-free zone death” data nearly impossible. Moms Demand Action “Gun Free Zone” Definition is as follows: “Areas where civilians are prohibited from carrying firearms and there is not a regular armed law enforcement presence.” Well, this changes everything. At least in their minds and among those who aren’t paying attention. So, it looks like, based on the “new” definition, we are supposed to eliminate places like Sandy Hook, Parkland and others when trying to measure the death and destruction that occurs in areas where people are prohibited from defending themselves with a firearm. According to the leftist gun-grabbers, there’s nothing to see here because as long as there was a security guard on duty or law enforcement in the vicinity, it was not a Gun Free Zone. Do we all remember Scot Peterson, the Sheriff’s Deputy at Marjory Stoneman Douglas High School, who ran and hid while students were being massacred? Don’t forget, civilians were prohibited from having guns on campus, leaving the safety of the students in the hands of Peterson, but because he was armed, and according to the new left-wing definition of GFZ, Parkland shouldn’t be counted as a GFZ. Keep in mind, according to the Anti-Gun Radicals, as long as a 500,000 square foot school has one armed security guard, even while prohibiting teachers, staff and lawful gun-owners from carrying a gun, it should not be considered a Gun Free Zone. The anti-gun mob doesn’t want the “Gun Free Zone” being blamed for mass-killings because they support them. The creation of Gun-Free Zones are a political win for the left and another roadblock for lawful gun-owners. This is why the political left cheer in the streets when Walmart declares it’s stores gun-free. Should the public become wise to the dangers of the GFZ, the Anti-Gun Radicals would have to admit that they share responsibility for the loss of innocent lives. Denying the dangers of GFZ’s has become impossible, so rather than admit they support these “Killing Zones,” they attempt to change the definition so you can’t measure the data. They desperately scrub the blood off their hands, while simultaneously using school killings to support gun-control legislation. Yes, they want it both ways. Kelly even said in her 2018 article: “Without a commonly accepted and uniform definition of “mass shooting” or agreement on what constitutes a “gun-free zone,” it’s difficult to settle this debate.” Of course, it is. That’s the idea. The numbers show us that GFZ’s are deadly killing zones because the people are sitting ducks and the Bad Guys have zero opposition, but the gun-grabbers want desperately for that truth to be clouded in a dispute over the definition. Regardless of the left’s interpretation, the Gun-Free School Zones Act of 1990, had a provision for schools to authorize designated people to carry a gun on campus. So let’s be clear. Just because an armed security guard is on the premises, does not disqualify the area as a GFZ. There should be no dispute about the definition of a Gun Free Zone. A Gun Free Zone is any area where citizens are prohibited from carrying a firearm. Based on reported accounts in a study conducted by Gary Kleck and backed by CDC data, there are approximately 2.46 million defensive gun uses in America per year. In other words: “lives saved because of guns.” These are specific cases where the presence of a gun stopped or deterred a threat. The anti-gun left desperately clings to the claim that armed citizens do not stop mass-killings. How do they measure something that hasn’t occurred? When the anti-gun crowd tries to claim armed citizens do not stop killers, they are trying to use a hypothetical argument as data. Unlike the Kleck study, the claim that “armed citizens do not stop mass-killings” is impossible to measure because the “killing” they are referring to never happened and the “armed citizen” they are referring to, never existed. The entire scenario they are creating, never occurred, therefore it is impossible to measure. By changing the definition of Gun Free Zone, the anti-gun crowd is able to avoid responsibility for putting children in danger while continuing to portray themselves as virtuous.