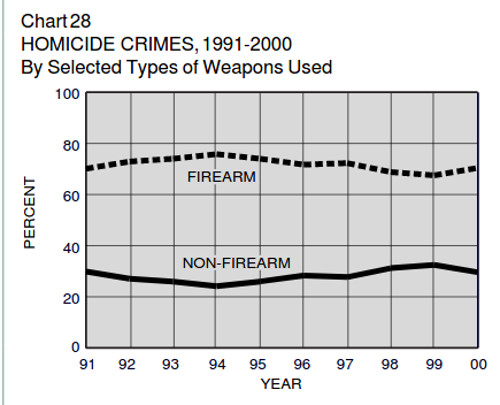 Chart from California DOJ report, cropped and scaled by Dean WeingartenU.S.A. –-(Ammoland.com)- A study of the effects of California's institution of Universal Background Checks, along with a state ban of firearms ownership for people who had committed a violent misdemeanor, has been published in The Annals of Epidemiology, volume 30, February, 2020. The study covered a decade before the laws were passed to a decade after the laws was passed. It found the laws had no effect on firearms homicides or suicides. Here is the abstract of the paper,  from Science Direct: Purpose In 1991, California implemented a law that mandated a background check for all firearm purchases with limited exceptions (comprehensive background check or CBC policy) and prohibited firearm purchase and possession for persons convicted within the past 10 years of certain violent crimes classified as misdemeanors (MVP policy). We evaluated the population effect of the simultaneous implementation of CBC and MVP policies in California on firearm homicide and suicide. Methods Quasi-experimental ecological study using the synthetic control group methodology. We included annual firearm and nonfirearm mortality data for California and 32 control states for 1981–2000, with secondary analyses up to 2005. Results The simultaneous implementation of CBC and MVP policies was not associated with a net change in the firearm homicide rate over the ensuing 10 years in California. The decrease in firearm suicides in California was similar to the decrease in nonfirearm suicides in that state. Results were robust across multiple model specifications and methods. Conclusions CBC and MVP policies were not associated with changes in firearm suicide or homicide. Incomplete and missing records for background checks, incomplete compliance and enforcement, and narrowly constructed prohibitions may be among the reasons for these null findings. The statement that the firearms homicide rate did not change is not correct. It changed, along with the overall homicide rate and the non-firearm homicide rate. As with suicides, the decrease in rates was virtually the same. The percentage of homicides with firearms varied by less than 10% from 1991 to 2000. In 1991 it was 70.1%, in 2000, it was 70.4%, essentially no change. The study in the Journal of Epidemiology compared the California results with those in 32 control states, where the California law was not implemented. The comparison allowed them to determine the overall decrease in the homicide was not the result of the California law but was common to the control states as well. This is a powerful indictment against the usefulness of Universal Background Checks to reduce homicides or suicides. Not only did the California law prohibit private sales of firearms; firearm sales are not private when they are required to be conducted and recorded through a government system. California created a completely new class of prohibited possessors, people who had been convicted of a “violent” misdemeanor.  Most proposals for Universal Background Checks do not go so far.  California has a much more extensive list of prohibited possessors than exist in federal law. California firearms law is complex and convoluted. It is difficult to read and understand. Recently, it has been changing radically and rapidly. California has some of the strictest and most severe infringements on Second Amendment rights, of any state in the nation. In this most favorable approach to evaluating the effectiveness of Universal Background Checks (evaluating firearms suicides and homicides separately) and an entire new class of prohibited possessors, there was no measurable effect on firearms homicides, firearms suicides, or overall homicides or suicides. The authors of the study likely expected to find a positive effect. The fact they wrote the paper and reported the negative result reflects well on their integrity. Negative results are just as important in science as positive results. The conclusions show a certain bias. Translated into easily digested English, they say, these laws may have failed because they were not strict enough, or enforced rigorously enough. It is the classic leftist response. If the policy fails, it is not the fault of the policy. We just need to spend more and do more of the same! California has far more infringements on Second Amendment rights than most states in the Union. It is ripe to have numerous firearms laws struck down by the Supreme Court. About Dean Weingarten: