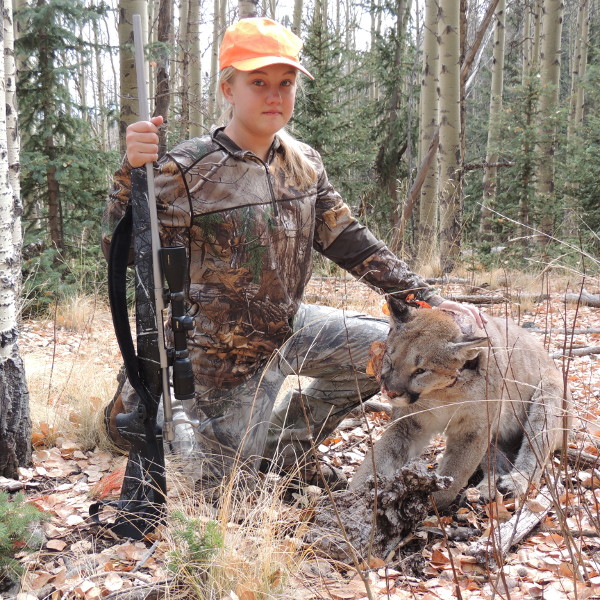 Picture by Caldwell family, with permission. Cropped by Dean WeingartenU.S.A. –-(Ammoland.com)- Mountain lion populations are on the increase and pose significant threats to unarmed humans.  Mountain lions were involved in a flurry of interaction with humans in the last two weeks of 2019. On 26 December 2019, Gary Gorney was hunting pheasants with his two dogs, in the Custer Mine hunting area near Minot, North Dakota. His dogs alerted him to something ahead. Instead of a pheasant, a large female mountain lion charged him out of the grass. He shot and killed the lion with his 9mm pistol. Gorney said he was talking on his cell phone when his German shorthair, Milly, went on point. He put the cell phone in his pocket with the expectation that a rooster pheasant was about to take flight. Instead, a large female mountain lion emerged from the tall grass and came right at him. “I dropped my dad’s 100-year-old double-barrel, I don’t even remember doing that, and went for the sidearm that I carry with me underneath my jacket,” said Gorney. “My instincts as a military law enforcement officer took over. There was no thought process. It was self-defense.” The mountain lion was within 10 feet of Gorney when it was hit by a bullet from Gorney’s 9-millimeter handgun. On the last day of the year, in 2019, near the Pine Canyon trailhead, a few miles Northeast of Tucson, Arizona, Pima County Sheriff deputies discovered three mountain lions were feeding on a human body.  The three lions were unafraid of people. The lions did not flee as officers approached. They were feeding on the body within sight of human homes. From kold.com: “Mountain lions are not routinely scavengers,” said Regional Supervisor Raul Vega of AZGFD in Tucson. “A mountain lion eating human remains is abnormal behavior. Those that do are more likely to attack a human being in the future. In addition, they did so 50 yards from a popular hiking trail and within sight of homes, and repeatedly showed no fear of responding officers. They were a clear and present danger to public safety.” The official line is the cause of death of the human has not been determined. As noted, mountain lions ordinarily kill their own prey, rather than feed on carrion. It is often difficult to determine the cause of death after a body has been mostly consumed. All three lions were killed, for the purposes of public safety. In the week before Christmas, 2019, mountain lions attacked five pet dogs in the Wood River Valley in Idaho.  From idahostatesman.com: The latest is the fifth mountain lion attack on dogs in the past week in the Wood River Valley, Fish and Game spokesman Terry Thompson said Monday in a statement. Three dogs have died due to the attacks. The dogs attacked included an Australian Shepard, a pudelpointer, and a Labrador. The attacks happened in back yards and near residences. As protections of mountain lions have ramped up in the last 40 years, mountain lion populations have increased. Increasing lion and human populations have lead to more interactions. As lions learn that humans and dogs are not to be feared, there have been more attacks. Humans that are armed can usually stop an attack and kill the cat. It is a surprise attack that is considered the most dangerous. Given that caveat, I have not found a single instance where a human armed with a firearm, was killed by a mountain lion. If readers know of such a case, please share it in the comments.
About Dean Weingarten: