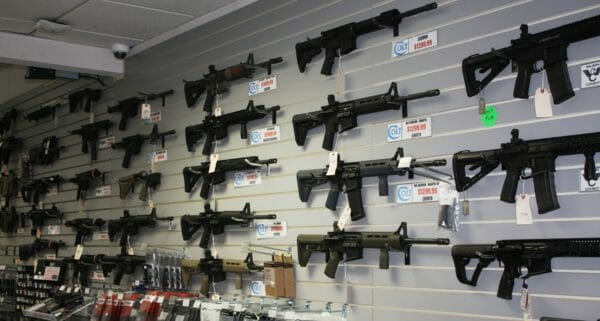 Oregon anti-gunners are mounting a new effort to restrict so-called “semiautomatic assault weapons.” (Dave Workman photo)U.S.A. –-(Ammoland.com)- Oregon’s Legislature may not convene until early next month, but already battle lines are forming over a trio of measures a faith-based gun control lobbying group is proposing that includes raising the minimum age to purchase firearms to 21 years. A group calling itself Lift Every Voice Oregon (LEVO) consists of leaders from different faiths, according to a report at KTVZ. As explained on the LEVO website, the group claims to be “advocating for safer schools, houses of worship and communities.” Back on Dec. 9, LEVO filed IP #60 with hopes of getting it on the November 2020 ballot. If adopted the measure would regulate “semiautomatic assault firearms” by requiring completion of a safety course, pass a background check and endure a five-day waiting period. A second measure would prohibit the manufacture, sale or purchase of ammunition magazines that can hold more than 10 rounds. The agenda is something of a copy of what has happened in neighboring Washington with a gun control initiative adopted in 2018 that regulates such guns, and also proposed legislation that will be under consideration by the legislature. The November election could be critical for Beaver State rights activists, because there will be at least 16 open races for spots in the Oregon Legislature, due to retirements primarily, according to the Portland Oregonian/Orgonlive.com. Vacancies are split between the state House and Senate. That may cause anti-gun Democrats to behave themselves for fear they may see their power eroded, and then again maybe not. The story said former House Majority Leader Jennifer Williamson and Senate Finance and Revenue Chair Mark Hass will vie for the office of Oregon Secretary of State. Also, Sen. Cliff Bentz (R-Ontario) is stepping down to run for Congress, the story noted. All of these things combined have compelled the Oregon Firearms Federation (OFF) to post this message on its website: “Nationally, Republicans in Congress refused to use their majority to make any meaningful reforms. And now Oregon is controlled by an even larger number of rights hating leftists. This is the time to fight even harder. Please sign up for our legislative alerts to stay informed about gun rights in Oregon.” Oregon’s gun control fight frequently gets overshadowed by what goes on north of the Columbia River in neighboring Washington State, but this year things could be different. The legislative session kicks off Feb. 3 in Salem. That’s three weeks after the Democrat-controlled legislature in Washington convenes on Jan. 13, so fireworks in the Pacific Northwest over gun rights will already be going off in Olympia, where incoming House Speaker Laurie Jinkins (D-Tacoma) has been no friend of gun owners. By no small coincidence, President Donald Trump will deliver the annual State of the Union address Feb. 4, and if he follows tradition, he will have a few words to say about protecting the Second Amendment. Under Oregon’s State Constitution, “The people shall have the right to bear arms for the defence (sic) of themselves, and the State, but the Military shall be kept in strict subordination to the civil power[.]” Almost one year ago, AmmoLand reported on an earlier initiative attempt to restrict gun ownership, and the fact that it failed didn’t stop anti-gun advocates. LEVO’s Rabbi Michael Cahana told KTVZ News, “In our faith traditions, we are told that we can't stand idly by while our neighbor bleeds. [It] means that we have to take responsibility when there is a crisis, as there is in gun violence in our country.” But wait a moment. According to the FBI Uniform Crime Report for 2018, the most recent year for which data is available, Oregon suffered 81 homicides of which 48 involved firearms. Thirty of those were committed with handguns, only three with rifles of any kind and one with a shotgun, while in 14 cases, the gun was not identified. Similar to neighboring Washington, which had a higher number of slayings in 2018, rifles of any kind account for a fraction of Oregon’s homicides, and that pattern seems consistent over the years. Yet, the gun control crowd based in Portland wants to ratchet down on semi-auto rifles. Why? Cahana’s explanation to KTVZ was pure boilerplate: “We're simply saying there are some weapons that are really weapons of war, that don't belong on our streets and in our homes.” The “weapons of war” meme has been playing to liberal Democrat audiences for the past several months, through the preliminary Democrat presidential debates. The phrase has become part of the gun control lexicon. Grassroots activists will gather Jan. 17 in Keizer at 7 p.m. for a session involving several organizations including OFF. Tickets are on sale for that event and details may be found here. Coincidentally, earlier in the day in Olympia, Washington gun rights activists will gather at the State Capitol for their annual lobbying day effort. About Dave Workman