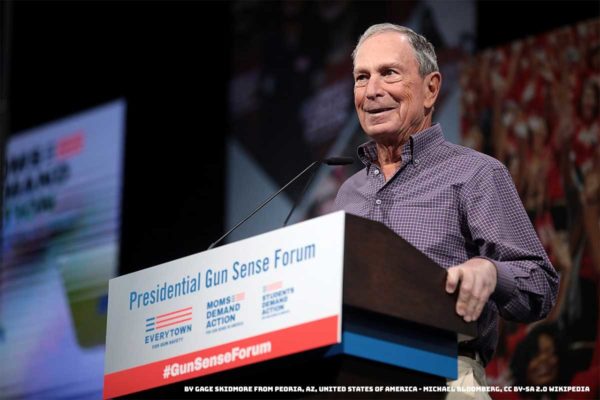 Michael Bloomberg By Gage Skidmore from Peoria, AZ, United States of America – CC BY-SA 2.0 https://commons.wikimedia.org/w/index.p ... 15[b]U.S.A.[/b] –-(Ammoland.com)- Comments by President Donald Trump and Candidate Michael Bloomberg, made shortly after the heroic actions of Jack Wilson, in the West Freeway Church of Christ, in White Settlement, Texas, show a stark difference in their attitude toward the Second Amendment and the wisdom of having the right to bear arms protected in the United States Constitution. First, the reaction of President Donald Trump, as put forward in one of his famous tweets: The tweet by President Trump is consistent with his support for the right of the individual to bear arms in defense of himself and others, as mentioned many times during his campaign. Candidate Michael Bloomberg, former Mayor of New York City, also reacted to the defensive shooting in the West Freeway Church of Christ. He did so during a public event, which was recorded and placed on YouTube.
https://www.youtube.com/embed/GXtOjFRx93k
The statement in the video is quoted below, Michael Bloomberg said: “And that may be true, I wasn't there and I don't know the facts that somebody in the congregation had their own gun and killed the person who murdered two other people, but it is the job of law enforcement to have guns and to decide when to shoot. You just do not want the average citizen carrying a gun in a crowded place.” Michael Bloomberg may not have known all of the facts at the time he answered this question. The video of the shooting has been widely available. Here is the link  For those with a slower Internet connection, here is a screenshot with labels: