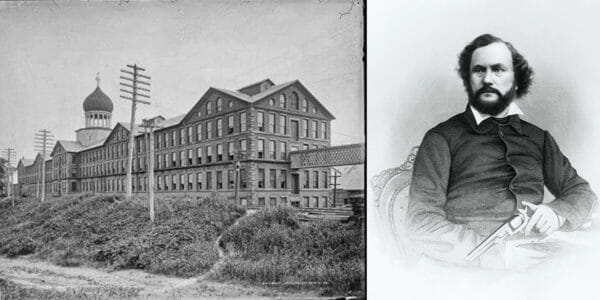 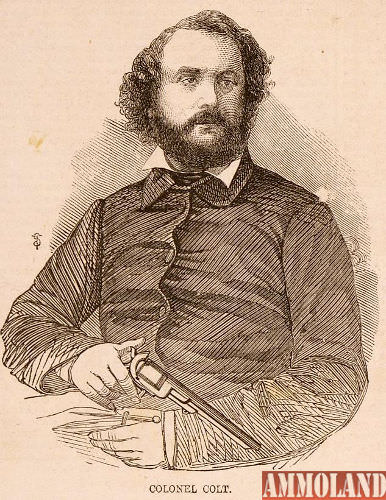 Samuel Colt, New York Journal of Commerce etching, November 29, 1856. Library of Congress. LC-USZC4-12112At his factory in Hartford, January 10 was just another day. Factory records indicate that they filled an order for 100 Colt Navy revolvers in the morning, destined for B. Kittredge & Co. in Cincinnati, Ohio. Another 50 of the same model went to New York’s Schuyler, Hartley & Graham that afternoon. There’s no mention of the date’s significance, even in the ledger’s margins. As an up-and-coming firearms inventor in the 1830s, he billed himself as “Dr. Coult of New York, London and Calcutta” while exhibiting the effects of nitrous oxide. Traveling the country as a “practiced chemist,” Colt used the nitrous demonstrations as a way to raise money for the development of his firearms. Colt was no stranger to less-than-conventional ways to make money. He spent a number of years working under the direction of the Secretary of War on new detonation technology for underwater mines. He even ran a rolling mill for sheet metal and had a factory to make nails. None of those ventures ever paid off, but Colt was undeterred. When Sam Walker of the Texas Rangers came calling in the 1840s, Colt would finally get his big break. He eventually hung up his lab coat, took down his medical degree, simplified the spelling of his name, and began making the revolvers that would make him a legend. The Walker revolver provided the capital needed to expand his line of revolvers. The 1849 Pocket, 1851 Navy, 1860 Army, and others soon followed. Much of his success was due to his embracing of the “American Method of Manufacturing,” which is a fancier way of describing what is, essentially, an assembly line. The use of interchangeable parts allowed him to produce better guns faster than ever before.

Impeccably Documented Captain Walker's C Company Colt Walker U.S. Model 1847 Revolver. Photo courtesy of Rock Island Auction Company.Even though he was quite the inventor, Colt was not without some missteps. Failure to secure the rights to Rollin White’s bored-through cylinder patent in the early 1850s prevented his factory from producing a cartridge revolver for almost 20 years. Descended from a major in the Continental Army, he sought to carry on his family’s military legacy. Commissioned as a colonel on May 16, 1861, he was set to command the 1st Regiment Colt’s Revolving Rifles of Connecticut. It never panned out and he was discharged a month later on June 20. Still, with the country embroiled in the Civil War, business was very good for Colt. Despite his exceptionally short tenure as a military man, he likely saw the commission as a legitimization of his previously-self-appointed title of colonel on many of the presentation arms he made. 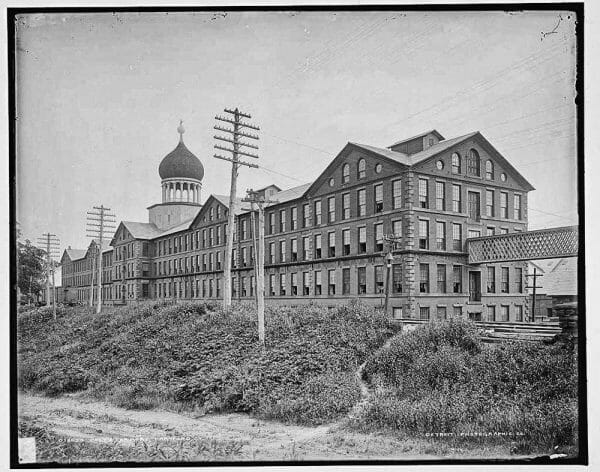 Colt's Armory, Hartford, Ct. between 1900 and 1906After his untimely demise from gout complications, the company that bore his name continued to thrive. In fact, two of the company’s most successful guns – the Single Action Army revolver and the Model 1873 lever-action rifle – debuted more than a decade after his death. Not everyone is aware of this since he died so young. That his company created the “Guns that Won the West” after he was gone is a testament to the solid footing he created for his business. When the company secured the contract to make Model 1911 pistols for the US military, Sam Colt would have been 97 years old. If, by some miracle, he had still been alive, you can rest assured that there would have been plenty of presentation-grade 1911s embellished with the words, “With Compliments of Col. Colt.” About Logan Metesh