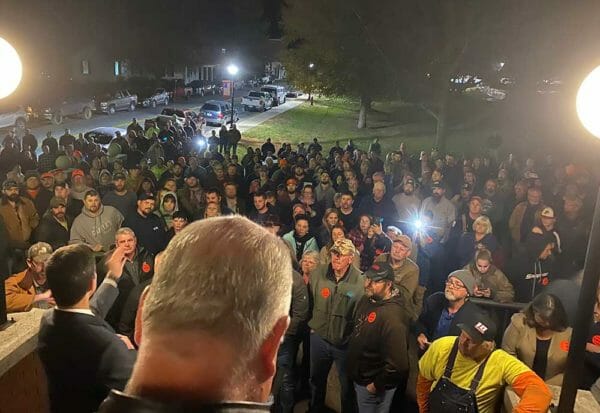 Massive Pro 2A Turnouts Continue Amelia County VirginiaVirginia – -(AmmoLand.com)- It’s no secret that Virginia Democratic officeholders dislike the Second Amendment right to keep and bear arms. As it turns out, they aren’t big fans of the First Amendment either. Last year, when Republicans controlled the legislature, Governor Northam asked for “an open and transparent debate” on his anti-gun agenda. However, as soon as he learned that his party had won control of the legislature, the time for debate seemed to be over. Rather than welcoming discussion, Governor Northam and other Virginia Democrats have attempted to quash all dissenting views, so that they may proceed unimpeded with their plan to reshape the Commonwealth in the image of places like Chicago and New York City — places where gun control has worked oh-so-well. One might have thought that after more than 120+ of Virginia’s localities passed Second Amendment Sanctuary resolutions, those in power in Richmond might be at least somewhat curious to find out what has motivated such an unprecedented level of nonpartisan grassroots opposition. On the contrary, they simply placed their hands over their ears and yelled la-la-la. Second Amendment Sanctuary resolutions represent fervent petitions to the state government, imploring the new Democratic majority not to carry through on their threats to engage in the wholesale destruction of constitutional rights. Yet in response, with a dismissive wave of the hand reminiscent of Virginia’s last royal Governor, Lord Dunmore, Virginia’s Attorney General blithely declared the Sanctuary resolutions to be of “no legal effect.” Virginia Democrats at all levels have also resisted attempts by gun owners to better understand the workings of government. Gun Owners of America recently filed more than half a dozen Freedom of Information Act requests with various officials and agencies in Virginia government, including to the Governor, Lieutenant Governor, Attorney General, the Criminal Justice Services, the Department of Health, Senators Dick Saslaw and George Barker, and outspoken anti-gun Delegate Kathy Tran. But the great majority of GOA’s FOIA requests have been ignored, in violation of the clear statutory deadline for a response.
https://www.youtube.com/embed/6Y0kzXhins0
Just days ago, state Senator David Marsden was caught on a hot mic at an appropriations hearing, mockingly referring to gun owners as “little kids” and advising other legislators: “don’t respond to them.” When that tape became public, Mardsen reportedly doubled down on his comments, claiming the next day in an email that gun-rights supporters have been “behav[ing] badly” and that many of them have “mental health issues.” Then, at another hearing, three days later, newly elected Prince William County Democratic Chairman Ann Wheeler warned at least three times that gun owners were not to verbally approve of anything being said by their compatriots. At one point, Chairman Wheeler went so far with her threats that she needed to be reined in by another supervisor, who reminded her that she had no autocratic right to control people outside the board room expressing their opinions. Apparently, Virginia’s gun-owning “deplorables” are not even fit to be in the room as our rulers vote to take away our Second Amendment rights. Rumors have even circulated that some Democratic General Assembly members might take the day off, or at least go into hiding, during VCDL’s Gun Lobby Day in Richmond on January 20, in order to avoid listening to what gun owners have to say. Key Democrats also have said they are considering banning firearms in the Capitol and on its grounds before the rally — in spite of the fact that there has never been any sort of issue in the past — again, seemingly with no motivation other than to provoke. The day before the General Assembly convened, former mayor Bloomberg appeared in Richmond with former Governor Terry McAuliffe, to praise Democrats’ recent victories. But when asked about a billboard discussing the Northam/Bloomberg gun confiscation scheme, he let the cat out of the bag, quipping that it was “the best news I’ve gotten today.” Bloomberg really does favor disarmament. Even after a good guy took out a bad guy in a Texas church recently, Bloomberg voiced his displeasure saying, “You just do not want the average citizen carrying a gun in a crowded place.” Virginia’s Democratic officials, bought and paid for by Mayor Bloomberg, have received their marching orders, and are determined to enact his radical anti-gun agenda regardless of what Virginians think, including their own constituents. In other words, they are determined to radically alter Virginia’s laws, institutions, and traditions, many of which date back nearly 400 years — with absolutely no thought to the consequences — legal, political, or otherwise. Virginia’s Democrats won last November at the “ballot box.” Now, Democratic officials are attempting to extinguish all forms of dissent, refusing to listen to Virginia’s gun owners when they take to the “soapbox.” Finally, Virginia’s governor and attorney general have claimed that counties and cities have no choice but to enforce unconstitutional gun laws, putting law-abiding Virginians in front of the “jury box.” Virginians are fast running out of “boxes” with which to preserve their most fundamental constitutional rights. 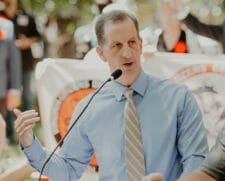