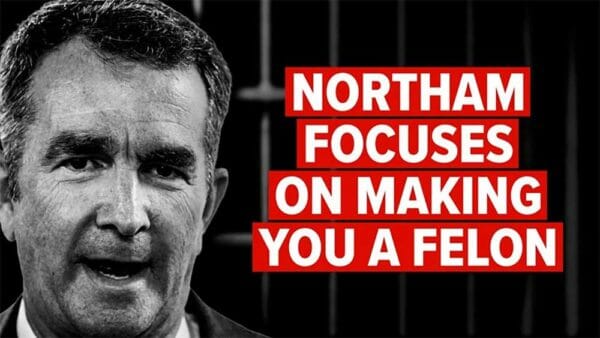 Disgraced Governor Ralph NorthamFairfax, VA – -(Ammoland.com)- Disgraced Governor Ralph Northam and his anti-gun allies in the newly elected legislature have made it clear they are hell-bent on enacting gun control. They want to take your guns and they want taxpayers to fund it. They’ve seen the same research that has shown that gun control doesn’t work. Violent crime in Virginia fell for the second consecutive year, and the Commonwealth has the fourth lowest violent crime rate in the nation – also for the second consecutive year. Virginia had the 25th largest decrease in the violent crime rate from 2017 to 2018 while holding its spot as the fourth safest state. Virginia is outpacing the nation in reducing violent crime; the national rate decreased by 3.6% while Virginia’s decreased 5%. It isn’t just overall violent crime that has decreased in Virginia. The murder rate fell by 17.3%, and firearms-related homicides specifically fell by 13.8%. For all of the Bloomberg talking points, Northam and his minions regurgitate, there were eight homicides with a rifle of any type in Virginia in 2018. There were 3.75 times more homicides with knives (30 total) than rifles of any type and about twice as many fatal assaults with hands, fists, or feet (15 total) than rifles of any type. Virginia has 14 times the population of Baltimore but 1.4% of the homicides (391 in Virginia statewide compared to 309 in the city of Baltimore). Clearly firearms aren’t the problem, and gun control doesn’t work. The robbery rate fell 17.3% in Virginia from 2017 to 2018, and there was a decrease in both the number of robberies committed with a firearm (down 7.5%) as well as the percentage of all robberies that were committed with a firearm (down 2.4%). The rate of aggravated assaults increased 0.7%, and changes in the number of aggravated assaults committed with a firearm tracked with the number of overall aggravated assaults (increases of 8.1% and 7.9%, respectively). The share of aggravated assaults that involved a firearm was steady while the percentage of assaults involving a knife or other cutting weapon increased 1.4%. There was a larger increase in the number of aggravated assaults committed with knives (9.2%). So violent crime decreased. Homicides and robberies committed with a firearm both decreased while the percentage of aggravated assaults involving a firearm held steady and the overall aggravated assault rate only marginally increased. One might think, to listen to anti-gun legislators and activists, that Virginia is some kind of apocalyptic frontier with no law, no order, and danger around every corner. The data shows that Virginia is safe, both comparatively and categorically. None of this is to suggest that any level of crime is acceptable. There is still a violent crime in Virginia, and there are still criminals to find, arrest, and prosecute. However, the best way to tackle the crime that does occur in Virginia is to focus on those who commit the crimes – not criminalizing gun ownership and lawfully owned firearms. Virginia would be best served by efforts focusing on criminals rather than bringing Bloomberg’s fantasy of criminalizing legal gun ownership to life. These efforts have been acknowledged by the Bloomberg-funded researchers at the Bloomberg School of Public Health and have had actual real-world results. Anti-gun researchers, found that so-called “universal background checks” don’t reduce crime just as we know that bans on commonly owned firearms don’t reduce crime. Focusing on actual criminals does work. Please contact Gov. Northam and let him know you oppose his unconstitutional gun control measures. You can contact Northam using the Governor's Office contact form or call his office at 804-786-2211​. Help us hold the line. Join us in Richmond on January 13th and sign up to volunteer to help us defeat Northam’s unconstitutional gun control agenda.