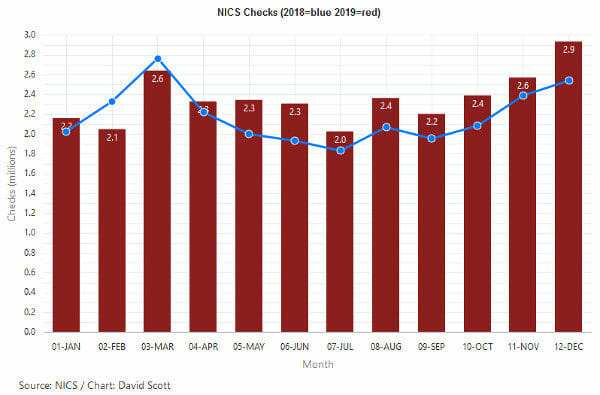 Courtesy Dean WeingartenU.S.A. –-(Ammoland.com)- The December 2019 National Instant Background Checks System (NICS) numbers were the highest month in the year, at 2,936,894 checks for the month. Those numbers lead to the highest number of checks for a year on record. 2019 saw the most background checks ever done in a single year, with 28,369,750 checks done in 2019. Increasing numbers of checks done for carry permits and permit rechecks to skew the totals from reflecting only gun sales. In December of 2019, permit checks were 343,649, and rechecks were 1,000,887. This shows the trend of rechecks becoming much more common than permit checks. The numbers for December are nearly the reverse of what they were in January of 2019. In January, the permit checks were 820,224, and the rechecks were 343,649. This is a combination of more accurate reporting and the growth of the total number of permits nationwide. In the past, many permit rechecks were recorded as permit checks in Kentucky.  Between May 2019 and July 2019, Kentucky went from over 300,000 permit checks to over 300,000 permit rechecks. This is simply an accurate recording of reality. Kentucky does a recheck on every permit every month. The growth in the number of permits nationwide, almost certainly now over 19 million, is bound to increase the number of permit rechecks. Even with a large number of permits and permit rechecks, the overall number of firearm sales appears to be up slightly over 2018. Small Arms Analytics estimates the 2019 gun sales numbers to be about 13.9 million vs 13.8 million in 2018. More and more handguns are being sold compared to long guns. It is likely the sales figures for 2020 will continue the rise shown in 2019. The Democrat candidates all seem committed to significant infringements on the right to own and carry firearms. Bans on some firearms and firearms accessories are being continually pushed in the old media. Presidential candidate, Michael Bloomberg has asserted the “average citizen” should not be allowed to carry guns in crowded places. Candidate Bloomberg has spent over $200 million in advertising in just a few weeks, nearly as much as the rest of the Democrat field combined. That spending is likely to continue. Whatever the political effect, it is likely to inform more potential gun owners of legislative efforts to restrict their options. Permit checks, permit rechecks, and firearms sales are all likely to increase in 2020, leading to another record year for checks, and a notable increase in firearm sales. Supreme Court cases could lead to an increase in permits in states where the number of permits are depressed by highly restrictive state laws. About 25% of the United States population lives in states with highly restrictive “may issue” permit laws. If the Supreme Court rules those laws are unconstitutional infringements on the right to bear arms outside of the home, it would be reasonable to see the number of permits increase to 25 million, nationwide. Estimating how high the number of permits may rise is beyond the capability of this prognosticator. National reciprocity may become law. The increase in Constitutional Carry states might dampen interest in carry permits. In the immediate future, gun sales will continue above the new base level, created by the Obama administration and fear of infringements on Second Amendment rights. About Dean Weingarten: