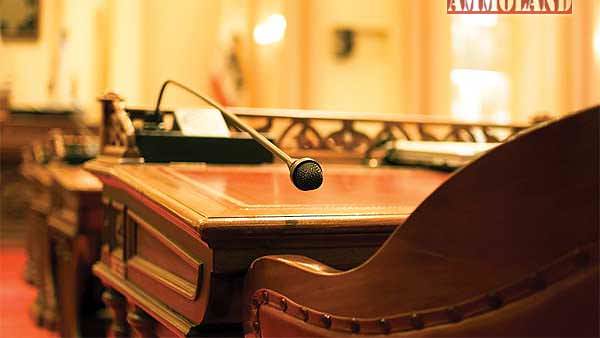 Virginia: Recap Of The Senate Judiciary Committee Meeting On Monday, January 13, 2020Virginia – -(AmmoLand.com)- Several thousand gun owners turned out at the temporary General Assembly Building on Monday, January 13th, 2020! The hearing room was divided into two areas – the larger area for gun-rights supporters and the other was a smaller area for gun-control supporters. Gun owners filled up their side of the room quickly, while the gun controllers' side was still pretty empty. To make it looked like they had more people and not look so pitiful, a search for gun-controllers in the waiting line outside the meeting room doors was conducted. Countless gun owners in the line were skipped over in the search for more gun-controllers. Whenever a gun controller was found, they were allowed to go into the meeting room, but no more gun owners were allowed in. Sheriff Scott Jenkins of Culpeper County and Sheriff Richard Vaughn of Grayson County were in the room in support of gun owners. Sheriff Jenkins spoke twice during the hearings. The meeting was chaired by Democrat Senator John Edwards. The Republicans on the committee pointed out multiple mistakes and even rules that were broken in the running of the committee, but the Democrat-controlled committee ignored the complaints and lurched forward anyhow, rules be damned. Republican Senator Bill Stanley, who could not be at the hearing due to a trial he had to attend, had been promised by John Edwards that no gun bills would be heard on Monday, but Senator Edwards went back on his word and gun bills were heard anyhow. Senator Mark Obenshain brought up that broken promise, but to no avail. Each side was only given 5 minutes total to speak on each bill. The first gun-control bill to pass out of committee was SB 69, a one-handgun a month bill, which reinstated the last version of that law before it was repealed. Senator Saslaw's version of that same bill, SB 22, was rolled into SB 69 and SB 69 was passed out by a partisan vote of 9 to 5. Republican senators Mark Obenshain and Ryan McDougle put up strong resistance, as did speakers who pointed out that the law had been a failure but to no avail. Next up was SB 70, a Universal Background Check Bill. Saslaw's version of the same bill, SB 12, was rolled into SB 70. A substitute bill was then offered for SB 70, which made the background checks only apply to sales of guns and not transfers, which fixes the problems with letting a friend or family member use one of your guns without you being constantly present. However, it still strips an 18, 19, or 20 years old from being able to own a handgun, since a dealer cannot process a handgun purchased by federal law for someone that age. Also, a background check would have to be run on all sales, even sales to immediate family members, friends, etc.! SB 70 passed by a partisan vote of 9 to 5. Senator Barker's Red Flag Law bill, SB 240, was eviscerated, as all the flaws and dangers of that bill were brought up by Republicans Obenshain, McDougle, and Chafin on the committee, as well as by the pro-gun speakers. None of the concerns were addressed and the bill was passed by a partisan vote of 9 to 5. Finally, SB 615, SB 450, and SB 505, all of which allow localities to pass various gun-control ordinances, were rolled into a substitute version of SB 35, making SB 35 an omnibus bill that destroys preemption by allowing Virginia localities to create a confusing set of local gun-control laws. Again, speaker after speaker spoke against SB 35, but it passed by a partisan 9 to 5 vote. The gun-control bills that passed out of the committee will now head to the Senate Floor to be voted on in a few days. VCDL will have an action item shortly to bombard Senators with calls and emails encouraging them to oppose the four bills. Elections have consequences and we are in a real fight to protect our rights.