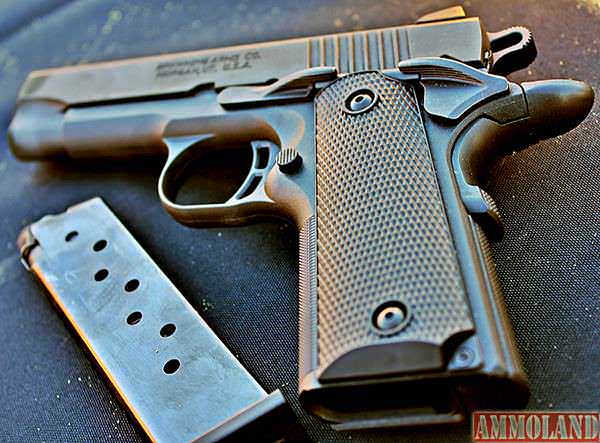 Browning 1911-.380 Black Label ProFt Collins, CO –-(Ammoland.com)- “You may delay, but time will not” ~ Benjamin Franklin Many autoloading pistols of the early 1900s were not compatible with the “high,” two-handed grip that is currently popular with American shooters. “Hammer-bite” is thus to be expected when one shoots most of this generation of pistols via a high grip. As my esteemed colleague, Tom Givens, correctly points-out, on most of these pistols, both rear and front sights were tiny, extremely hard to see, and little more than an after-thought. Also, many of these same pistols were not designed to be carried with a round chambered. Designers, manufacturers, and military trainers mostly assumed (until relatively recently) these pistols would be routinely carried with the chamber empty. Hence, “drop-safety” was not a particular concern. In America, autoloading pistols were uncommon in domestic policing until the 1970s. Until then, most American police carried revolvers. 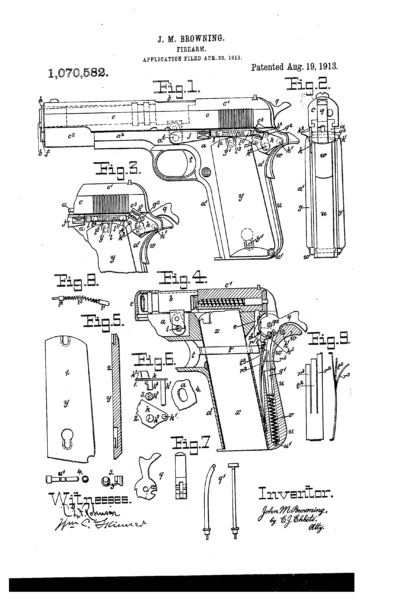 Browning's 1913-dated patent for M1911 improvements. (US Patent Office)Routine concealed-carry by non-police was uncommon in America until the 1980s. That trend continues to expand. When autoloading pistols gained traction among American police officers and concealed-carriers, there was much debate in early stages about carry status. However, the “empty-chamber” argument quickly fell into disrepute, so designers, manufacturers, trainers, and holster-makers all started generally assuming these pistols would be routinely carried fully loaded, with a round in the chamber. Manual safeties eventually went by the wayside, as did manual decocking levers/buttons, external hammers, steel frames, butt-release magazines, tiny sights The cherished Browning 1911 Pistol, while it still enjoys an ardent following, today represents a small and diminishing, minority. Striker-fired, polymer-framed, trigger-cocking service pistols, that are light, slick, easily maintained, easily-serviced, mechanically drop-safe, reliable, durable, high-grip-friendly, and feature high-tech coatings, as well as sights that are easy to see and use, now rule the serious pistol market in America, and the balance of Western Civilization. Well known manufacturers, Glock, SIG, S&W, SA, Kahr, Ruger, Beretta, FN, Walther, H&K, now have to share this market with Canik, CZ, Honor Defense, Kimber, Mossberg, et al. The 2020 SHOT Show is next week in Las Vegas, NV, and I’ll be interested to see the way these manufacturers continue to advance our Art. I’ll be reporting back, as is my habit. Will ponderous, clumsy, clunky, user-hostile, complicated pistols with tiny sights and superfluous controls be making a comeback? Not likely! /John

About John Farnam & Defense Training International, Inc As a defensive weapons and tactics instructor John Farnam will urge you, based on your own beliefs, to make up your mind in advance as to what you would do when faced with an imminent lethal threat. You should, of course, also decide what preparations you should make in advance if any. Defense Training International wants to make sure that their students fully understand the physical, legal, psychological, and societal consequences of their actions or in-actions. It is our duty to make you aware of certain unpleasant physical realities intrinsic to the Planet Earth. Mr. Farnam is happy to be your counselor and advisor. Visit: www.defense-training.com