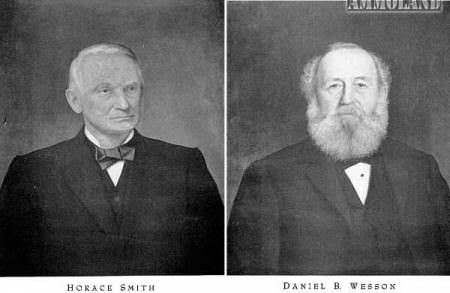 Horace Smith and Daniel WessonU.S.A. –-(Ammoland.com)-  On January 15, 1893, Horace Smith passed away at the age of 84. He retired 20 years earlier in 1873, having spent most of his life in the arms industry. By the time he became best known as the first half of Smith & Wesson’s namesake, he had already worked a total of 28 years for a number of big names: Springfield Armory, Eli Whitney, Allen & Thurber, and Robbins & Lawrence, just to name a few. 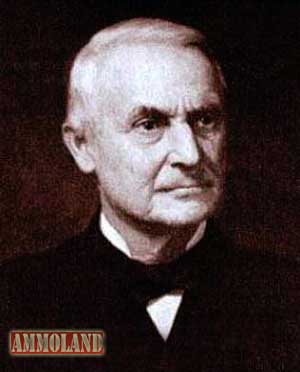 Horace SmithWhen he was just 16, Horace began as an apprentice at Springfield Armory. Among his first tasks were acting as the assistant to a bayonet forger. After four years, he became a journeyman and worked in a variety of armory departments. He excelled at inventing gun-making machinery and is credited for creating the machine for checkering hammers. After 18 years of working for the government, he moved from Massachusetts to Connecticut, where he was a toolmaker for Eli Whitney. This was short-lived, and he moved on to Allen & Thurber in just over a year. While working for the pepperbox pistol company, he began making his own arms, namely whaling guns and barrels and an exploding bullet to be used with them. The years 1850 to 1852 are a little hazy, but we know it was during this time that he met D. B. Wesson and also continued working on designs for repeating arms. The earliest example of his involvement is with a magazine-loaded pistol invented by a couple of other men and manufactured by Horace in 1850. During this same time period, he was hired to work on improvements to the lever-action rifle invented by Walter Hunt and Lewis Jennings. Wesson knew of the rifle, too, and the two men presumably bonded over the design, its shortcomings, and their thoughts for improving it. In 1852, they formed their first of two partnerships and began producing what we recognize today as the Volcanic line of repeaters. Financial issues in late 1854 led to the partnership’s dissolution, but the two titans wouldn’t be apart for long. On November 18, 1856, a factory ledger notes the reformation of a Smith and Wesson partnership. Wesson contributed $2,003.63 and Smith put in $1,646.68 – and just like that, they were off and running. They paid Rollin White $497 as a licensing fee for his patent on the bored-through cylinder, with an additional royalty of 25 cents per gun. All told, it cost $4,147.31 (including White’s fee) for the two men to start a company that would go on to become a household name in the firearms business. Adjusted for inflation, that’s approximately $122,600 in 2020 money. That initial startup cost paid off handsomely. By October 1865 – just shy of nine years later – both Horace and D. B. cleared $163,000 in annual personal income. They were the only two residents in Springfield, Massachusetts, with six-figure incomes. Smith was 17 years older than Wesson, so when he sold his interest in the company to D. B. on July 1, 1873, at the age of 65, he was ready to retire. The almost-48-year-old Wesson was still in his prime, and it was under his tutelage that the company would grow even more than it had with Smith. In retirement, Horace Smith traveled to see the western frontier, became a student of astronomy, and devoted time and money to his church and the youth in his community. After passing away on January 15, 1893, he was laid to rest in the Smith family plot in Springfield, Massachusetts. His individual headstone in the plot is very simple, giving no indication of his tremendous impact on the arms community. About Logan Metesh