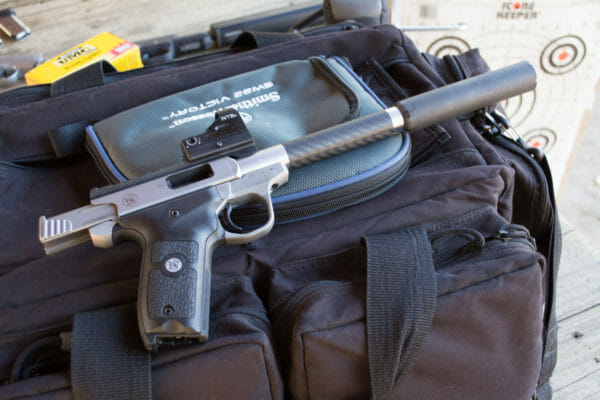 There's not much more fun than a .22 setup like this Smith & Wesson Victory with some customized gear like a Volquartsen barrel and SilencerCo Sparrow suppressor.U.S.A. –-(Ammoland.com)- So, it’s halfway through the first month of 2020 and most of us have already failed at maintaining those New Year’s resolutions. I know I’ve already given up Tactical Prancersize. Not that it doesn’t have potential, I just need to spend more time watering my plants… There are some resolutions I’m going to keep, but only because they’re fun and things I actually want to do. No one said that resolutions can’t be leisure activities. Shoot less accurately I want to miss more in 2020. Not by a lot; just a little. At least for defensive practice, if I’m knocking the bullseye out of targets all the time, I’m too close, taking too much time between the pre-sight picture and shot, or shooting too slow in rapid-fire. 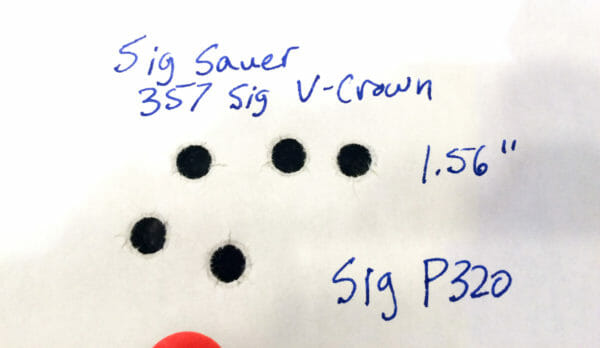 This type of thing is satisfying, but not very helpful for defensive shooting practice.Don’t get me wrong, precisely accurate shooting is a great way to develop basic skills like grip, breathing, and trigger control. I just want to work on my defensive, and dare I say “tactical” skills. The way to do that is to push the envelope a bit. For example, if I start getting perfect scores on the Dot Torture drill at three yards, I’ll move all future iterations to five. Then seven. Then 10. If I can hit a four-inch circle at 15 yards from concealment every single time in some number of seconds, I’ll speed up until my group expands. When it shrinks back to four inches at my faster time, I’ll speed up again. You get the idea. Sometimes it’s good to push yourself just past the point of failure to get better. As with weightlifting and dealing with internet trolls, you have to endure some pain, damage, and butthurt to become stronger. Put my left hand to work OK, stop… That’s not what I mean. Since I’ve been training with the new Mantis X10, I’ve been focusing on better controlling recoil. The Mantis sensor and companion smartphone software show you in minute detail the precise movements of your gun after you fire. It’ll show the degree of muzzle rise, any side-to-side movement, and the time to return to target for the next shot. It shows you far more than the human eye can detect in real-time. What’s particularly nifty is that you can fire a shot, look at the results, make an adjustment, and try again. I’ve been experimenting with different amounts of grip pressure for both firing and support hand and getting great results. With the immediate feedback, I’ve made big improvements by putting about 60% of overall grip pressure on the pistol with my support (left) hand. That’s something I want to continue, so I’ll be working on that this coming year with the help of the Mantis X10. 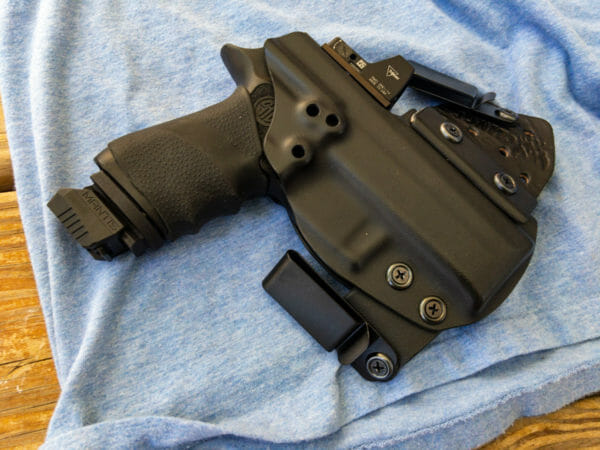 The new Mantis X10 helps you perfect things like recoil management and holster draws. I plan to take it on every range trip in 2020.Shoot more 22s Is there anything purer to the sport of shooting than a good rimfire handgun or rifle? While great for beginners, there’s no reason at all that the .22 shouldn’t be a gun for grizzled shooting veterans too. They’re insanely fun and cheap to shoot all day long, even with the “new” pricing of .22 ammunition. For all of you waiting to buy .22 ammo until the price comes back to “normal,” get over it. We’re at the new normal. Movie tickets aren’t $.25 anymore either. As if the fun and cost-effectiveness aren’t enough reason to enjoy rimfire madness, they’re great for skill development too. Whether curing a flinch developed from shooting big caliber hand cannons or working on perfecting trigger press technique, the .22 is the way to go. With no flash, bang, or recoil, you can focus on the motions without distraction. 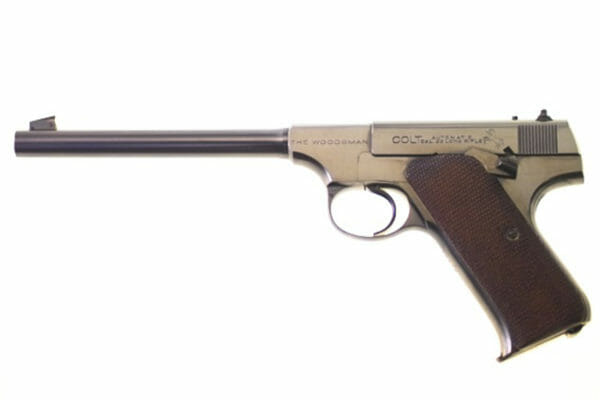 Sorry, I'm never, ever selling this family heirloom. But I will shoot it more in 2020.This year I vow to spend a lot more time with my favorites: The basic Ruger 10/22. I added the Aperture Sights from Tech Sights. Sometime this year I’ll likely start working on upgrading this rifle, likely starting with a bull barrel. The Smith & Wesson Victory. I have this one geared up already with a C-More RTS2 Red Dot Sight and a Volquartsen fluted barrel with a forward blow compensator. Colt Woodsman. This is a special pistol handed down by my grandfather. It’s a Series 1 Woodsman manufactured in 1936. I’d eat a box of .22 short ammo if that pistol had 50 rounds through it when it came into my hands almost 20 years ago. Yes, it’s special and no, I’m not selling it. Ever. Practice more with pistol optics It’s time to banish the gun counter aphorisms like, “What are you going to do when the battery dies?” and “You know, it takes 14 minutes just to find the dot. That’ll get you killed on the street.” Remember, Ben Cartwright and all the real cowboys said similar things when some guy in a suit and bowtie told them it was time to put glass scopes on their trusted rifles. “Glass??? Heresy!!! Those will break before you even take them out of the box! How do you think Custer lost that battle?” The time for pistol optics is here. Competitors have been using them for years and gear has evolved to the point where it’s durable and some better products run for years on a single battery change. As for speed, the same argument applied to brass bead sights ramp sights and magnified scopes. If you want more precision, choose a red dot variant with a tiny and dimmer dot reticle. If you want speed, choose a model optimized for that. Getting used to red dots on a defensive gun takes some practice. Then again so does everything else related to shooting guns. I worked with Red Dots a lot in 2019 and got comfortable with them. With the right equipment choices, my speed is now acceptable too. Better yet, precision at any distance over 10 yards is significantly better. As I write this, I’m gearing up for the annual Shooting, Hunting, and Outdoors Trade (SHOT) show and I already know several pistol manufacturers are releasing a slew of red dot options. Not that there aren’t plenty out there already. The red dot revolution is coming and before too long, some form of one will be considered “standard.” Reloading for fun and relaxation I’m an avid reloader, but I’ve been so darn busy in 2019 that my production has fallen faster than CNN’s ratings during the impeachment process. I think rather than focusing on volume reloading for pistol and rifle plinking, I’m going to use my limited time to make specialty ammo. 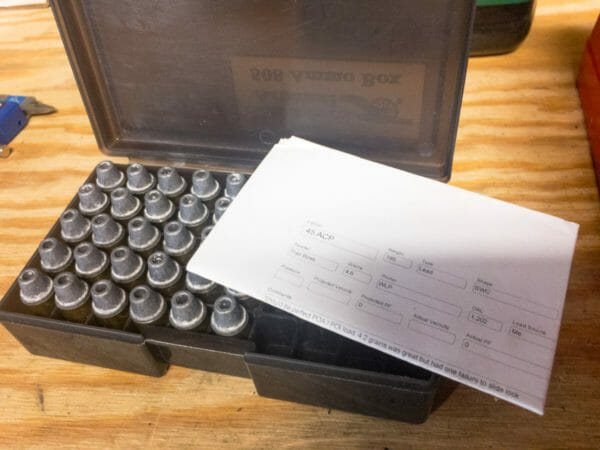 One reloading project that's particularly fun is making pussycat .45 ACP loads with Trail Boss powder.I love tinkering with rifle reloads to find that perfect accuracy performer for each rifle in the safe. That’s an area where you can “beat” manufactured ammunition. Not because I’m better at reloading than the big ammo companies, but because I have the luxury of creating a specific cartridge sized and optimized for my rifle only. The companies have to ensure their ammo works in all rifles of a given caliber, so they can’t make ammo quite as “tight” as an individual can. It’s also fun to create interesting pistol and revolver loads. A favorite is low-for-caliber pressure and recoil ammunition. It’s great for practice as you can focus on fundamentals with less bang. It’s also great for exposing new shooters to larger calibers gradually. Start them with a .22, then hand them a reduced power 9mm or .38 Special. It’s a great confidence builder. So, what say you? What’s on your list for 2020? About Tom McHale is the author of the Practical Guides book series that guides new and experienced shooters alike in a fun, approachable, and practical way. His books are available in print and eBook format on Amazon. You can also find him on Facebook, Twitter, Instagram and Pinterest.