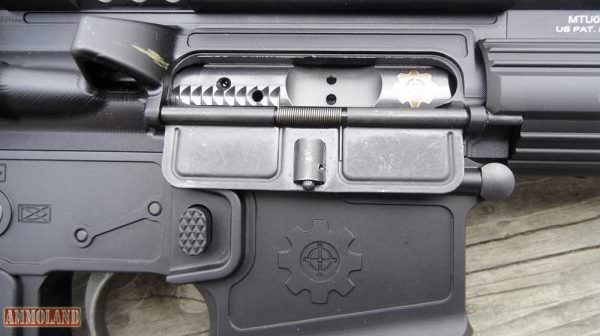 Next Level Armament NLX 556 GFK Rifle Dust Cover DoorFt Collins, CO –-(Ammoland.com)- “Cleanliness and order are not matters of ‘instinct.’ They are matters of education, and like most great things, you must cultivate a taste for them.” ~ Benjamin Disraeli Many mistakenly believe that spring-loaded “dust-covers,” designed to obturate ejection ports on military rifles, were an invention of Gene Stoner, as none appeared on the previous two generations of US Rifles. Not hardly! Since the appearance of autoloading military rifles (over one hundred years ago), both weapons designers and war planners have been painfully aware that critical advantages autoloading rifles and machineguns render to an army will be quickly nullified when these weapons suddenly decide not to run! Muddy/dusty WWI battlefields bitterly demonstrated the necessity of keeping receivers of autoloading weapons sealed as much of the time as possible! In fact, most infantry rifles of both World Wars were issued with canvas wrappers designed to go around the action and protect it from mud and dust until it was deployed. Mud, dust, grit, and sand, when they get on the inside of receivers and come into contact with internal, moving parts, will dependably shut-down the best-designed weapons in the world, as so many have unhappily discovered, often at an inconvenient moment! Oliver Winchester decided to put a sliding dust-cover on his lever-gun of 1873. Kijiro Nambu put dust covers on his venerable Type 92, 96, and 99 machineguns. On these weapons, entry-points for mud and debris are just about all sealed. Nambu knew and understood how important is was in warfare to keep the internals of weapons-free from contamination. Louis Stange put dust-covers over every orifice of his famous, but ill-fated, FG42. So, Stoner was in good company! In fact, dust-covers, some very sophisticated, appeared on autoloading rifles and machineguns just as soon as they started to be designed and built (the early 1900s). Dust-covers were found not just over ejection ports, but over magazine wells, and machinegun belt entry and exit ports as well. With the invention of smokeless propellants and the subsequent appearance of box magazines, belt-fed machineguns, and spitzer bullets as the Twentieth Century dawned, sights on this generation of military rifles and machineguns were often calibrated all the way out to 2000m! War planners of the era, fascinated with the potential of their new weapons understandably assumed warfare would now take place at long ranges and would thus be much “cleaner” than during the black-powder era. WWI amply demonstrated they couldn’t have been more wrong! Warfare was every bit as dirty, virulent, personal, savage, close, and deadly as it had ever been! Accordingly, keeping receivers of sophisticated weapons sealed and thus protected from invasion of contaminants, as much of the time as possible, has greatly concerned weapons designers, trainers, and Operators ever since! In “mud tests,” where military rifles are immersed in mud, and then an attempt is made to fire them, few survive! All that have substantial, unsealed entry points (like the M14), fail this test! Weapons with sealed receivers (like the M4), do much better! The M14 (M1A), M1, M1 Carbine, and a host of others are still very good weapons and enjoy my recommendation, yet they share this vulnerability. The POF (Patriot Ordinance Factory) Revolution Rifle (H&K 91, G3), RA/XCR, FAL, Kalashnikov, SCAR do much better. The AR System, (M4, PTR Revolution, etc), so long as the dust-cover remains closed, do best of all! In conclusion: The rifle you keep for serious purposes should be sealed within a case when stored at home and when traveling. Protect it from dust, grit, and other contaminants as much of the time as practicable. When the rifle is in a higher state of readiness and thus “out,” such as when it resides by your bedside or you’re actually carrying it, keep the dust-cover closed (when the weapon has one), and keep a magazine fully inserted into the magazine-well. Keep the ejection port and the magazine-well sealed all of the time! Even rifles sealed in cases should have dust-covers closed and magazines inserted! It is our honor and favor in this generation to enjoy and exercise our right to keep and bear these sophisticated weapons, and thus continue to breathe the blessed air of freedom! Most are extremely tolerant of chronic neglect and poor maintenance and will serve you well in any event, but there is a limit, as we see! “Grass-eaters are easily identified and selected for their chosen status of victimhood. On the other side of the ledger, we Operators have audaciously claimed our own image and likeness to our Creator. Being barely alive, but on your own terms, is better by far than living a bloated half-life on someone else's” ~ Anon /John

About John Farnam & Defense Training International, Inc
As a defensive weapons and tactics instructor John Farnam will urge you, based on your own beliefs, to make up your mind in advance as to what you would do when faced with an imminent lethal threat. You should, of course, also decide what preparations you should make in advance if any. Defense Training International wants to make sure that their students fully understand the physical, legal, psychological, and societal consequences of their actions or in-actions. It is our duty to make you aware of certain unpleasant physical realities intrinsic to the Planet Earth. Mr. Farnam is happy to be your counselor and advisor. Visit: www.defense-training.com