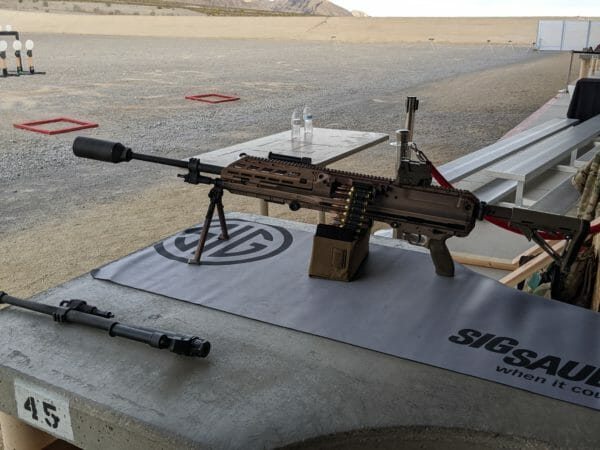 SIG SAUER MG 338U.S.A. –-(Ammoland.com)- It’s late January again, so all of our social media channels are clogged with news, photos and “celebrities” from around SHOT Show. While many companies have wisely chosen to split forces and send some personnel to support the Freedom-loving folk protesting in Virginia, fiscal realities dictate a presence at the largest gun industry in America is still necessary for so many people.  So with one eye on the events out east, I spent yesterday at the Clark County range facility with Sig Sauer and representatives from around the industry.  Today is the SHOT Show industry day at the range.  Now that I’m back at the hotel digesting my notes, here’s what I’ve been seeing and thinking. Glock 44 When the Glock 44 (.22 lr) was announced, it didn’t seem to be a big PR hit, even though people have been asking for a .22 lr Glock for years.  I didn’t think a whole lot about it, because in all honesty I don’t enjoy most .22 lr handguns.  They’re finicky unless you run the magical unicorn ammo yours prefers and have little training value.  They’re fun though, and cheap. I underestimated the Glock 44 until I shot it.  First, it feels more robust than any other .22 lr handgun I’ve fired.  Second, it had more recoil than a .22 normally does, and that’s a good thing.  Here’s why: The Glock 44 will excel as a trainer.  I can go to the range and shoot all day for cheap with this.  I can use the same draw, same holster, same mechanics, same sights.  I can work on muscle memory for a hundred reps before switching over to one of my centerfire Glocks and polishing off work with one box of JHP’s.  It will still work as a target plinker as well.  The increase in recoil above a P-22 or Ruger MK III Isn’t that much, it’s just enough to make you feel like you’re shooting an actual firearm, not an air soft gun.  It’s still plenty gentle to head out and teach your kids how to knock off pop cans. I didn’t want one, but now I need one.  That’s far from writers hyperbole, that’s what I’m gonna head out and spend my paycheck on. 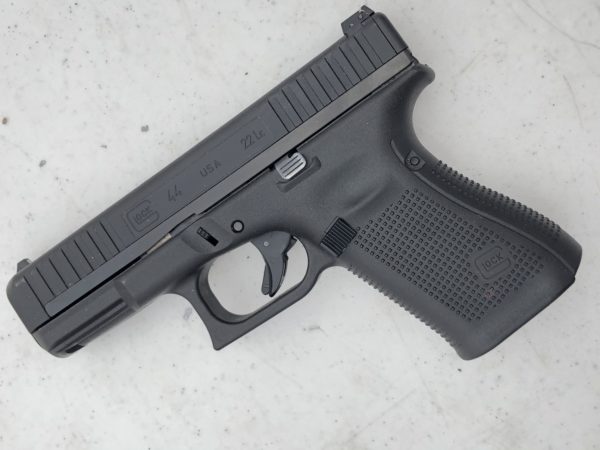 GLOCK 44SIG SAUER's Handguns I don’t have a lot of experience with Sig Sauer’s handgun lineup.  I’ve shot a couple models on a couple of occasions, but I’ve not had the time to sit and examine them for a long time (and put a reasonable number of rounds through them) until yesterday’s Sig range day.  The two I spent the most time with were the P365 SAS (Sig Anti Snag, not the other SAS) and the M17/M18. The P365 was enjoyable to shoot, giving me further evidence the recent trend of smaller/slimmer/shorter carry guns can still be effective (see Glock 42 way below for a counterpoint).  The fiber optic sight that’s inserted flush with the top of the slide (photo below) would take some getting used to for sure, but could be effective for those who think normal height sights are too snag prone (I don’t know anyone concerned about that.  Undercover cops?).  I didn’t like the hyper-recessed slide catch/release, which is really only functional for manual slide lock back.  Some argue the merits of never releasing the slide via the catch anyhow, and those folks will find here a gun made to that preference. 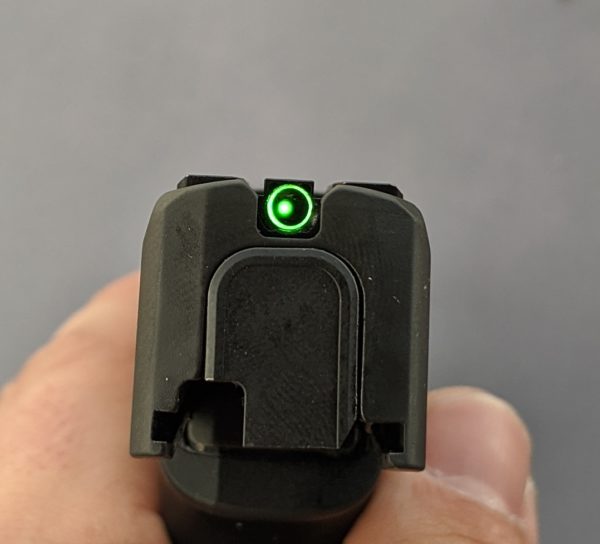 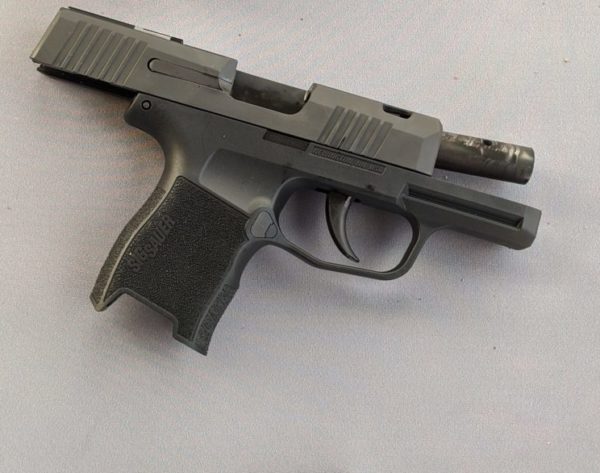 SIG P365
https://www.youtube.com/embed/fqxYgRyo5g0
The M17/M18’s were guns I had an admitted nasty pre-disposition towards.  Being an Airborne Ranger combat vet, I’m pissy about the Armed Services adopting weapons that aren’t top rate.  After the “drop-fire” fiasco (and the M9 slide break fiasco), I was a bit up in arms (pun very much intended) about Sig’s failure to present a top of the line handgun to our troops.  That’s fixed now, and any lingering anger over the issue is counter productive to answering the question “How is the gun now?”. Ten minutes and a handful of mags is far from a torture test or even a thorough review.  It did give me time to gauge whether I could drop rounds where I wanted (I could) and whether there were any glaring issues.  Happily, there were not.  The ergonomics were just fine, with a good grip and controls placed within reach of the average hand.  That’s really what a military handgun has to be, a one-size-fits-all gun that’s really a final option for most.  The gun didn’t shock or amaze me, but it did leave me feeling that the gun (as it now is), is a solid option. 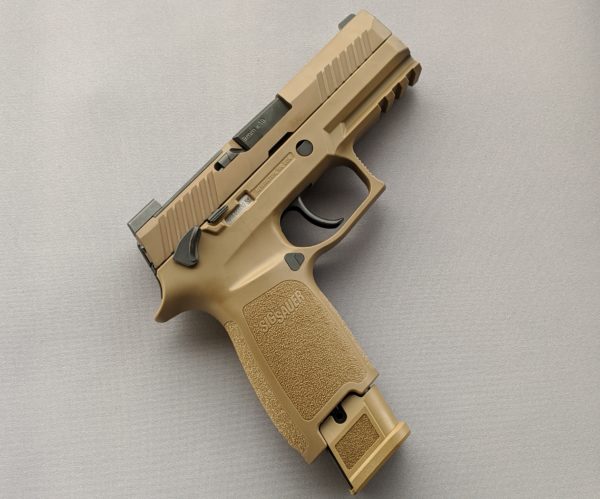 SIG M17Sig Sauer MG 338 Yeah buddy, I was looking forward to this like a feral Velociraptor in heat.  My first job in 2nd Ranger Battalion was in a 240 gun team.  Getting a chance to shoot it (after a technical briefing by another former Ranger turned Sig expert) was exciting, even if it was only a tiny little 7-round belt. Short-stroke piston operated, air-cooled, adjustable gas, suppressed, folding stock, belted .338 Norma Magnum general-purpose machine gun of doom should be the official description.  Thanks to some interesting design features (reciprocating barrel), the MG 338 has less recoil than the venerable M240B, despite being chambered in the larger .338 NM, as well as being lighter at 21 lbs.
https://www.youtube.com/embed/OA-Pqt6u7zA
Glock 42 This little .380 isn’t exactly new, but this was my first time shooting it.  I understand the idea.  Done right, the idea is awesome.  Even using the anemic .380 can be mitigated by the right ammo (hello, Norma).  Not enough grip for me,  Not by a finger-and-a-half.  Fine if you have Barbie hands. Diamondback Firearms DBX 5.7 I’ve heard 2020 dubbed “the year of the 5.7” as multiple companies are dropping new products revolving around this boutique cartridge.  More guns however, means more ammo options as buyers accumulate.  The first I’ve seen so far was Diamondback Firearms’ neat little DBX.  This little gun is sub-4 lbs, with an 8” barrel and an (optional) brace.  The mags are compatible with FN FiveSeven magazines, though we used Pro-Mag products to shoot with.  This is kind of the “anti .300 Blk”, slinging a lighter, faster bullet instead of having (also optional) 220 gr subsonic rounds.  This was a fun little gun to shoot.  No price yet. 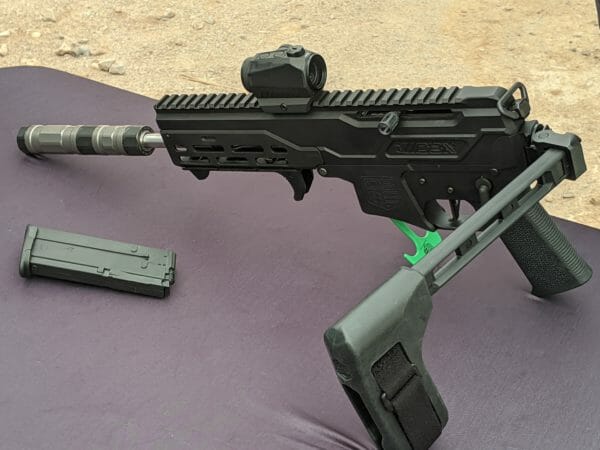 Diamondback Firearms DBX 5.7That’s it for the moment, just a quick update and a couple of thoughts.  Check in on Instagram @Ammoland and @Rexnanorum for live updates! About Rex Nanorum