RETAY ARMS to debut all new 20ga chambered Masai Mara shotgunUSA – -(AmmoLand.com)- The long-awaited 20ga version of RETAY’s popular Masai Mara semi-automatic inertia shotgun is set to be available in the United States in early 2020 Easton Maryland, December 24, 2019 – RETAY ARMS LTD. STI. of Konya Turkey announces that it will display the latest incarnation of its wildly successful Masai Mara Shotgun at the 2020 SHOT SHOW In Las Vegas NV. Customers have been asking and RETAY has answered with the all-new Masai Mara 20ga. The 20ga Masai Mara will be a fully-featured scaled down clone of the of its 12ga siblings. The 20ga Masai Mara will be available in both walnut and synthetic models including SP waterfowl configurations. The small frame Masai Mara 20ga will offer unprecedented lightweight coupled with the excellent performance and balance that has made the 12ga version one of the most sought after shotguns in the US market today. RETAY’s popular Masai Mara shotgun line up are designed to be lightweight high-performance semi-automatics with a stock-based inertia powered action, based on the original design by Bruno Civolani. All Masai Mara’s including the new 20ga will feature RETAY’s patented “Inertia Plus ™” floating bolt system.
https://www.youtube.com/embed/cbVn9nEnygk
Inertia Plus ™ is the world's most advanced and refined kinetic energy driven rotating shotgun bolt design. The Retay “Inertia Plus System™” effectively eliminates misfires that have plagued inertia shotguns until now. The system uses an ingenious active torsion mechanism inside the bolt carrier body to apply added rotational force to the bolt head. The system essentially forces the bolt head to rotate into lock up with the breach, even when conditions are less than ideal. At the same time, the “Inertia Plus System™” prevents unintended disengagement of the bolt head from the breach. If disengagement is caused by sudden jarring of the firearm or accidentally snagging the bolt on a branch while in the field, the “Inertia Plus System™” corrects itself, automatically returning the bolt to full lock up with the battery. The firearm remains ready for action and ready to fire without any intervention on the part of the operator. The Inertia Plus System has been called “the first affordable, obvious, and substantial improvement to the Bruno Civolani action in 50 years” Until now, the Masai Mara line had been available only chambered for 12ga in both a 2 ¾” – 3” and 12ga 3.5” versions. Beginning this Spring, hunters and shooters across the United States will have the option of purchasing a fully-featured 20ga with a scaled-down 2 – ¾ to 3” chambered version as well. The familiar flowing lines of the 20ga chambered Masai Mara make it a visually smaller-scaled clone of its larger 12ga siblings. Like its larger 12ga siblings, it will be packed with all the same features Masai Mara shooters have come to know and love like the quick removable trigger group, easy unload and removable ejector. All these features will be packed into a package that has been scaled down. From recovered to the stock and forend every aspect of the Masai Mara 20ga has been reduced in size to make it more nimble in the hands and lighter weight to carry. The new Masai Mara 20ga will be available in all the same finishes offered in the 12ga 3” version including Walnut models with polished barrels and an array of receiver coatings, including Cerakote and color anodizing. Synthetic stocked models will be offered in matte black and popular camouflage patterns including Max-5 and Timber patterns from RealTree and the New Bottomland pattern from MossyOak. 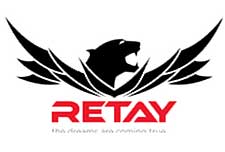 Retay is currently taking pre-orders from dealers on the 20ga Masai Mara and expects to begin shipping the guns by Mid February 2020. Initially, the 20ga will be available with 26” and 28” barrels, however, special editions including a 20ga version of the popular “Turkey XT” configuration and a youth configuration will be forthcoming in the future. The Masai Mara 20ga models will priced the same as their 12ga 3” counterparts with MSRPs ranging from $1099 – $1299 based on options. Learn more at www.retayusa.com Questions and Inquiries should be directed to Retay US Operations ℅ [email protected] Website: www.retayusa.com