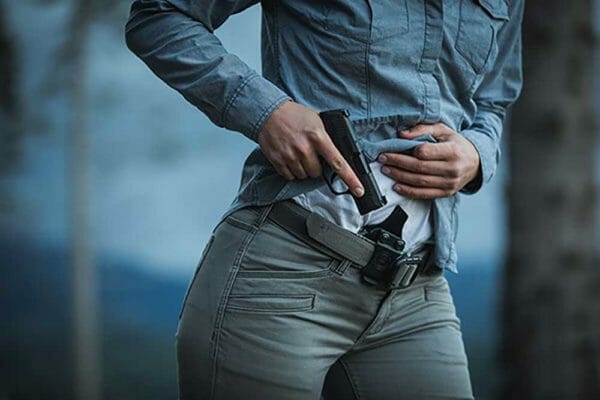 At the Bank, at Work, and as You Stop for Gas- More Self Defense Gun StoriesU.S.A.– (Ammoland.com)- You didn't see this news covered by the mainstream media, but again this week, responsible gun owners defended themselves and the people they love. Self-defense instructor Elizabeth Hautman joins the Self Defense Gun Stories Podcast to look at four new examples. Were these gun owners lucky, or were they well trained? (21-minute audio) These victims saved lives because they had a gun..and good habits. http://traffic.libsyn.com/dgustories/sdgs180.mp3First story-  Are you armed at work?   You’re behind the counter at a convenience store. It is after dark and you’re getting ready to close. Two young men run into the store through the front door. They are wearing black sweatshirts. They have the hoods pulled over their heads and masks pulled over their faces. They have guns pointed at you. This is called a clue. You’re armed. You present your gun and have it pointed at the end of the aisle. The two robbers see your gun and they turn and run. You holster your firearm and call the police. You show the police the store security video of the two young men. Note – No shots fired Second Story-  Are you armed on the street? You’re walking down the residential street after dark. Three men come out of the darkness, and they move toward you. One of them pulls a gun from his pocket and points the gun at you. They demand your valuables. You’re armed. You shoot your armed attacker. Before you can shoot your other attackers, all three of them run away. You call the police. The police find your attacker at the hospital seeking treatment. Third story- Are you armed when you’re driving? You park your car and lock it. As you get out of your car, a truck pulls in behind you. A man jumps out of the truck and tells you to hand over your keys. The robber has a gun in his hands. You hand him your keys, but the robber doesn’t put his gun away. You start to run and the robber tries to shoot at you. You’re armed. You present your firearm and shoot your attacker. Your armed attacker runs one way and the truck drives off in the other direction. You’re shaken, but not hurt. You call the police. Fourth story- Are you armed when you’re throwing a party on your front porch? It is Friday night. Someone is cooking on the front porch. You’re talking to friends when three strangers walk up off the street. Two of them have guns out and pointed at the people at the party. They tell you to hand it over. You have your Texas license to carry. You’re armed. You move to get a clear shot, and then draw your firearm. You shoot the armed attacker closest to you. The other two attackers run away. Everyone calls the police. EMTs take the wounded attacker to the hospital. Links and text of the discussion at the podcast webpage.

About Rob Morse Rob writes about gun rights at Ammoland, at Clash Daily, and on his SlowFacts blog. He hosts the Self Defense Gun Stories Podcast and co-hosts the Polite Society Podcast. Rob is an NRA pistol instructor and combat handgun competitor. Elizabeth Hautman instructs on her private firing range in Black Forest, Colorado. Contact her at Colorado Boots Firearms Instruction.