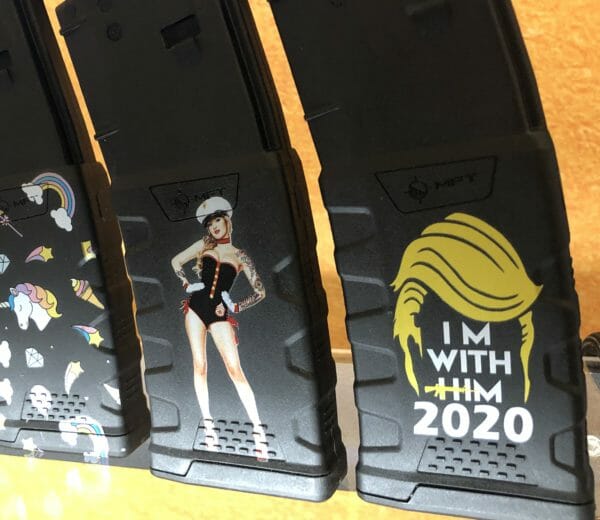 Mission First TacticalU.S.A. –-(Ammoland.com)- Day one of SHOT Show 2020, the industry’s largest trade show, is in the books.  While the event is closed to the public, I’d like to drop little updates that may be of interest to readers.  Major announcements are usually done by the parent company, in a news release that goes out before even gun writers have a chance to see it.  So what follows aren’t the major product announcements, but rather what stood out during the day. Wild Goose Chase at SHOT Show 2020 FirearmsRack.com and TuffProducts.com teamed up to make a “call and answer” patch duo.  One, the SHOT Show crud, was handed out at the range day by Patrick Roberts.  To get the cure you had to head to Tuff Products booth and present the Crud to receive the Cure.  It’s a small and entertaining way to break up the day and gave Tuff Products a chance to show off their custom PVC morale patch creations. 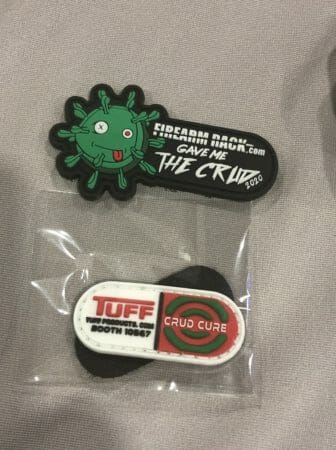 The crud, the cure. Another of Tuff’s patchesMission First Tactical This is a company that I like but has seemed to want for a more definite direction.  Holsters, mags, their famous Minimalist buttstock, and some EDC/lifestyle pieces have made up the bulk of their offerings.  This is still true, but I’m really feeling a more definite and defined push from these guys.  They have more buttstock options, more magazine options, and many more holster options. The mags are what got me through.  It’s hard to compete with a PMAG head-to-head.  MFT has chosen not just to offer polymer mags, nor just windowed mags, nor just mags with various colored windows.  You can now have your mags permanently altered to bear your custom art.  Using some sci-fi UV dye impregnating techniques (that I barely understand), MFT will whip up a new batch of mags featuring… whatever you’d like.  Expect a web portal soon allowing you to upload your own images. David Edelman of MFT told me the images would be durable, not likely to scratch off at the range.  This is due to the manufacturing process that doesn’t coat the surface of the mag, rather making the mag out of dyed polymer.  I tried to scratch it off.  It’s gonna take sandpaper and removing a good amount of material to get that off.  Expect ~$20 for each artsy mag.

Mission First TacticalRadical Firearms I may not have been on Radical’s bandwagon before today (due to QC issues in the past that I’d heard of) but after seeing what they’ve been making lately, I’m willing to give them their fighting chance.  Every company can have some growing pains, I’m more interested in what happens next.  Radical had some cool guns on display today, none that caught my eye like their pair of 10-22 RF 22 rifles.  One, with a 16” match barrel, Ruger BX trigger, CNC machined receiver with dual bolt tracks and an integral picatinny rail for ~$550.  The other was similar, but with an integrally suppressed barrel for ~$970. Radical FirearmsUlfhednar This Norwegian company has gained a lot of traction since I first saw them in the attic of the SHOT Show 4 years ago.  Now, they’ve partnered up with FAB Defense and an American marketing/distribution company to ease the intercontinental burdens.  But who should be excited about some Norwegian dude’s gear?  Long-range and precision shooters.  Here’s why: When supply is low, quality is at a premium.  There’s a lot of hunting and shooting going on in Norway, but not many local manufacturers catering to the market.  Ulfhednar’s range bags (and especially their shooting mat) are among the best I’ve seen.  They’re tough, well-designed and lighter than you’d expect. UlfhednarGrey Ghost Precision While GGP is far from a new company, walking through their corner of the show today felt like it was.  Nearly everything there is either a new SKU or a significantly updated version.  They’re near JBLM (Joint Base Lewis McChord) which houses both 1st Special Forces Group and 2nd Ranger Batallion.  GGP shares connections with the most demanding end-users in the military, as well as feeling the constant pressure from the civilian market to “innovate or die”.  These guys are NOT sitting on their asses talking about what worked last year, they’re working hard to meet what’s coming next year. What stood out was the number of pistol slide options they have.  From slotted to dimpled to RMR-cut subcompact slides, GGP is covering that segment well.  This includes major mass-market manufacturers, and also the GGP Combat Pistol. That is the first day of SHOT Show 2020 and some quick notes.  Check back in for more each day, or hit me up on Instagram @Rexnanorum for live updates. -Rex Nanorum @Rexnanorum

I didn’t get to go this year but watched the threads for update! Thanks for sharing this
Top
Post Reply Previous topicNext topic
2 posts • Page 1 of 1