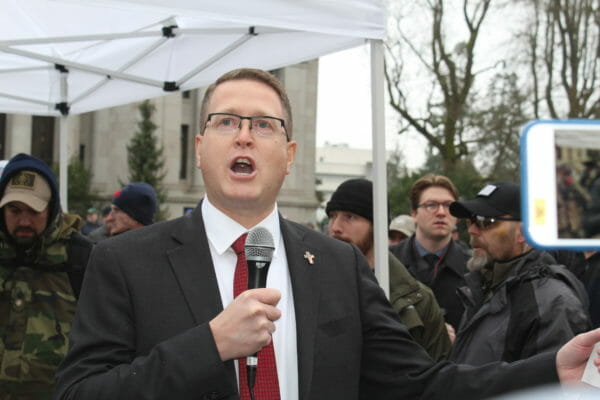 Embattled Washington State Rep. Matt Shea says he's being ‘targeted” for his success in defeating gun control bills. (Dave Workman)U.S.A. –-(Ammoland.com)- As hundreds of Second Amendment activists gathered at the Washington State capitol Friday—a prelude to hearings beginning this week on several gun control proposals—they heard from embattled State Rep. Matt Shea before he spoke exclusively to Ammoland about a report that he “participated in an act of domestic terrorism” relating to the armed takeover of Malheur National Wildlife Refuge in January 2016. Shea’s attendance at the rally, which drew a crowd various estimates place between 600 and 1,000, has drawn mixed reactions on social media, but many in the crowd carried signs declaring support for the eastern Washington lawmaker. He vowed to “never back down” from adversity. Following his remarks to the crowd, Shea told Ammoland that he has received thousands of messages of support. He asserted that he’s been targeted “because I’ve been very effective at killing anti-gun bills over the last several years.” That may be more difficult during this session of the Legislature because he has been suspended from the Republican caucus and his committee assignments have been taken away. This is in reaction to the 108-page report by the Rampart Group alleging Shea has been involved with far-right extremists and participated in what the report called “armed conflicts.” Three of those cases were identified: the standoff at Malheur NWR, an incident in Priest River, Idaho where a protest was organized on behalf of an elderly veteran who was allegedly being disarmed under Veterans Administration regulations after suffering a stroke, and the famous standoff between rancher Cliven Bundy and the U.S. Bureau of Land Management. The report contains several alarming allegations, including one on Page 81 asserting, “It is the professional opinion of the Investigators, that on a more probable than not basis, Representative Shea presents a present and growing threat of risk to others through political violence.” Shea’s supporters believe the report to be biased. Shea did not cooperate with the investigators. There have been calls for his resignation. 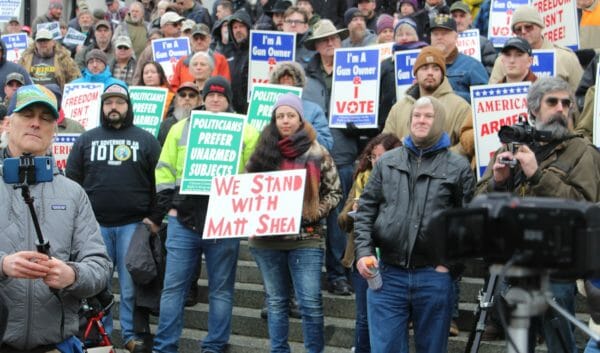 Shea's supporters were sticking by him during the Olympia rally. (Dave Workman)But Shea maintains his opponents want him removed from office because he is “kind of the person out front, in the public eye. Absolutely I’ve been targeted…for standing up for property rights and targeted for standing up for liberty. I’ve been very outspoken and I’m going to continue to be outspoken about these rights because they are worth talking about.” The Republican lawmaker said he is “absolutely” running for re-election in the fall, noting that he’s had more support lately “than I’ve ever had.” He has ignored the calls for his resignation, stating, “These attacks have occurred every year for the last 12 years. People are starting to see through them. They realize that anytime someone is labeled a criminal due process always applies…I think people are sick and tired of being guilty until proven innocent, instead of innocent until proven guilty.” It was a not-so-subtle reference to the Rampart report, which many believe is filled with inflammatory references, such  as “armed conflict.” Shea called the term “ridiculous,” recalling news video in which he is shown standing near the county sheriff in Priest River at the home of the veteran whose gun rights were—in the eyes of his supporters—being violated. “This is what they’re trying to use,” he stated, “and that shows the absurdity of this entire report. The other absurd thing that came out is they tried to label people racists for going up to Marble, Washington to a ‘God and Country’ celebration and they won’t interview the two black pastors that actually live there who are very upset about being called white supremacists.” Shea said his presence at Malheur came after a couple of protests, one in Burns, Oregon followed by the Malheur takeover. He said the refuge occupation was staged by the protesters to establish “standing” in court so the group could challenge federal ownership of the refuge lands. “We didn’t know any of this until we actually went out there, with several other state legislators, to find out what was happening,” Shea maintained. As Shea recalled, the group met with local officials and then went out to speak with the protesters at the refuge. “We hadn’t even made that decision at that point,” he insisted. Shea also said he helped negotiate a peaceful resolution to the standoff the night one occupant, LaVoy Finnicum, was killed at a roadblock. “You can’t be a domestic terrorist if you’re actually helping to defuse and deescalate a situation, and that seems to never be reported,” he contended. Shea also asserted that the investigation did not interview “three dozen” material witnesses, which he called “investigatory malpractice.” While Shea became the focus of much media coverage of the rally, the real story may be the growing frustration of energized Washington gun owners who spent the weekend preparing for gun control hearings and watching the drama in far-off Richmond, Virginia. There, State Sen. Amanda Chase has called on anti-gun Gov. Ralph Northam to resign for allegedly violating the constitutional rights of his constituents leading up to an anticipated massive Second Amendment Monday rally at the capitol. In Washington, the Senate Law and Justice Committee were scheduled to hear testimony on bills to limit magazine capacity to 10 rounds, to require proof of training to receive a concealed pistol license, penalties for the use of stolen firearms, and other bills. The House is considering legislation to repeal state preemption, background checks for ammunition purchases, and other restrictions. Here is a look at gun control legislation filed so far. From all indications, facing this kind of legislation, Evergreen State activists are looking at a tough session, while also looking ahead to the November elections when they hope to change the balance in Olympia, and the party in control of the governor’s office for the first time in more than 35 years. About Dave Workman