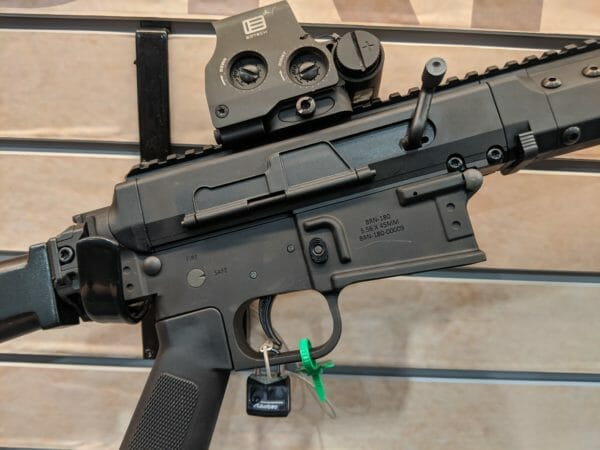 The BRN-180 lower replicates the lines of the AR-180.Las Vegas, NV., – -(AmmoLand.com)-  Over the last few years, we’ve seen the Retro Rifles lineup from Brownells grow to include a whole slew of popular AR-platform models. Last year, Brownells announced the addition of the BRN-180 side-charging upper receiver. The design was inspired by the Armalite AR-180 from the 1960s, which was created by Eugene Stoner and Arthur Miller. Developed as a successor to the original AR-15, the AR-180 was a civilian version of the AR-18, which was an upgrade on the M16 platform. The BRN-180 upper incorporated many of the AR-18/AR-180 improvements, including its robust and reliable gas piston operating system. Brownells BRN-180 Stripped Lower  Brownells BRN-180M Stripped Lower Like the original, the BRN-180 bolt carrier rides smoothly on a pair of guide rods. The carrier is buffered at the rear by a built-in polymer buffer with a molded-in steel plate that captures the guide rods. The bolt replicates the original AR-180 bolt design, right down to its use of a standard AR-15 extractor. They also replicated the ease of removing the BRN-180 upper's handguard. The recoil guide rods inside engage a U-clip that retains the handguard. When the bolt/carrier group is removed and the guide rods are pulled to the rear, the U-clip can be pulled down and the free-floating handguard assembly slid off. With some effort to retain a period look, the BRN-180 handguard has modern M-LOK slots and a Picatinny top rail that matches seamlessly to the receiver's MIL-STD 1913 rail. Most importantly, Brownells designed the upper to be compatible with any standard, mil-spec AR-15 lower receiver. However, there’s always room for improvement when it comes to design and performance. 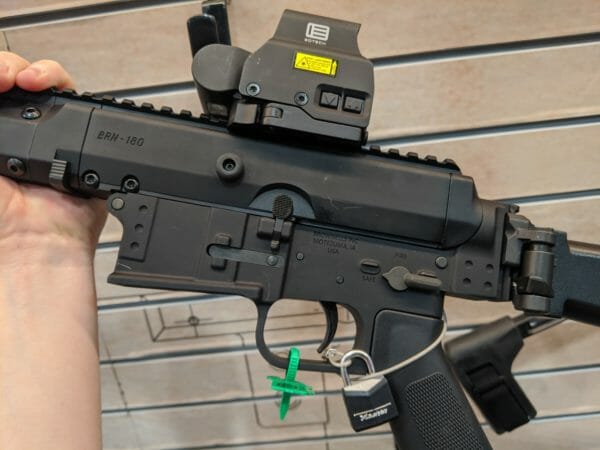 Brownells even added the “weld” marks to the lower for extra authenticity in appearance.For example, the BRN-180 upper doesn’t require the traditional buffer, buffer spring, and buffer tube that prevents you from installing a folding stock with a regular AR-15 without having to do some clever workarounds first. The buffer system is essentially just “extra parts” when combined with a BRN-180 upper, so that’s why Brownells has released lower receivers designed to work specifically with their BRN-180 uppers. The BRN-180 line of lower receivers do away with the traditional receiver extension threads, and in their place have a milled in 1913 Picatinny rail section for mounting of stocks or braces. Since variety is the spice of life, Brownells is offering not one, but two slightly different options for your BRN-180 build. The BRN-180 lower has the design and appearance of the original AR-180 lower receivers. It differs from the original in that this one is forged, while the historic counterparts were stamped, but you still get that classic AR-180 look because Brownells went so far as to replicate the “weld” marks seen on the stamped originals. 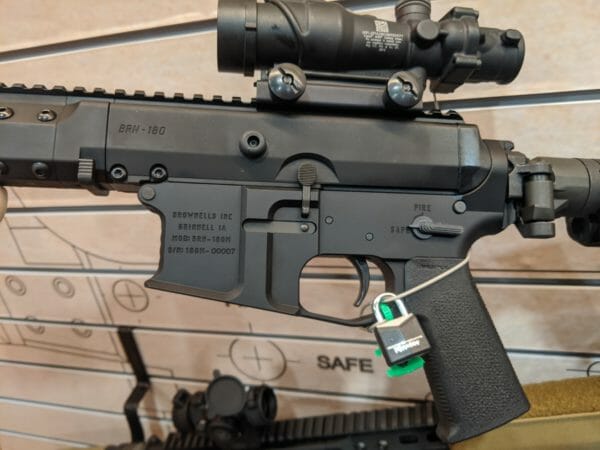 The BRN-180M lower looks more like a traditional AR-15.If you like the concept of these guns, but prefer a more modern aesthetic, then go with the BRN-180M lower. This option is a billet lower that provides all of the same benefits of the retro-looking option but instead looks like a more traditional or modern AR-15 receiver. The BRN-180M has an integral oversized trigger guard, and the unique features of a threaded bolt catch pin and captive set screw for the takedown pin detent spring, both of which are included. Brownells is offering both of these as stripped lowers. This way, you can customize your build with the retro external look of the BRN-180 lower paired with more modern internals. Or, you can go full retro and keep everything mil-spec. You could even opt to deck yours out and go with the BRN-180M and make your friends wonder how the heck your unusual folding, side-charging AR-platform rifle actually works! The BRN-180 stripped lower has an MSRP of $129, and the BRN-180M stripped lower has an MSRP of $149. About Logan Metesh