Opinion by George Persinger, with Alan Chwick and Joanne Eisen 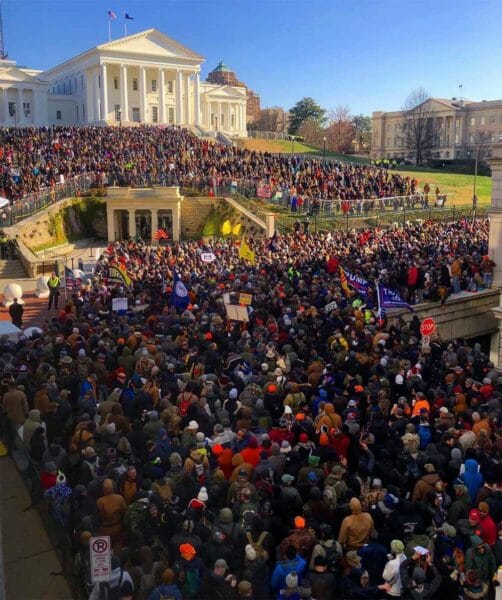 Virginia Gun Lobby Day 2020Virginia – -(AmmoLand.com)- I am okay with horse-trading, that's just politics at play. What you cannot do though, is corrupt the principals that form our Constitution, and especially our Bill of Rights. Principals do not change. We all understood that we were working under a contract created by our Founders. What we did not understand was how lawyers, judges, and politicians ignored that contract. They stole the power from us. Now we find ourselves in a situation that we cannot control. This must not stand. Look no further than SB64, submitted January 8, 2020. It states that any person who, “assembles with one or more persons with the intent of intimidating any person or group of persons by drilling, parading, or marching with a firearm” is guilty of a Class 5 Felony. So, Virginia being an open carry state, if you walk with a friend and someone does not like the expression on your face, you may need a lawyer and bail money. That's not right. This too must not stand. The current majority has no right to violate the founding principals which are retained by a free society. They are making lawful citizens into criminals when it is the real criminals who should be punished. Guns are not the issue. Progressives know they cannot achieve their goals under Article V of the Constitution which concerns amending the Constitution. Instead, they seek nullification, using lies and misrepresentation, through the Judicial Branch. Listening to Governor Ralph Northam's rhetoric and seeing the actions he was taking prior to the rally, made me reluctant to go. But I decided that I must. I left home on Sunday, checked into a motel, and hired a cab Monday morning. I arrived at the General Assembly Office Building, at 7:00 am. Buses were starting to arrive, and there were people walking in, as well. About 8:30-9:00, I started up the street to the corner of Tenth and Bank. This location is adjacent to the underground passage that the legislators use to enter the white Capital Building. This location, because of the fencing that Governor Northam had erected, became a gauntlet path for the legislators going from the Pocahontas State Office Building to the underground Capital passage. The passage was completely fenced in and was surrounded by us, the Patriotic Protesters. The crowd was getting heavy and I could not move from my location, but I would not want to, as the entertainment was just beginning. As legislators finished their joint meeting in the Pocahontas building they came sporadically, alone or in small groups, into the gauntlet. What happened next is important, and telling. Republican legislators would come over and interact with us at the fencing, shake hands, thank us, and show sympathy for enduring the wind and cold. The Democrats, on the other hand, slunk by, heads down, with only quick glances, and hurried into the tunnel. Not one Democrat came over. It was a long walk of shame, for them. While all this was happening helicopters, small planes, drones, and media on foot, were all about us. The crowd had grown larger, and my view could not encompass the entire event. Reports later estimated the crowd at approximately 22,000. No footage that I have seen shows the entire event at peak. Draw your own conclusions. Blacks, Asians, Hispanics, Gays, Women, and Children, all participated, Out of State supporters, and YES, white men were all represented. The cold was forgotten. Concerns for violence were unfounded, even though the Governor did all he could to escalate fear and make the area unsafe if violence did happen. The police were tense and business-like, at first. They steadily mellowed out as the Rally continued. They even seemed to enjoy the chants and recitation of the real Pledge of Allegiance, the “Star-Spangled Banner,” and something about a ‘raccoon and a man.' It was like a party celebrating the Constitution. The rally ended peacefully at noon and then we picked up the trash. Afterward, I made my way to an Irish pub, later called a taxi, and started for home.
https://www.youtube.com/embed/w68ejJGsN4U
Now the real struggle begins. This VA session is 60 days long. The House and Senate bills cross over in February. Many bills have “evil twins,” i.e. bills in both houses. If you thought some bills were dead, this is where and how they will arise again. We Virginians must pay close attention! Obviously a court battle looms in the future. but so do elections. Register to vote, and Vote, Support true, vetted candidates, and Seek the removal of party leaders who failed you, creating this mess. Attend your Board of Supervisors meetings and thank those who approved 2A Sanctuary status, for it played a huge role. Remind all that the fight continues. Every level of government needs to be made aware that Virginians are going to fix this and we are not going away. 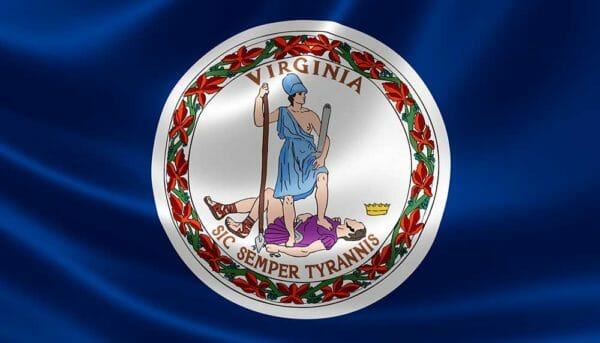 State of Virginia Flag iStock-ronniechuaVirtus* slays Tyranny on Virginia's state seal. Virtus is coming. * NOTE: (Wikipedia 3.00) Virtus: Virtus was a specific virtue in Ancient Rome. It carries connotations of valor, manliness, excellence, courage, character, and worth, perceived as masculine strengths (from Latin vir, “man”). It was thus a frequently stated virtue of Roman emperors, and was personified as a deity—Virtus.
About the authors: George M Persinger, a semi-retired Custom Home Builder, is a conservative, lifelong Virginian, who represents the enduring values originally agreed upon since this country split from England. He is passionate about VA's history and role in America. Virginians are reluctant to fight, but when forced, they are formidable opponents, hence the motto: Sic Semper Tyrannis. George is the owner of Persinger Construction and Green Parts of Va (www.GreenPartsOfVA.com), plus a former United States Marine. [email protected] Alan J Chwick has been involved with firearms much of his life and is the Retired Managing Coach of the Freeport NY Junior Marksmanship Club. He has escaped New York State to South Carolina and is currently an SC FFL & Gunsmith (www.Everything22andMore.com). [email protected] | TWITTER: @iNCNF Joanne D Eisen, DDS (Ret.) practiced dentistry on Long Island, NY. She has collaborated and written on firearm politics for the past 30+ years. She has also escaped New York State but to Virginia. [email protected]