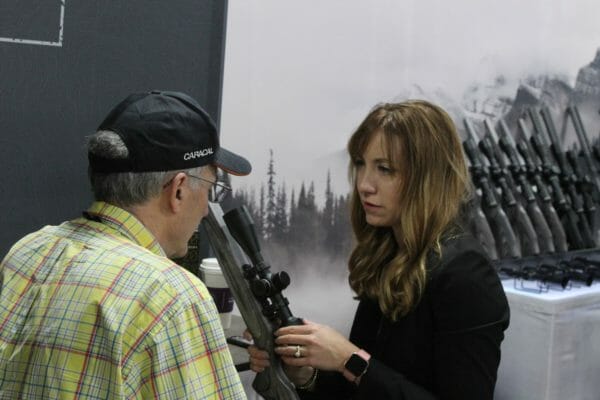 Calley Carpenter explaining the new features on one of her new Riton Optics scopes.U.S.A. –-(Ammoland.com)- The day started off fast. I’ve worked with Cameron Ownbey DeepCreekPR.com who is a marketing/PR extraordinaire over the past year. This morning I finally got to meet him and Natalie Skipper in person at breakfast. We strategized some game plans. Look for more of the to come in 2020. Riton Optics The doors opened at 8:30 and I met with Calley Carpenter and Jeremiah Alexander with the up and coming Riton Optics Co. They are gung-ho and aggressive. They’ve pretty much revamped their line-up of scopes. They made their decisions on what they thought were the top two key designators of their customers. Another smart thing they did was to classify their scopes under three headings. They have four price point designations, X1, X3, X5, and X7 with the X7 being the most expensive and boasting High-performance Japanese HD glass. Jeremiah has single-handedly added more reticle features. More to come in later articles on that. SAFE SHOOT SAFE SHOOT is an Israeli company that has a unique product. You and your hunting partner will have the device on them (on your Scope). If you inadvertently point your gun at them it will let you know. I have written a few articles in the past on them but more will be coming. Frogg Toggs They are famous for their rain gear but what most people don’t know is that their rain gear is also excellent to block the wind. They have two new products that I want to test. IRISH SETTER BOOTS It is always good to meet my Marketing buddy Kim Emery the PR guru with IS. IS has a few new items this year. Their Mud Tracker boots now comes in two models. The Athletic fit (thinner) and Full Fit. They also have three new options in their Vapr Trek line of hiking boots. They have a camo leather, Boa wire lace boot and a darker canvas type material. Can’t wait to try them out. Henry Repeating Arms I got to meet with Henry’s, which makes the coolest lever-action rifles. Who doesn’t love a lever action? The day before they introduced the world to their new 45-70 X Model and partnered with Federal which made their new Hammer Down ammo. I just got to talk to Henry’s momentarily before going into another meeting. More to come on this. CRKT I got to see some of CRKT's new offerings. They have a Kit Carson line. It utilizes a unique lock system called the Dead Bolt. With the push of a thumb button you can unlock the blade. It is a different system than utilized by other folders. They also have a Linchpen folder which uses ball bearings and is super smooth to open. ARCUS I’ve dealt with ARCUS for years. They have Obsession bows, which is what I hunt with but also Ram Cat broadheads and Trophy Taker accessories. Look for more articles this year on these products. GOTCHA COVERED-I walked by a booth up on the 5th level that is also from Idaho so I had to stop in. He has a lot of face nets on caps that should be good for bowhunting. I’m going to have to check them out. HUNTING4CONNECTIONS-In a Professional Outdoor Media Assn. meeting a couple of young ladies sat by me. We got talking after the meeting and they run a hunters dating website. That will be a little out of my wheelhouse but I may try to do an article or two on them. About Tom Claycomb