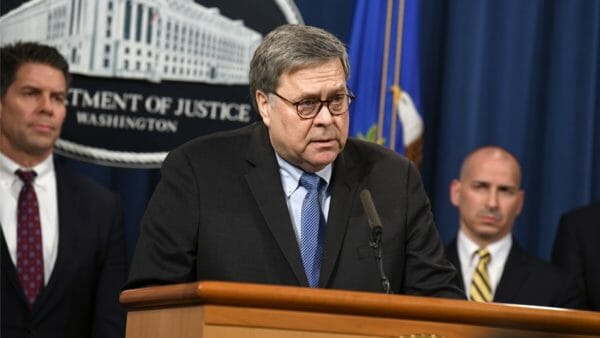 So what’s AG Barr prepared to do to enforce the Second Amendment? (U.S. Department of Justice)U.S.A. – -(Ammoland.com)-A Freedom of Information Act request was filed Tuesday with the Department of Justice by attorney Stephen D. Stamboulieh. The request, filed on behalf of this writer, seeks DOJ “statements of interest” in defense of the Second Amendment comparable to what the Department has done in defense of the First Amendment. “Imagine a society in which a citizen must petition the government for permission to meet with his fellow citizens,” the DOJ wrote in its statement filed in December in Brown v Jones County Junior College. “Imagine further that such requests must be made at least three days in advance of the requested meeting, and that the government has unbridled discretion to determine who may meet with whom, and about what they might speak. Such extreme preconditions to speech might not be out of place in Oceania, the fictional dystopian superstate in George Orwell’s Nineteen Eighty-Four. The First Amendment to the United States Constitution, however, ensures that preconditions like these have no place in the United States of America.” But “preconditions like these” have a place in the United States of America when it comes to the right of the people to keep and bear arms? Considering the historical evils that have always accompanied a “monopoly of violence,” Orwell’s Oceania seems like a resort community. “The United States further states that the Attorney General enforces 34 U.S.C. § 12601 ‘which provides in relevant part that governmental authorities and their agents may not ‘engage in a pattern or practice by law enforcement officers… that deprives persons of rights, privileges, or immunities secured or protected by the Constitution or laws of the United States’ and that the Attorney General ‘may in a civil action obtain the appropriate equitable and declaratory relief to eliminate the pattern or practice,’” the DOJ statement asserted. So they’ll go after violations for other rights, but where the Second Amendment is concerned, state entities can do as they please without fear of federal checks? Even though infringements directly affect the “security of a free State” by disarming the citizen Militia? So much for “the supreme Law of the Land.” This reminds me of nothing so much as “The Ashcroft Petition” project I co-authored and co-administered several years back. After then-Attorney General John Ashcroft had declared “the text and the original intent of the Second Amendment clearly protect the right of individuals to keep and bear firearms,” my colleagues and I decided to see if those were just words or if there was any chance the DOJ would do its job and protect individual rights from being infringed. The upshot—after collecting and submitting over 40,000 mailed-in signatures from supporters across the country (including “Gunners Guru” Col. Jeff Cooper), the only official reply we got was a mealy-mouthed nothing burger, pointedly sent from the head of DOJ’s Terrorism and Violent Crime Section. That, and I had to write a letter to then-NRA-ILA head James Jay Baker demanding that he instruct their California field rep to stop telling people not to sign the petition because those of us behind it were “wild-eyed extremists.” In any case, today is supposedly a new day and we have since had two Supreme Court cases confirming what Mr. Ashcroft once assured us, that the Second Amendment is an individual right. So now it’s time to find out what, if anything, our Department of Justice has done to fulfill duties it acknowledges in court filings to enforce against government actions “that deprive persons of rights, privileges, or immunities secured or protected by the Constitution or laws of the United States.” It’s time to find out what kind of “appropriate equitable and declaratory relief to eliminate the pattern or practice” we can expect from those whose entire existence is justified on doing just that. Here’s our FOIA request: FOIA DOJ Statement of Inter… I’ll write an update when I hear back from DOJ. About David Codrea: