The Laboratory of Democracy is Working, but Only if We’re Watching the Results

The Laboratory of Democracy is Working, but Only if We’re Watching the Results 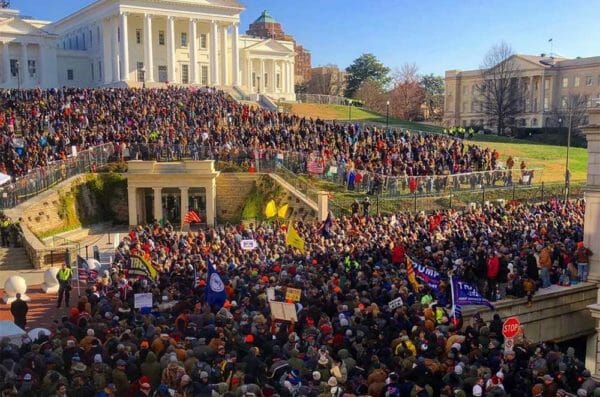 Virginia Gun Lobby Day 2020 croppedU.S.A.–-(Ammoland.com)- Our cities and states are different. Rules matter, and we can see how important the differences really are. Elections have consequences, but it might take time for the effects to become clear. This is one of those times. The laboratory of democracy is working. We get to see the policies that succeed and those that sounded good but failed miserably. Now, we have to expand the successes and make sure the voters correct their mistakes. Washington State– There was a violent attack in Seattle last week. Two criminals fought a gun battle on a crowded street. Eight innocent bystanders were wounded and another was murdered. It is important to note that Seattle has extensive gun-control laws by any standard. It also has a problem with mental health and open drug markets. Each time a criminal hurts innocent people, the state and local government put another infringement on the right of law abiding people to defend themselves. Seattle politicians said the new gun laws would make us safe. These laws did the opposite. Perhaps because of those new restrictions, both shootings and fatal shootings increased in Seattle. If you doubted before, here is clear evidence that criminals don’t obey our gun laws. The two murderers in the recent Seattle attack had 66 prior arrests. As convicted felons, they were prohibited from possessing firearms. Facing the public outrage for this attack, Seattle politicians will pass another ineffective gun-prohibition and put out another press release claiming they solved the problem. Unfortunately, the Seattle progressives won’t fix their failed judicial system. That means more innocent victims will die. Public policy in Seattle will only change once the voters of Seattle change their politicians. Will they learn, and will we learn from their experience?

Seattle doesn't have a gun problemCalifornia politicians work for the state employee unions. Now that they have huge unfunded state pensions, massive state debt, and huge outmigration of the middle class, the politicians have chosen to massively raise property taxes. Unfortunately, Californians already pay some of the largest taxes in the US, and the state has one of the worst climates for business. High costs and lack of jobs squeezed the middle class out of California. To give a concrete example, it is insanely hard to run a retail store in California when shoplifting goes unpunished. The shoplifters will bite and pepper spray the store clerks and then dare the store to call the cops. I don’t know how these shop owners stay in business, but the rest of us pay for their losses. California politicians also voted for extensive gun-control laws. With a state full of “gun free” zones, there are evidently too many disarmed and irresistible targets for mass murderers. Rather than deliver the peace the progressive politicians promised, California has a record number of mass murders. In this case, disarming the victims delivered more dead bodies. The only “hope and prayers” they deserve are that Californians change the future they voted for. Like helping a drug addict, it would be a sin to give them money before they hit bottom and fire their political junkies. We can learn a lot from California. California voters have given us a wonderful example of what not to do. New York recently instituted a catch and release plan for criminal, a.k.a. bail reform. The explosion of crime was remarkable. Bank robbers were back on the street in hours. Drug dealers who were caught with seven million dollars of fentanyl were released without bail. That would be comical if it were not for the lives at risk. You can now sell drugs, and use children to sell drugs, without having to post bail. You can strangle someone until they pass out..and then walk out of the police station with a ticket to appear. Victims of domestic violence should be terrified. If you live in New York, then expect your bank fees to increase to cover the increased costs of losses and security. I don’t know what you should do if you have children in New York and want to protect them from drugs on the street. It is cold comfort to remind you that this is the government you put in office..and can vote out of office. The rest of us can only watch in horror. Democrat politicians recently took over the state of Virginia. They hold both houses, and statewide offices. Virginia had the fourth lowest crime rate in the country. The democrats wasted no time in changing Virginia laws. Soon, 16 year olds in Virginia will need parental supervision to hunt on their own property, but will be able to get an abortion without informing their parents. There are the usual Democrat measures of drivers licenses for illegals, free tuition for illegals, and eliminating voter ID. Virginia Democrats also proposed a number of new gun-control laws. They proposed mandatory firearms confiscation. They also proposed mandatory background checks, not for a firearms sale, but for change of possession. That means you could neither use your friend’s gun, nor could you let your daughter-in-law have a firearm if she was being threatened without first going to a firearms dealer. Heaven help you if your daughter-in-law needs help on a Saturday night. Virginia Democrats also proposed magazine capacity restrictions, and to make the capital a “gun-free zone”.. unless you were an elected politician. The rules don’t apply to them, so they can carry what and where you can’t. At least 22 thousand citizens came to Richmond to protest and lobby for their rights. I don’t think the Democrats were listening. Money talks, and Virginia Democrats only heard the campaign donations from anti-gun New York Billionaire Michael Bloomberg. In response, we saw the second-amendment sanctuary movement spread across Virginia and across the rest of the country. When state legislatures don’t listen to the voters, then hundreds of thousands of voters went to their county boards. They asked for, and were usually granted, a measure saying that the county would not spend money and enforce laws that violated the US constitution. In Virginia, 91 out of 95 counties, 16 out of 38 independent cities, and 34 towns adopted second amendment sanctuary resolutions.

Second Amendment Sanctuary Counties as of January 2020- from WikipediaYou can buy an election, but you can’t buy the voters. The response to the takeover of Virginia isn’t over. Last week, the West Virginia legislature and governor invited the unrepresented counties in Virginia to secede from Richmond and become part of West Virginia. I was inspired. That might be the best political solution I’ve heard. There is a lot to learn as we look across these United States. I’m inspired by our successes, and we don’t have to settle for failure. If your vote doesn’t count at the ballot box, then vote with your feet.. or take your county with you. About Rob Morse