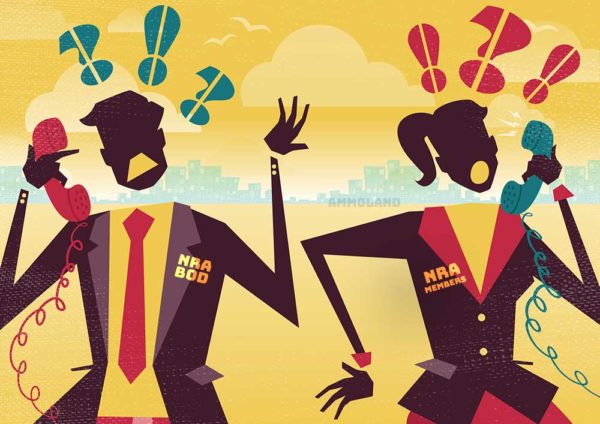 NRA Board of Director Questions from MembersUnited States – -(AmmoLand.com)- Second Amendment supporters can sometimes tell if legislation will improve the situation with regards to our rights very easily, as is the case with the Home Defense and Competitive Shooting Act. Some other pieces of legislation, like the TRACE Act, can be quickly rejected because we can tell it just infringes on our rights. But sometimes, legislation can be proposed that isn’t clearly good or bad at first glance. The HR 4939, the STOP Straw Purchases Act, is one such piece of legislation where it’s not an easy call. The legislation was introduced by Representative Don Bacon (R-NE), who has a solid record of supporting our Second Amendment rights. According to a release from his office, the legislation is intended to increase penalties for straw purchasers. Straw purchasers, in the context of Second Amendment issues, are people with clean records who are used to acquire guns for people prohibited from even possessing firearms under the provisions of 18 USC 922. The release notes that current law calls for a prison sentence of up to ten years and a fine of up to $250,000. The legislation increases it to up to 25 years in prison and a $750,000 fine. Among its provisions is a requirement that the 4473 form be edited to spell out the penalties for making a straw purchase. But it also creates two new criminal statutes that directly target those who run “straw purchase” operations. “Most of the gun-related crime is committed by someone who should not have access to a firearm, but they are able to get it because someone else makes the purchase. Local law enforcement have said this is one of their top priorities,” Rep. Bacon said in the release. “This was the case with Omaha Police Officer Kerrie Orozco who was killed in the line of duty and the gun used was obtained through a straw purchase. The purchaser walked away with a slap on the wrist. By closing loopholes and increasing maximum punishments for violators, this legislation will help to deter criminals from illegally obtaining firearms and bring justice and safety to our affected communities.” For the most part, this sounds good. The use of the word “loopholes” does constitute something that is not quite a red flag – it is often used by anti-Second Amendment extremists in efforts to enact new gun control laws – but on the whole, increased penalties for straw purchases is not a bad thing, and hammering those who run “straw purchase” operations could do a lot of good. The problem is that the current laws are pretty tough already. Someone who travels across state lines to deliver a firearm to a convicted felon who wants to use it to, say, rob a bank is facing serious prison time under 18 USC 922(d) and 18 USC 924(h) to the tune of up to 20 years in prison. For one gun. In 1999, the NRA ran a rough calculation on a small-scale gun trafficking op (not involving straw purchases), that had a maximum prison sentence of almost 1,000 years in prison. The big problem: They are not used, even as Project Exile showed that enforcement of some laws could work. So, in essence, passing the STOP Straw Purchases Act would be an exercise in appearing to do something – but in all likelihood, we would never see these laws enforced or those tough sentences used to deter “straw purchases.” That being said, the legislation does make for a very good talking point, and unlike the TRACE Act or the Multiple Firearm Sales Reporting Modernization Act of 2019, it targets those who break the law. There are good arguments on either side of this bill. So, read the text, talk it over with fellow Second Amendment supporters, and whether you decide to urge its passage or defeat, contact your Representative and Senators and politely make your case. About Harold Hutchison Writer Harold Hutchison has more than a dozen years of experience covering military affairs, international events, U.S. politics and Second Amendment issues. Harold was consulting senior editor at Soldier of Fortune magazine and is the author of the novel Strike Group Reagan. He has also written for the Daily Caller, National Review, Patriot Post, Strategypage.com, and other national websites.