Are WA Armed Citizens Being Penalized for Seattle Shooting?

Are WA Armed Citizens Being Penalized for Seattle Shooting? 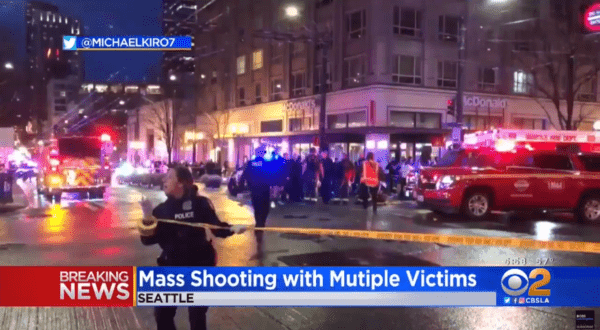 A wild shooting in downtown Seattle was followed by more calls for gun control, leaving Washington gun owners once again facing punishment for a crime they didn't commit. Two suspects in that event, which left one woman dead, have been apprehended in Las Vegas. (Screen snip, YouTube, CBS News)U.S.A. –-(Ammoland.com)- The Washington State House Civil Rights and Judiciary Committee has voted to pass legislation making it more difficult for Evergreen State gun owners to obtain and renew their concealed pistol licenses just one day before Las Vegas authorities arrested two suspects whose illegal gun use in downtown Seattle brought familiar cries for more gun control. It evidently doesn’t matter that the two suspects in last month’s fatal fracas could not legally possess, much less carry, firearms. While the state Department of Licensing last Friday advised Ammoland News that there are now 647,233 active CPLs in the state—the highest number of any far western state, except for Utah—suspects William Tolliver and Marquise Latrelle Tolbert don’t have one. They were apprehended after being on the run more than a week, during which time they became examples of a justice system in serious need of repair. According to Seattle’s KING 5 News, the local NBC affiliate, Tolliver has 44 arrests, one felony conviction and 18 gross misdemeanors on his record. Tolbert has been arrested 21 times, with three felony convictions and a dozen gross misdemeanors in his file. But lawmakers in the Seattle area want to make it tougher for law-abiding citizens to be armed. Passing House Bill 1315 on a party-line vote out of committee is the first step. It requires proof of firearms safety training to apply for or renew a CPL, something never before mandated in the 85 years Washington has been licensing concealed carry. The state first adopted a carry law back in 1935. Last year at this time, according to the Department of Licensing data, Washington reported 613,626 active CPLs. This translates to a boost of 33,907 additional licenses over the past 12 months in a state thought to be politically blue. One woman was killed in the Tolliver-Tolbert shooting that involves a third suspect, also in custody, and seven others were wounded. Seattle is the largest city in the state, located in King County, where the highest number of CPLs is reported. The county has 103,911 active CPLs, about one-sixth of all the licenses in the state. Committee approval of the measure raised alarms at the National Rifle Association, which sent this bulletin to Evergreen State members over the weekend. Members can contact their district lawmakers by going to the site and sending a message, or by calling the Legislative Hotline at 800-562-6000. The Seattle P-I.com reported about an emotional confrontation between local business leaders and Seattle officials in the aftermath of the shooting. The City Council’s Public Safety and Human Services Committee saw a forceful crowd last week demanding change, and even the Seattle Times editorial page took city leaders to task for blaming guns. “In this case, blaming guns sidesteps hard questions about why the city isn’t better protecting people from known dangers of the drug epidemic and related crimes,” the Seattle Times editorial said. The Democrat majority in Olympia—the state capitol where the Legislature is now in session—should pay attention not just to the trend in their own state but nationally. Increasing numbers of gun owners are getting licenses to carry. The Crime Prevention Research Center (CPRC), headquartered in Virginia where guns are also a hot button issue, estimates more than 18.66 million citizens are now licensed to carry across the states. That’s 18.6 million voters, enough to swing many an election this fall. Democrats in Virginia will not be running again until 2021, but gun owners in the Old Dominion have long memories and they aren’t likely to be in a forgiving mood. Between 5 and 10 percent of qualified adults have a carry license in Virginia, according to CPRC data. In Washington state, that percentage hovers between 10 and 15 percent, the CPRC estimates. While an estimated 600-1,000 gun owners gathered in Olympia Jan. 31, a much larger crowd is anticipated when the March For Our Rights group holds its third annual rally day in Olympia April 18. That’s long after the Legislature adjourns on March 12, and it falls more than a month after the Washington State primary on March 10. But a strong turnout will send a message to anti-gun Democrats, especially those in vulnerable districts, that things could change in November. Last year, some 2,500 gun owners turned out for the event. MEANWHILE, neighboring Oregon begins its legislative session this week, and there are gun control proposals in the works. In a bulletin to its members, the Oregon Firearms Federation warned, “the Democrats in Salem are wasting no time trying to ram through their anti-gun agenda.” High on their list of priorities is House Bill 4005, a so-called “secure storage” bill. It is slated for a hearing this Friday Feb. 7 before the state House Judiciary Committee, OFF said. According to OFF, this bill would penalize law-abiding gun owners if a thief is able to defeat a cable lock or some other device and use a stolen gun in the commission of a crime.
Second Amendment activists throughout the Pacific Northwest are essentially “behind enemy lines” with anti-gun Democrats controlling both the Oregon and Washington legislatures and Democrats in both governors’ offices. Gun owners in both states have traditionally been a lethargic bunch, but they appear to be energizing this year, with a lot at stake. Maintaining their momentum into November is going to be a daunting challenge, but anti-gunners may make that easier if they push gun control initiatives and otherwise ratchet down on gun rights on both sides of the Columbia River. About Dave Workman