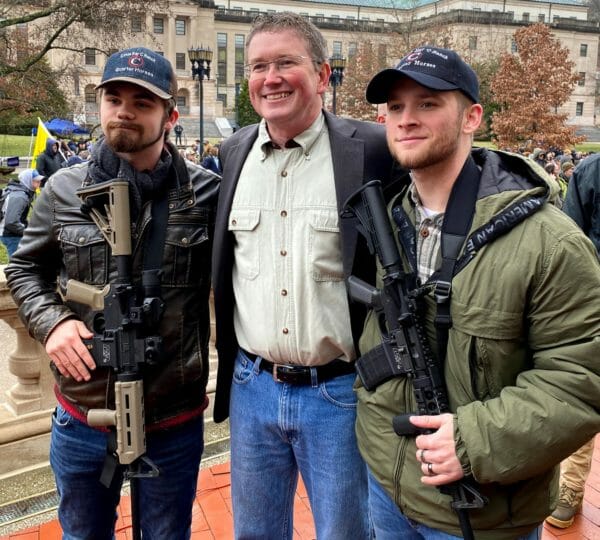 According to citizen disarmament fanatics, trusting patriotic Americans to responsibly exercise their rights is now an example of racist “white privilege,” and as with “Red Flag laws,” the default should be to presume them guilty of violent intent. (Congressman Thomas Massie / Facebook)U.S.A. – -(Ammoland.com)- “Hundreds of Second Amendment supporters and gun owners gathered in Frankfort to support gun rights as open carry allowed inside state capitol,” the Louisville Courier Journal reported Sunday. “The images and videos from Friday's gun rights rally at the Kentucky Capitol in Frankfort have evoked strong reactions from both sides of the political spectrum.” So naturally, because it follows a narrative they are committed to following, the media and the gun-grabbers are diverting public focus from  freedom by smearing rally participants as white racists. You know, using the same propaganda talking points as communists who exploit useful idiots until such time as they’re discarded as useless eaters. “I’ve never felt safer at a gathering in my life,” Rep. Thomas Massie declared. “Also, got some ideas for a new AR build. Great rally Friday at the Kentucky state capitol!” As an aside, Massie continues to prove himself to be the real deal, a politi…correction, a citizen representative who actually had his rating downgraded by NRA for being too pro-gun. As an aside, find some time to watch “Off the Grid” to get just a feel for the breadth of his knowledge and capabilities. Moving from a man of much accomplishment to a boy whose “achievements” have been staged and managed, we see David Hogg’s “reasoned discourse.” “This might be one of the most extreme forms of white privilege I’ve ever seen,” he tweeted, seemingly oblivious to his admission to exclusive and pricey Harvard with an SAT score lower than the average accepted student’s. “Let me get this strait, when the black panthers armed themselves against a white supremacist government they’re written off as dangerous criminal terrorists,” he tweeted again. “But the same people say when these guys use armed intimidation it’s patriotic resistance.” A diversity of gun owners of color were at Richmond, dubbed in one deservedly viral meme the “worst white supremacist rally ever.”  It’s always been the right to keep and bear arms advocates fighting against infringements for all peaceable people. And that creates a bizarre cognitive dissonance the gun-grabbers ignore lest they be confronted with their own illogical disconnect: Accusing police of targeting blacks and then advocating police should be the “Only Ones” with guns. And see what I mean about “strait” out of the communist playbook? The point is made. We’d be spinning our wheels to try and include every politician, gun-grab group and “Authorized Journalist” trying to virtue signal how awful, racist and terror-spreading they find the Kentucky rights activists to be. One more example that stands out though and merits mention is Rolling Stone, as it actually complains: “Fully armed rally-goers enter Kentucky’s capitol building with zero resistance.” Even though no laws were broken? A bloodthirsty lot, aren’t they? That would only have been appropriate had the gun owners been doing something violent and victimizing others, but it's not like they’re “MTA fare protesters” or anything (Hint to the antis: Ours is the side that picks up litter after we peaceably exercise our First Amendment-recognized right to petition our representatives.) It's almost like the DSM is hysterically publicizing this hoping it will attract some crazy — who will invariably turn out to be one of theirs — to go in and prove them right. What this does more than anything is expose a larger point, the evil fallacy of “gun-free zones.” After all, if Americans can't be trusted in the Capitol, or a campus, store, church or school while armed, we can't be trusted with firearms anywhere. Right? That is exactly the swindle the disarmament fanatics and the totalitarians-in-waiting behind them want most Americans to fall for. And that’s why, if you’re one of “those” gun owners accusing the rally-goers of “making us all look bad,” consider this: With all the life-destroying edicts the collectivists are shoving in our faces now and threatening to do to us if they win big in November, sometimes revealing just who they’re trying to disarm by fraud and force is not only appropriate, it’s overdue. The fight we’re in is more than political, it’s existential. Be careful not to play into the hands of the enemy by making us all look divided and weak.
About David Codrea: