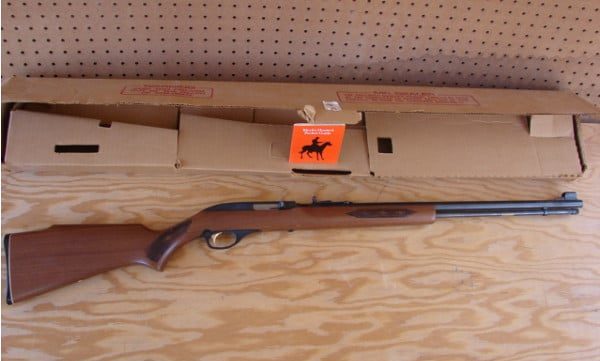 “Assault weapon” under proposed Florida ballot initiative. Courtesy Dean WeingartenU.S.A. –-(Ammoland.com)- The Florida referendum to ban common rifles and shotguns as “assault weapons” has failed to gather enough signatures to appear on the 2020 ballot. [url=http://To%20make%20it%20on%20the%20November%20ballot,%20organizers%20had%20to%20gather%20766,200%20verified%20signatures%20by%20today.%20The%20organizers%20fell%20well%20short%20with%20just%20147,304,%20according%20to%20the%20Secretary%20of%20State.]From tampabay.com[/url]: To make it on the November ballot, organizers had to gather 766,200 verified signatures by today. The organizers fell well short with just 147,304, according to the Secretary of State. 147,304 signatures is a bit more than 19% of the required number.  Signatures are valid for two years. The ban proponents started to gather signatures on 28 November 2018. They have until 27 November 2020, before previously gathered signatures start becoming invalid. While touted in the legacy media and in proponents' advertising as a “ban on assault weapons”, the measure bans possession of virtually all semi-automatic rifles, many semi-automatic shotguns, but no handguns or pistols. The ignorance of the writers has rendered a referendum that is both draconian and ineffectual for its stated purpose. Here is the text of the proposed Florida Constitutional Amendment. From ballotpedia.org: (e) The possession of an assault weapon, as that term is defined in this subsection, is prohibited in Florida except as provided in this subsection. This subsection shall be construed in conformity with the 2nd Amendment to the United States Constitution as interpreted by the United States Supreme Court. 1) Definitions – a) Assault Weapons – For purposes of this subsection, any semiautomatic rifle or shotgun capable of holding more than 10 rounds of ammunition at once, either in a fixed or detachable magazine, or any other ammunition feeding device. This subsection does not apply to handguns. b) Semiautomatic – For purposes of this subsection, any weapon which fires a single projectile or a number of ball shots through a rifled or smooth bore for each single function of the trigger without further manual action required.
c) Ammunition-feeding device – For purposes of this subsection, any magazine, belt, drum, feed strip, or similar device for a firearm. Limitations –  a) This subsection shall not apply to military or law enforcement use, or use by federal personnel, in conduct of their duties, or to an assault weapon being imported for sale and delivery to a federal, state or local governmental agency for use by employees of such agencies to perform official duties  b) This subsection does not apply to any firearm that is not semiautomatic, as defined in this subsection.  c) This subsection does not apply to handguns, as defined in Article I, Section 8(b), Florida Constitution. d) If a person had lawful possession of an assault weapon prior to the effective date of this subsection, the person's possession of that assault weapon is not unlawful (1) during the first year after the effective date of this subsection, or (2), after the person has registered that weapon by make, model, and serial number with the Florida Department of Law Enforcement or its successor agency, as designated by the legislature. Registration records shall be available to local, state and federal law enforcement agencies for valid law enforcement purposes but shall otherwise be confidential. 3) Criminal Penalties – Violation of this subsection is a third-degree felony. The legislature may designate greater, but not lesser, penalties for violations. 4) Self-executing – This provision shall be self-executing except where legislative action is required in subsection 2)(d) to implement registration of weapons lawfully possessed prior to the enactment of this subsection or in subsection 3) to designate a more severe penalty for violation of this subsection. 5) Severability – The provisions of this subsection are severable. If any clause, sentence, paragraph, section or subsection of this measure, or an application thereof, is adjudged invalid by any court of competent jurisdiction other provisions shall continue to be in effect to the fullest extent possible. 6) Effective date – The effective date of this amendment shall be thirty days after its passage by the voters.[3] As I wrote in a previous article in June of 2019: Once the measure is on the ballot, it has to be approved by 60% of the voters in the election to become an amendment of the Florida Constitution. If it passed with 60% of the vote in 2020, it would immediately be challenged as unconstitutional under the Second Amendment of the United States. The Heller decision, while it was about handguns, clearly stated the Second Amendment that “extends, prima facie, to all instruments that constitute bearable arms, even those that were not in existence at the time of the founding.” 554 U.S. 570, 582, 595 (2008).” The promoters of the referendum are relying on the ignorance of voters, combined with an anti-Second Amendment media and massive funding from billionaire contributors, to pass it. They are calculating most voters won't read or understand the definition, or know about the exception for pistols. The language is unconstitutional on its face, but the past decade has shown the Supreme Court unwilling to hold most lower courts to its decision in Heller. In fourteen months, the proponents have been able to gather less than 20% of the signatures required to put the constitutional amendment on the ballot. It seems unlikely they will succeed in obtaining the remaining 80% in the 10 months remaining. Two imponderables are in the mix. First, the referendum measure is stated as being misleading to the point of being fraudulent by Attorney General Ashley Moody. From miamiherald.com: “It is so far-reaching and misleading, it would also include guns like the gun my grandfather gave my father and his brother when they were 9 and 10, 60 years ago,” she said in August. The Florida Supreme Court has to approve of the referendum language before it is put on the ballot. AG Moody may persuade the Court to refuse to accept the measure because of the misleading language.  The Court is expected to hear arguments about the language on 4 February, 2020. Second, there may be another mass murder the media can use to inflame public emotion, to the point where the 80% deficit of signatures can be recruited. At this point, it seems unlikely the anti-Second Amendment proponents of the measure will obtain enough signatures. The public will find out on 1 February 2022. About Dean Weingarten: