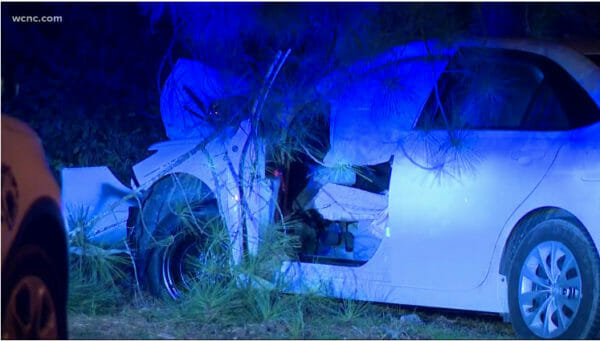 Screenshot from WCNC video, cropped and scaled by Dean WeingartenArizona -(Ammoland.com)- An armed victim, armed Samaritans, and the police all worked together to arrest young, violent, criminal suspects and stop a crime spree in Charlotte, N.C. The details of the events are recorded in the reporting of WCNC, but they take some careful reading to untangle. It probably started on January 29th. That is when the car the criminals used in their crime spree was reported stolen. We do not know the precise time the offenders stole the white Toyota Camry they used in their crimes. Early in the morning of 4 February 2020, at about 4:30 a.m.,  two suspects tried to break into a vehicle at Otter Creek Drive.  The husband of the woman who owned the car told police two suspects had fired shots at him as they drove away in a white Toyota Camry. About 20 minutes later, it is believed the same suspects attempted an armed robbery/carjacking at Clems Branch Drive. A masked suspect threatened a driver. This victim was armed. He fired at the suspect who ran from the scene. The white Toyota Camry drove off. A white Toyota Camry was spotted by the police moments later. The driver refused to pull over. The pursuit led to Bevington Place, where the driver crashed the white Toyota Camry into a tree. It appears to have been totaled. The police arrested the driver at the scene. At this point, the police found the white Toyota Camry had been stolen. Roughly an hour and a half later, the police responded to a call of a shooting just off Lancaster Highway, on Meyers Mill Lane. A 17-year-old had reportedly attempted to steal a car from a woman. The woman had surrendered the keys when the woman's husband came out and started to wrestle with the subject, who was armed. Neighbors heard the commotion and surrounded the armed suspect. Some of the neighbors were armed.  (The transcript says “a neighbor”. The video says “neighbors”.) One armed Samaritan ordered the suspect to drop the gun. When the suspect refused, the neighbor shot him. The wounded suspect was transported to the hospital. Charlotte-Mecklenburg Police Captain Wagner was reported to state he believed all the crimes were connected. The first suspect arrested was an adult teen who was already a convicted felon. It is highly likely this was not the first violent felony the 17-year-old second suspect was involved in. There were many victims of these violent criminals. Remember the owner of the white Toyota Camry. They have lost their vehicle, and face many hours of difficulties in recovering some of what they have lost. This is not the first time I have read of criminals being confronted by more than one armed member of the public during a crime spree. As more and more people have and carry firearms for defense, it is understandable that criminals find themselves on the wrong end of a firearm more often. It is reasonable to believe this would result in a falling crime rate, at least for violent crimes. Professor John Lott's work shows a statistical correlation between increased numbers of people with carry permits and a decrease in violent crimes.
About Dean Weingarten: Dean Weingarten has been a peace officer, a military officer, was on the University of Wisconsin Pistol Team for four years, and was first certified to teach firearms safety in 1973. He taught the Arizona concealed carry course for fifteen years until the goal of Constitutional Carry was attained. He has degrees in meteorology and mining engineering and retired from the Department of Defense after a 30-year career in Army Research, Development, Testing, and Evaluation.