Medal of Honor MondayUSA – -(AmmoLand.com)- For this week's Medal of Honor Monday, we're highlighting Marine Corps Capt. Raymond Murphy, a recipient who honorably served his fellow Marines during war, then spent the rest of his life serving them, as well. Murphy was born Jan. 14, 1930, in Pueblo, Colorado. He had three brothers and a sister and said he loved to play sports growing up. He was finishing his bachelor's degree in 1950 when the Korean War broke out. 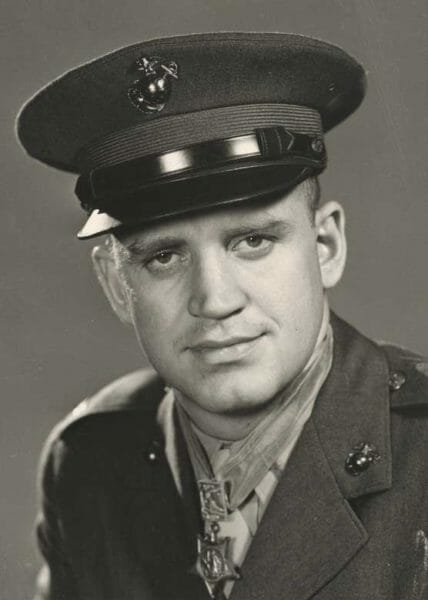 Medal of Honor Monday: Marine Corps Capt. Raymond Murphy, the Medal of Honor around his neck.Toward the end of his senior year, the draft was becoming more of a concern, so Murphy got advice from two of his older brothers — both of whom had already served. He decided he would try to become an officer, so he joined the Marine Corps after graduation and earned his commission. Murphy was placed in Company A, 1st Battalion, 5th Marines, 1st Marine Division. It wasn't long before he was sent to Korea, where he earned the Silver Star while commanding an infantry platoon in Seoul in late 1952. On Feb. 3, 1953, Murphy earned the Medal of Honor by taking charge when several of his superiors went down. On that day, Murphy's company was positioned near the Imjin River, and their mission was to keep Chinese communist troops from getting a foothold on the hill. Murphy, a second lieutenant at the time, was commanding a reserve platoon that was positioned to help wounded men from the two forward-fighting platoons. Quickly, Murphy realized something was wrong when there were no wounded men coming back to them. He decided to move his platoon up to see what was going on. As they got closer to the front line, he realized that all of the forward platoons' officers and noncommissioned officers were dead or seriously wounded. The lack of leadership caused mass confusion among the remaining ranks. 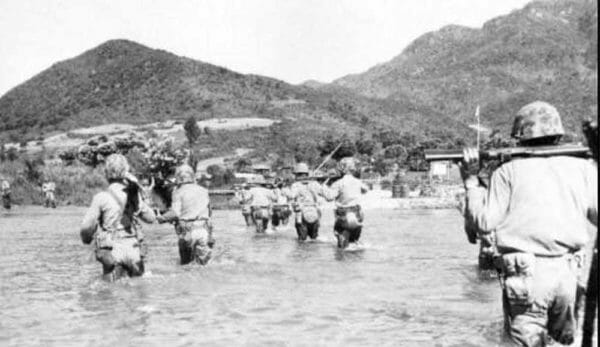 Members of the 5th Marines slog through a flooded area of Korea on the way back from a day of training. Through thigh-high water carrying weapons on their backs, walking toward a hill in the distance.Murphy immediately took command, ordering his platoon to find their comrades and evacuate the area despite the heavy machine-gun fire raging around them. Murphy himself was seriously wounded by fragments from a mortar shell, but he refused help and continued to lead his men up the hill to find more pinned-down Marines. Murphy made several trips up and down the hill as it was blanketed by enemy fire, directing evacuation teams to the wounded and carrying several injured men to safety. Murphy ordered part of his unit to help the attack platoons when they needed reinforcements. He took out two enemy combatants with his own pistol. When all the wounded were evacuated, the assault platoons started to move down the hill. Although injured, Murphy stayed behind to cover their backs, fending off enemies who reappeared in the trenches with a carbine and an automatic rifle. 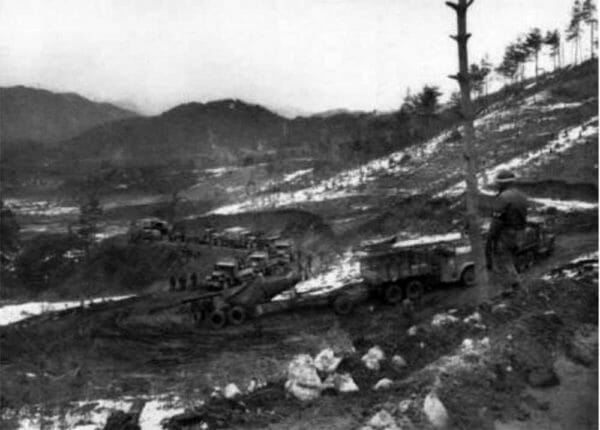 Slowed by muddy roads, the 5th Marines and reinforcing artillery move into their sector as the division occupied new positions along the Jamestown Line northeast of Seoul, Korea.Once Murphy got to the hill's base, he organized a search party and went back up one more time to make sure no one had been left behind. During that search, they found the bodies of a machine-gun crew, which they carried down. But they weren't in the clear. Enemy guns, artillery and mortar fire continued to cascade on them from above, and Murphy was wounded a second time while trying to get the company to the main line of departure. He refused to get help for himself until everyone else made it through to safety. Years later, Murphy explained his thinking. “That's one of the big things you're trained for in the Marine Corps. You get casualties, and even men you didn't know, whether they were alive or not — you get them out of the front line and get them back to where the medical people could look at them,” he said in a Veterans History Project interview. “This is the purpose of the war — to save your men and take care of the enemy.” Murphy returned to the states shortly after that battle and was promoted to captain. He later left the service and enrolled in graduate school, where he was when he learned that his actions in war had earned him the Medal of Honor. He received the medal from President Dwight D. Eisenhower in a While House ceremony on Oct. 27, 1953. It went well with the Silver Star, Purple Heart, Korean Service Medal with two bronze stars, and the United Nations Service Medal he also earned during his short military career. 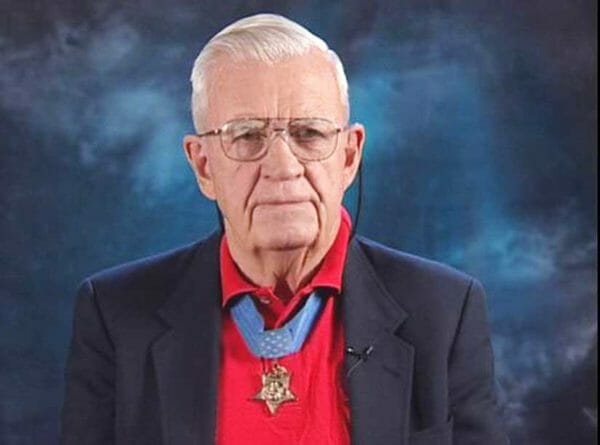 Marine Corps Capt. Raymond G. MurphyMurphy went on to marry and have four children, and he spent most of his civilian career in service to other veterans after settling in New Mexico. He served as the director of veteran services at what is now the Department of Veterans Affairs center in Albuquerque from 1974 to 1997. When he retired, he continued to serve the center as a volunteer, pushing veterans in wheelchairs to their medical appointments. Murphy died on April 6, 2007, at the age of 77. He was buried in Santa Fe National Cemetery wearing his VA hospital volunteer smock. Murphy's love for his fellow veterans was so well-known that, in 2008, the VA hospital where he worked was renamed the Raymond G. Murphy VA Medical Center. Former New Mexico Rep. Stevan Pearce praised Murphy during the renaming process. “Many of us too often believe that heroism can only be exhibited in those extreme circumstances. But I would say that it takes more courage to live a life of service that he chose to live after his heroic exploits. He wasn't faced with multimillion-dollar book-signing deals, no movie contracts — just a quiet life serving other veterans who are often overlooked.” A life that is well worth honoring. This article is part of a weekly series called “Medal of Honor Monday,” in which we highlight one of the more than 3,500 Medal of Honor recipients who have earned the U.S. military's highest medal for valor.

Thank you Captain Raymond Murphy and the 5th Marines for your brave service during the Korean War.
Firearms Safety is No Accident. Jim
Top
Post Reply Previous topicNext topic
2 posts • Page 1 of 1