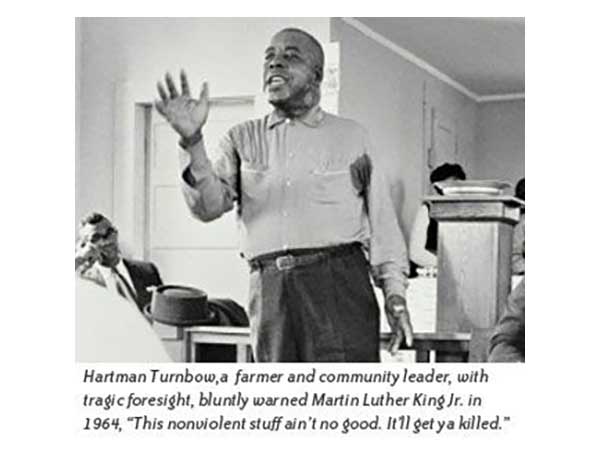 Hartman TurnbowUSA – -(AmmoLand.com)- Hartman Turnbow (March 20, 1905 – August 15, 1988) was a Mississippi farmer, pro-gun advocate, orator, and activist during the Civil Rights Movement. On April 9th, 1963, Turnbow was one of the first African Americans to attempt to register to vote in Mississippi, along with a group called the “First Fourteen”. Turnbow was born on March 20, 1905, in Mileston, Mississippi. His grandparents were former slaves and he inherited their farm. He moved to Chicago, Illinois where he met and married his second wife Dee. They returned to Mississippi with their children, settling in Tchula, where he became an independent farmer and owned his land. Voter Registration On April 9th, 1963, Turnbow, with a group of 13 other African Americans, including Hollis Watkins, Ozell Mitchell, and Alma Mitchell Carnegie arrived at the Holmes County, Mississippi courthouse in Lexington in an attempt to register to vote. This group became known as the “First Fourteen”. The “First Fourteen” were approached by a myriad of whites who attempted to intimidate and prevent the group from registering to vote. In a thick mob of angry whites, deputy sheriff, Andrew Smith, with his hand on his gun holster, called out, “All right now, who will be the first?” At that point, Turnbow stepped forward and told the deputy sheriff “Me, Hartman Turnbow. I came here to die to vote. I'm the first.” All fourteen took the literacy test and were failed by the circuit clerk. Although none of the “first fourteen” were able to register, their pride and courage drove the Movement in Holmes County. After Turnbow tried to register, he noticed that a write up in the Lexington Herald reported that “Hartman Turnbow was an integration leader.” Two weeks or a little after he found that his house was firebombed and shot at, all at the same time. Turnbow shot back at the night riders with his .22 rifle, and it was rumored that he may have killed one of the attackers. Turnbow believed that he had a right to defend himself and his family, explaining, “I had a wife and I had a daughter and I loved my wife just like the white man loves his'n and a white man will die for his'n and I say I'll die for mine.” 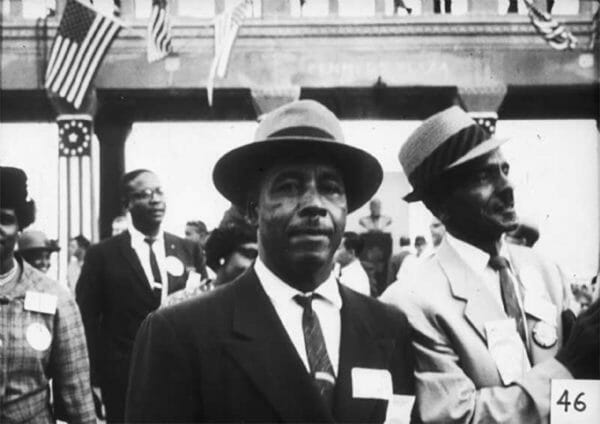 Delegate Hartman TurnbowMississippi Freedom Democratic Party (MFDP) In April 1964, the Mississippi Freedom Democratic Party (MFDP) was founded. Turnbow was elected delegate of the Mississippi Freedom Democratic Party (MFDP) at the 1964 Democratic National Convention in Atlantic City, New Jersey where he testified his personal accounts with voter suppression. Turnbow spoke in an unusual way that is now known as “Turnbowisms” and had a tendency to utter malapropisms, as he once referred to Student Non-Violent Coordinating Committee (SNCC) as the “student violent non-coordinated committee.”Yet he knew how to deliver powerful speeches and act as an inspirational leader for others. Nonviolence Freedom Movement Hartman Turnbow famously confronted Martin Luther King Jr. informing him: “This nonviolent stuff ain’t no good. It’ll get you killed.” The practice of nonviolence has been a centerpiece tactic for African Americans in the Civil Rights Movement and King wished to elevate this tactic. In May 1963, Turnbow fought off an attack on his family and himself with rifle fire. Being consistent with the foundation of the freedom movement, Turnbow explained, “I wasn’t being non-nonviolent, I was just protectin’ my family.” In this instance, Turnbow exercised his right to private self-defense just like Fannie Lou Hamer. SNCC’s Joyce Ladner accompanied Turnbow and his wife in Atlantic City for the 1964 Democratic National Convention. She recalls, “Mrs. Turnbow always carried a little brown paper bag. She had a pistol in it. But she didn’t trust those people. I mean people had tried to firebomb her home, so she might have been in the presence of a senator and a congresswoman, but she carried a gun.” Our Official Song for Black History Month
https://www.youtube.com/embed/fPr3yvkHYsE
Please take time today to reflect on the African Americans that literally died fighting for your Rights. Talk to family, friends, and other members about our past and how we want to shape our future within the Firearms community.