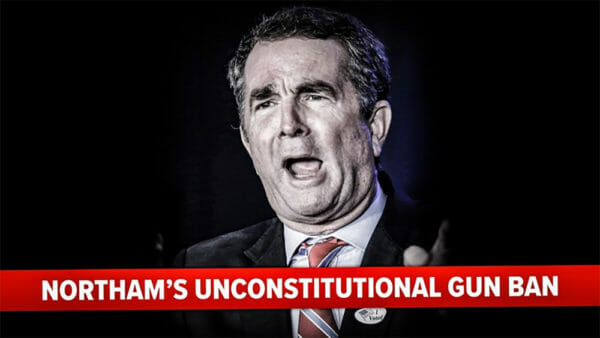 Virginia Gov. Ralph Northam U.S.A. –-(Ammoland.com)- The latest “Assault Weapons” scam from Gov. Northam and Delegate Levine does nothing to change GOA’s firm opposition to HB 961. Gun confiscation is still the goal. The House “substitute” to be considered by the House of Delegates today and tomorrow allows ownership of specific firearms prior to July 1, 2020, but no one can buy, sell, transfer, manufacture — or possibly, even repair — after that date. This treats Virginians unequally, even as the US Constitution requires “equal treatment” under the law. The bill and substitute amendment are incredibly poorly drafted — perhaps by design. So while you can keep your firearm which will be illegal to buy and sell after July 1, 2020, it appears that you could become a Class 6 felon with five-year prison terms if you try to buy any part to repair your firearm! Guns that cannot be repaired are basically worthless. So, back-door (can’t repair) and front-door (can’t buy or sell) would accomplish their confiscation goals. The geniuses who cooked up this horrendous “compromise” see nothing wrong with putting us firearms owners, who have not done anything, in jail for five years, simply for repairing, gifting, loaning or transferring any one of the at least 150+ guns that fall into the Bloomberg-Northam-Levine banned gun categories. What gives them the authority to re-write the Second Amendment? GOA estimates that HB 961 will outlaw all future purchases of at least 157 types of semi-automatic rifles for Virginians. That figure comes from the failed 2013 version of U.S. Senator Diane Feinstein (D-CA) federal Assault Weapons ban. Her list covered at least 95% of all modern, semi-automatic sporting rifles. The Levine bill will outlaw at least that many if not more firearms. Virginia does not presently have a magazine size limit, so the Governor and Levine want 12+ round magazines banned with violations a Class 6 felony mandating five years in prison. After the law goes into effect, every 12+ round magazine and every common gun accessory will be illegal to own with the same 5-year jail penalty. This so called “compromise” offers nothing and is very arbitrary. GOA is opposed to any limits on magazine size. Furthermore, none of the huge number of banned firearms can be manufactured in Virginia, unless made for purchase by the military or the police. How will the 100+ shooting ranges in Virginia be impacted? Will they be able to stay in business if the manufacture of repair parts for guns loaned or rented to patrons becomes “illegal?” Will range owners also serve five years in jail for trying to repair a firearm or “loaning” a banned gun to a patron after July 2, 2020? The answer is the bill and substitute amendment are so poorly drafted we don’t know. Our Blackface, or Klan-clad Governor, is simply decimating our Second Amendment inalienable rights by dictating which guns, which gun accessories, and which repair parts we can and cannot buy to defend ourselves and our family, or hunt, target shoot, compete or even repair a firearm! This bill is outrageous and must be stopped! How our Governor, Delegate Levine and Michael Bloomberg can call this “commonsense gun control” with a straight face is anyone’s guess. They say they want to control “gun violence” but they will likely be creating more violence by their attempts to disarm law-abiding citizens who will have a harder time minimizing the violence created by criminals who will have guns because they disobey all laws, including gun laws. These gun-grabbing leftist Virginia politicians cannot be trusted. We’ve had enough of the flat out lies, false and misleading claims, and rhetoric used by elites in power who protect themselves but who want to disarm us! They would love to repeal the Second Amendment! They don’t believe “citizens” should be able to protect themselves. Please email your delegate (above) to oppose the latest gun confiscation scheme of HB 961. And since time is short, click here to look up your Delegate’s phone number and tell him or her to vote NO on HB 961. Each of us needs to do our part to expose this gun heist and defend the rights of every Virginian! About Gun Owners of America

GOA was founded in 1975 by Sen. H.L. (Bill) Richardson (now retired). The GOA Board of Directors brings over 100 years of combined knowledge and experience on guns, legislation and politics. GOA’s Board is not satisfied with the “status quo.” Americans have lost some of our precious gun rights and we want them back! This is why GOA is considered the “no compromise” gun lobby. From state legislatures and city councils to the United States Congress and the White House, GOA represents the views of gun owners whenever their rights are threatened.