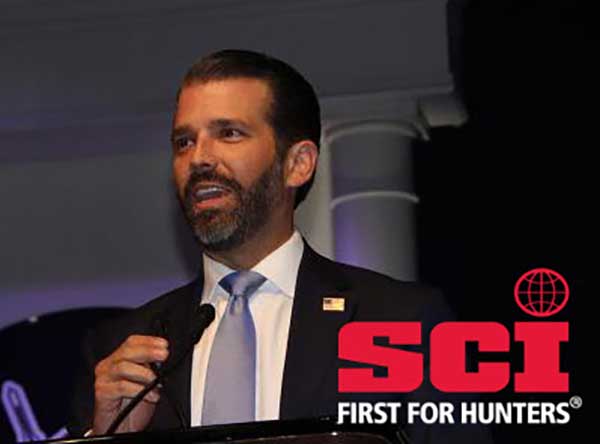 Donald Trump Jr. Helps Safari Club InternationalWashington, DC – -(AmmoLand.com)- Safari Club International ended its annual Convention in Reno, Nevada this year on a star-studded high note. Highlighting the evening, with the help of Donald Trump Jr., was a record $340,000 raised at auction to benefit the SCI Foundation Sables and their efforts to educate the world about the importance of hunting. The evening began with opening remarks from SCI/SCIF CEO Laird Hamberlin, then moved on to the awards of the night. Britanny Longoria presented the Cabela's Young Hunter Awards to Kenia Link and Zackary Corr and then the Federal Legislator of the Year Award was presented to Congressman Jeff Duncan of South Carolina's Third District. Susan Hayes received the Diana Award for her dedication to SCI and its ongoing education and conservation programs. Past President Craig Kauffman received the Hall Of Fame Award in recognition of his years of service to SCI and its ideals.

Aurelia Skipwith, Director of U.S. Fish and Wildlife ServiceA welcome surprise in the form of USFWS Director Aurelia Skipwith followed President Steve Skold's address. Ms. Skipwith's speech followed the unofficial theme of the evening, centering on the need to educate the non-hunter or as one member referred to them, the agnostic hunters. She spoke of her grandfather who had introduced her to the world of hunting and fishing and stated he would be proud that she was speaking to such a large group of like-minded individuals. Keynote speaker Donald Trump Jr. wowed the crowd throughout the evening, generously posing for selfies on the floor before the dinner began and then galvanizing the crowd with his speech. With a mix of humor and seriousness, he spoke of his unlikely beginnings as a “son of a New York billionaire” to the world of the outdoors in general and hunting in particular. He revealed that his maternal grandfather took him to Communist Czechoslovakia in summers to teach him the basics of woodcraft and expose him to the harsh realities of other, less fortunate parts of the world. He credits a teacher at his private school for mentoring him in the skills of hunting and sparking the passion he continues to follow, despite his many vocal critics. The momentum from his speech helped propel the evening's premier auction item, a hunt with Donald Trump Jr. and his son in Alaska for Sitka black-tailed deer, to astronomical levels. Once the bidding started, the price rose dramatically, topping out at $190,000. In a surprise move, Mr. Trump announced that the outfitter was offering another slot on the hunt and bidding began again, topping out at $150,000 and bringing a grand total of $340,000 for the first auction item alone. Bidding for subsequent auction items was spirited, as well, putting a golden finishing touch to the week's activities. The SCI Convention will be moving back to Las Vegas Nevada for 2021 and 2022 to celebrate the 50th Anniversary of Safari Club International and the 50th Anniversary of the SCI Annual Convention respectively.

Safari Club International Safari Club International – First For Hunters is the leader in protecting the freedom to hunt and in promoting wildlife conservation worldwide. SCI's approximately 200 Chapters represent all 50 of the United States as well as 106 other countries. SCI's proactive leadership in a host of cooperative wildlife conservation, outdoor education and humanitarian programs, with the SCI Foundation and other conservation groups, research institutions and government agencies, empowers sportsmen to be contributing community members and participants in sound wildlife management and conservation. Visit the home page www.SafariClub.org, or call (520) 620-1220 for more information.
International Headquarters Washington, District of Columbia · Tucson, Arizona · Ottawa, Canada
www.SafariClub.org