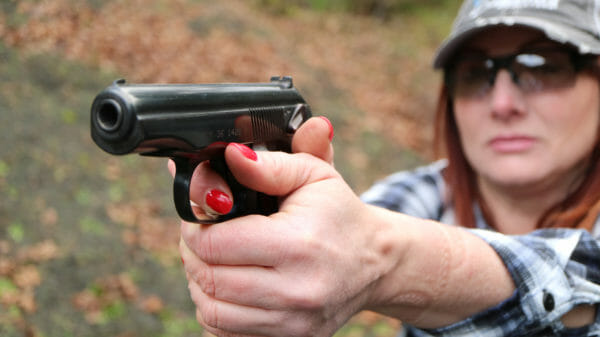 Teya Freeman of GBGuns with Century Arms' Bulgarian Makarov. Photo by Graham BaatesUSA – -(Ammoland.com)-  There's no denying that Cold-War cool that the Makarov pistol exudes.  Century Arms, long known for their importation of military surplus firearms from around the world, continues to bring us neat pieces of history from abroad.  AmmoLand readers known that my own first firearm was a Mosin Nagant imported by Century Arms.  20 years later I still have that rifle and it even inspired my acquisition of the American Mosin Nagant (also from Century Arms) we covered not long ago.  Our Bulgarian Makarov is another example of the interesting finds tucked away in Century Arms' Surplus Corner. The Makarov pistol entered service in the Soviet Union in 1951 and is still in service in many former Soviet countries today.  9mm Makarov (technically 9.2x18mm) falls somewhat between Western .380 ACP (9x17mm) and 9mm Luger (9x19mm).  As a result it offers decent defensive power while still generating pressures low enough for safe operation in a blowback pistol.  By using a fixed barrel and blowback operation the Makarov is simpler to produce, uses fewer parts, and has incredible reliability compared to other designs.  These factors are just some of the reasons why the Makarov not only won the military trials, but also why the pistol is still in use decades later.  For a closer look at our sample see the tabletop video below.
https://www.youtube.com/embed/OCq2xN0pLvs
The surface treatment on our example is beautiful and is nicely complemented by the deep red of the grips.  We hit the range to test in our usual manner including a “What's For Dinner?” test and accuracy.  Teya took over most of the shooting and despite feeling some sensitivity to the violence of blowback actions found the Makarov quite shootable.  You'll see in the slow-motion footage what the recoil impulse looks like at 1/16th speed.  Seven different loads are also run through the gun to check for operation and recoil.
https://www.youtube.com/embed/qnyA6NCMmlg
True to the product description our Makarov proved to be in excellent condition.  True to the Makarov's reputation we didn't experience any issues on our range day that couldn't be attributed to old magazines or shooter error.  Fortunately, Makarov magazines are available and reasonably priced for a piece of Cold War history.  After decades of service use the ammunition is also readily available so correcting shooter error is simply a matter of range time.  Defensive loads are less common, but Hornady loads a Critical Defense round for the Makarov and so I'm others are out there.  Knowing that Makarovs both commercial and military have been imported for years I'm sure some of you know of other defensive loads and can tell us about them in the comments below. While prices today may be a bit higher than they were in the past reasonable samples can be found around $350.  Considering this is an all-metal pistol with a proven design and some historical value it makes for a good buy in my book.  If you're curious what else Century has hidden in their Surplus Corner take a look here but be prepared to present and FFL, either yours or the local shop you use if you'd like to order. About Graham Baates