VIRGINIA: SUPPRESSOR BAN PASSES HOUSEU.S.A. –-(Ammoland.com)- Yesterday afternoon the Virginia House of Delegates voted 51 – 48 in favor of passing House Bill 961, Delegate Mark Levine’s (D-45) “assault firearm” and suppressor ban. All 45 Republican Delegates voted against the bill. They were joined by Del. Lee Carter (D-50), Del. Steve Heretick (D-79), and Del. Rosalyn Tyler (D-75), with Del. Kelly Convirs-Fowler (D-21) abstaining. Now that the bill has passed the House, it will move to the Senate for consideration by the Senate Judiciary Committee. The suppressor provisions of House Bill 961 were amended in Committee on Friday, removing the confiscation provision that was previously included. Should the bill become law, anyone who possesses a federally registered suppressor in Virginia prior to July 1st would be able to legally maintain possession of their property. However, the acts of importing, selling, manufacturing, and purchasing suppressors would be prohibited for civilians after enactment. For this reason, among others, HB 961 remains a bill that the American Suppressor Association strongly opposes. The relevant suppressor language, which was passed by the House, reads: 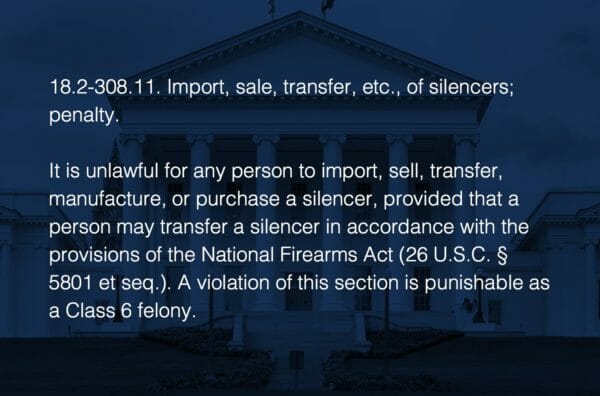 The American Suppressor Association will continue to fight against HB 961, but we need your help. If you are a Virginia resident, please take the time to contact members of the Senate Judiciary committee by using our form below. We ask that you politely urge them to oppose this draconian legislation.