Just the Flu or an International Slow Motion Train Wreck?

Just the Flu or an International Slow Motion Train Wreck? 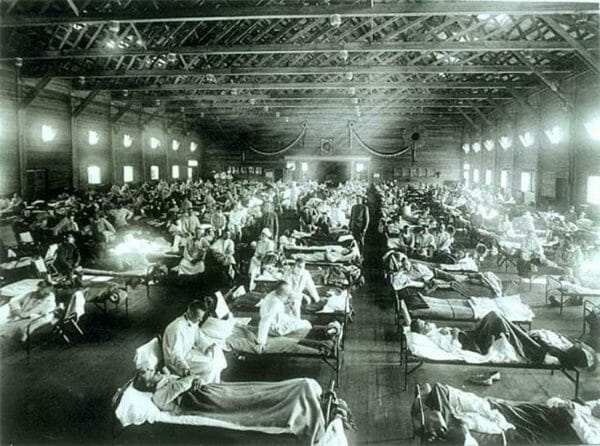 Spanish Flu Pandemic 1818USA – -(AmmoLand.com)- It is only the Flu. These are the famous words of the political leaders of the day, in 1917-1918 while large populations of the world were dying. They called it the Spanish Flu pandemic. Pandemic means an epidemic that spreads over a wide area. It was incorrectly named because World War I was going on and the governments on both sides had censorship of the news. Spain was not at war and their newspapers reported the latest information on the pandemic as it was occurring. Because most of the timely and accurate information was coming from that country people wrongfully thought Spain started the whole thing. It is most likely that the 1917 Great Influenza epidemic started in Kansas and was taken to an army camp by some young men who were joining up to fight, now that the US had entered the war. Military bases and college campuses are some of the worst places to be if there is an easily spread disease around, especially if it is passed on by coughing and sneezing. People go from living in lots of open space of the family home to the very confined space of a crowded dormitory room or a military barrack. The practice of medicine in 1917 was not what it is today. Many doctors of the time attended medical schools that did not require the student to have an undergraduate degree. Some doctors graduated from medical school without ever seeing a live patient. Also, because the US entered the First World War, the military had already done a very good job of screening for the better trained medical personnel and then drafting the most competent physicians in the country. This, unfortunately, left the older, less modern trained doctors, and the ones who attended questionable medical schools, to treat the sickening public. A public that was about to start dying by the tens of thousands in this country and by the millions worldwide leaving ruination everywhere. The death rate had been reported as high as 40 million back during the epidemic and has been revised over the years to approximately 100 million. According to John M. Barry who wrote the book The Great Influenza #add, it killed more people in twenty-four weeks than AIDS killed in twenty-four years. Most people in the US at the time were directly affected by the Flu. If not as a patient themselves, then by a family member, close friend or neighbor who suffered and died. My great-grandparents and all but their oldest daughter (to include my grandfather) contracted the Flu. My great aunt nursed the entire family back to good health then contracted the Flu herself and died I first heard that story in the 1950s when we would go to Missouri and visit my great-grandmother. Thirty-plus years after the pandemic the family was still talking about it as if it had just happened. It is different when you actually lose a family member in an epidemic vs. reading about it in the paper. It would appear the US gave this lethal crisis to the world and as it developed the politicians and the military leaders not only turned a blind eye but withheld important information that would have allowed the public to prepare and react more efficiently. After all, it was only the flu. President Wilson never publicly acknowledged that there ever was a flu. At the end of the war, he traveled to Europe and promptly contracted influenza himself. One of the effects of the flu in some patients is swelling in the brain. Even if you survive it can be a precursor to strokes later in life. President Wilson had a major debilitating stroke shortly after he returned to the US. But it was only the flu. The October 2005 cover story for National Geographic was “The Next Killer Flu-Can we stop it?” The TV and print news are continually running stories about flu issues in Asia. There was the flu vaccine shortage the year before and that was for the regular normal (whatever that means) yearly flu. Between thirty, and fifty thousand Americans, die each year from flu. If you think the response to the hurricane disasters in the US has been slow to meet the public’s needs, that will pale in comparison if there is a pandemic outbreak. Remember people did not fly back in 1917. This time it will spread faster and be more deadly. Not if – but when. The above column was written in 2005 but the facts still remain the same. Here we are fifteen years later and more depressing information about the 1917 pandemic have increased our knowledge of the death and destruction to society that world-wide health crises caused. It was explained to me by those whose job it is to monitor all things China, that China is allegedly a never-ending source for providing pandemics to the rest of the world. It will start slow but it will grow and with our modern transportation systems it will spread exponentially as we have never seen before in history or modern times. When it hits sub-Saharan Africa, and it will with all the Chinese in those nations trying to establish a political beachhead, there will be no stopping it.
https://www.youtube.com/embed/HWtQFXcXxjc

https://www.youtube.com/embed/ltYIIXJTKEc
When it goes worldwide at the local level (your state or your town) it will not be about survivability. It has to be about operability. You cannot just survive as a state or a nation you have to be able to continue to operate as a society. Federal, state and local governments have to be able to continue to function. Of course, there will be fewer capabilities in the area of services provided to the public and leadership will have to make the hard decisions as to what they can and cannot provide to the taxpaying residents. Health care and safety in our communities will be the priority. The safety of those public servants there to help will become an issue. If firefighters are being attacked by desperate people when they try to respond to an emergency in a private home, future response times will increase. Dead or injured cops and firefighters impact the entire community. If you want to get a visual education on how this could play out, watch the 2011 movie Contagion (https://en.wikipedia.org/wiki/Contagion_(2011_film). Hollywood worked really hard to make Contagion as accurate as possible. There is no comic relief in this move–just sadness. The desperate and the dangerous will come out to prey on the weak, the unprepared and the stupid. Stupid will be a word you will hear a lot, as the unprepared, the untrained and those who failed to understand that not all of life's needs and answers come from inside a smartphone begin to suffer.
https://www.youtube.com/embed/-R0dMYbAbug
Non-perishable food and a survival firearm could become the two most important items to have on hand. Safe drinking water and the lack of it could be the primary motivator for demonstrated bad behavior on the part of even our most stalwart citizens and can lead them to cross over to the dark side if they or their loved ones are suffering. The problem is in our modern society of electricity and labor-saving devices it does not take much to generate perceived unbearable suffering for reasons my 1917 great grandparents did not know existed. “If I cannot watch TV or spend hours online I will just die”, obviously my great grandmother did not know what either of those items were and did not miss them during the 1917-1919 influenza crisis. “What do you mean I cannot just dial 911 and have all my police, fire and emergency medical needs taken care of in minutes–I am a taxpayer, why not?” We have a lot more Americans living in densely packed big cities than in 1917. There are more automobiles to be driven out into the world and infect everyone a driver could meet on a small motor outing. Park your car and head to public transportation and you can infect even more. It is time to stock up on medications. Over the counter, meds should be greatly enhanced in your home. If you are a heart patient, a diabetic or have some other serious long term medical problem, you must have extra supplies of your prescription medications on hand. Start making arrangements now. If you are not proactive about your own safety, your health and your family's security you may become a statistic. I am too old to have to live through a modern version of 1917-1919. I hope my observations and predictions are in fact incorrect and they carve on my headstone “he was wrong.” No, President Wilson, it is not just the flu, this has the potential of being that slow-motion train wreck that will influence the world for years to come. Stay healthy my friend and keep your powder dry.