Washington state anti-gunners have a March 30 fundraiser on the calendar, while gun rights activists like these folks will rally at the state capitol in Olympia April 18. (Dave Workman)U.S.A. –-(Ammoland.com)- The Seattle-based gun prohibition lobbying group, Alliance for Gun Responsibility has announced its 2020 fund raising luncheon will be held on March 30, in an email blast that brags, “the Alliance has been leading the charge to prevent gun violence in Washington state.” While these fund-raising efforts have netted hundreds of thousands of dollars from wealthy Seattle-area elitists over the past seven years, it would be fair to question whether this gun control crusade has done anything beyond making it more difficult for law-abiding citizens to exercise their rights under the state and federal constitutions. A mere look at crime date suggests that none of their efforts—including passage of gun control Initiatives 594 in 2014 and I-1639 in 2018—have prevented a single violent crime. This fact was not lost on the Citizens Committee for the Right to Keep and Bear Arms, which last month had a scathing reaction to gun control efforts in Washington, where the group's national headquarters is located. Ammoland News reported the situation here. The Washington experience could be educational for Arizona, where a dozen anti-gun Democrat lawmakers have submitted legislation targeting so-called “assault weapons” and original capacity magazines. Senate Bill 1625 includes a lengthy definition of “assault weapon” and “large capacity magazine” that should be read carefully. For the record, Washington and Arizona share—word-for-word—the same state constitutional right-to-bear-arms provision. Washington adopted its language in November 1889 when it achieved statehood. Arizona adopted the language in February 1912 when it became a state. “The right of the individual citizen to bear arms in defense of himself or the State shall not be impaired, but nothing in this section shall be construed as authorizing individuals or corporations to organize, maintain, or employ an armed body of men.” 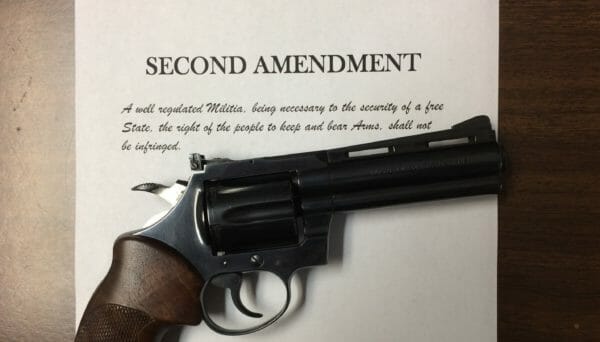 Second AmendmentWhat has happened in Washington with increased gun restrictions is telling. According to the FBI Uniform Crime Reports, in 2015, the first year following passage of I-594, the so-called “universal background check” measure, there were 209 homicides of which 141 involved firearms. In 2016, there were 195 slayings including 127 committed with guns, including the two “mass shooting” incidents in Mukilteo (July) and Burlington (October) that claimed a total of 11 lives. In 2017, Washington saw 228 killings, including 134 with firearms and in 2018, the number crept up again with 232 total homicides including 138 in which a gun was used. This year, the Democrat-controlled legislature is considering legislation to make it more difficult to obtain or renew a concealed pistol license. Anti-gunners are alarmed that more than 647,000 active Washington CPLs are in circulation, the second-highest number of any western state. There is also legislation that would erode, if not essentially nullify, Washington's 35-year-old model state preemption law. Because of this full assault on gun rights, this year has seen the emergence of energized grassroots activism in Washington, primarily the result of an unsuccessful effort to repeal Initiative 1639, the measure that stripped young adults of their Second Amendment right to purchase and possess a so-called “semiautomatic assault rifle.” The initiative set a minimum age of 21 years to buy such a firearm—the definition of which encompasses every self-loading rifle ever manufactured—and required proof of training. Law enforcement groups were heavily opposed to the initiative, but the billionaire-backed Seattle gun control lobbying group pushed it through with a multi-million-dollar campaign that outspent the opposition ten-to-one. The Second Amendment Foundation and National Rifle Association are challenging provisions of I-1639 in U.S. District Court in Tacoma. While I-1639 defined a “semiautomatic assault rifle” as “any rifle which utilizes a portion of the energy of a firing cartridge to extract the fired cartridge case and chamber the next round, and which requires a separate pull of the trigger to fire each cartridge,” the proposed Arizona law is different. The Arizona proposal defines an “assault weapon” as: (a) A semiautomatic rifle that has the capacity to accept a detachable magazine (b) A semiautomatic pistol or any semiautomatic centerfire rifle with a fixed magazine that has the capacity to accept more than ten rounds of ammunition (c) A semiautomatic pistol that has the capacity to accept a detachable magazine and that has at least one of the following characteristics: (i) Any feature capable of functioning as a protruding grip that can be held by the nontrigger hand (ii)A folding, telescoping or thumbhole stock (iii) A shroud that is attached to the barrel, or that partially or completely encircles the barrel, and that allows the bearer to hold the firearm with the nontrigger hand without being burned, excluding a slide that encloses the barrel (iv) The capacity to accept a detachable magazine at any location outside of the pistol grip (d) A semiautomatic shotgun that has one or more of the following: (i)A pistol grip or thumbhole stock (ii) Any feature capable of functioning as a protruding grip that can be held by the nontrigger hand (iii) A folding or telescoping stock (iv) A fixed magazine capacity that carries more than five rounds (v) An ability to accept a detachable magazine (e) A shotgun with a revolving cylinder (f) Includes a conversion kit, part or combination of parts, from which an assault weapon can be assembled if those parts are in the possession or under the control of the same person (g) Does not include any firearm that has been made permanently inoperable. Washington activists have not indicated whether they will mount a fund-raising effort of their own, but they are learning fast the importance of money to build a lobbying effort. They are up against billionaires and wealthy elites headquartered primarily in the immediate Seattle/Lake Washington region. The overwhelming bulk of campaign funding to pass I-1639 two years ago came from a dozen people or entities, including Michael Bloomberg’s Everytown for Gun Safety Action Fund. March for Our Rights, one of Washington’s grassroots groups, is planning a rally at the Capitol in Olympia on Saturday, April 18. (It’s the same weekend as the National Rifle Association’s annual meetings and exhibits in Nashville.) Last year, some 2,500 people attended, but this year the rally will be held after the Legislature is scheduled to adjourn. That’s not to downplay the rally’s importance. With the Alliance fund-raiser slated at the end of March, Washington gun owners will be alerted to any new gun control initiatives that might be tried this year. If such proposals as the CPL training requirement or repeal of state preemption don’t survive the legislative process, they might be part of an initiative gun owners will have to fight furiously this fall. About Dave Workman