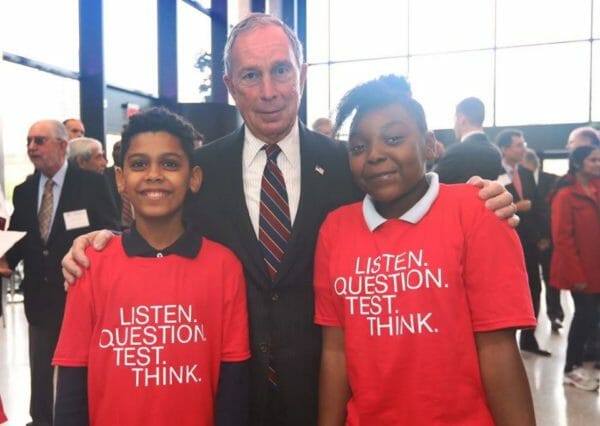 The man who would be king can’t wait for these kids to get old enough to impose special, race-based adult disarmament restrictions against. (Mike Bloomberg/Facebook)U.S.A. – -(Ammoland.com)- “Democratic presidential candidate Mike Bloomberg was swiftly condemned Tuesday after a years-old audio clip surfaced in which he appears to discuss in starkly racial terms the ‘stop-and-frisk’ policing practice he presided over as mayor of New York City,” Politico reported Tuesday. [and by the way, AmmoLand News reported on in 2015]: “The scratchy recording was disseminated overnight across social media, provoking a new wave of online criticism against the billionaire businessman’s self-funded White House campaign just as it has begun to earn broader support in public polling.” News outlets, which are quick to smear Trump supporters and Republicans in general as racist, were scrambling to act as megaphones for Bloomberg’s excuse-making. CNN made sure to help him distance himself from racism charges, citing his apology and emphasizing how such policies “do not reflect the way he thinks.” But even supposedly “conservative” Fox News left out Bloomberg’s most damning statement when it reported: “A newly surfaced recording from a 2015 speech by Michael Bloomberg, in which the former three-term mayor of New York City gives a full-throated defense of the controversial policing procedure known as ‘stop and frisk,’ is threatening to undermine the 2020 presidential candidate's subsequent apologies for backing the policy and hurt his status with minority voters.” The reason the recording is “newly surfaced,” is because Bloomberg put the squeeze on the Aspen Institute, which hosted his speech, to spike it, and they, like good little agenda-firsters, rolled over for him without question. And the reason he wanted it killed, a handful of us reported at the time, is that we noticed a piece of information buried deep in an Aspen Times account of the event: “Bloomberg claimed that 95 percent of murders fall into a specific category: male, minority and between the ages of 15 and 25. Cities need to get guns out of this group’s hands and keep them alive, he said.” That group contains legal adults. It also contains citizens, voters, veterans. To treat them all like violent criminals and blanket strip them of a fundamental right without a charge or even the pretense of due process would be the act of a mad tyrant. It’s bad enough that a man who swore an oath to uphold the Constitution thinks so little of the Fourth Amendment. Worse is that even “conservatives” defending Bloomberg’s position on “stop and frisk” are avoiding the real problem: Ignoring the Constitution and instead imposing generational “progressive” policies has resulted in a statistically significant subset of the very types of “citizens,” across all demographics, that John Adams cautioned about in his 1798 missive to the Massachusetts Militia: “Our Constitution was made only for a moral and religious People. It is wholly inadequate to the government of any other.” The solution is not to ignore the Constitution even more. That’s the road to universal misery and death. Adams continued, revealing  a founding intent at odds against everything loathsome toads like Bloomberg stand for: “An Address so unanimous and firm from the officers commanding two thousand Eight hundred Men, consisting of such substantial Citizens as are able and willing at their own Expence, compleatly to arm, And cloath themselves in handsome Uniforms does honor to that Division of the Militia which has done so much honor to their Country. Oaths, in this Country, are as yet universally considered as Sacred Obligations.” That’s what this blasphemous little wannabe dictator and his fellow power-mad freaks, in their relentless quest to control everyone in Everytown, would deny us all: Not just our right, but our duty and the duty of the states to uphold the core purpose of the Second Amendment. That’s what prospective totalitarian Bloomberg would deny to all minority males under 25, regardless of their worth as individuals. Lumping them all in with that part of the population incapable of self-control is bigotry, and that at its core is collectivist. It's no surprise that citizen disarmament zealots parrot the same narrative as domestic enemy communists, and accuse Second Amendment advocates of being the ones who are racist — all in the name of “common sense.” Keeping and bearing their own arms capable of being used to preserve freedom against those who would take it by force was once an expectation for free men. Remember that the next time some useful idiot or the evil creature doing the using bemoans our having “weapons of war.” And remember that the moral people Adams envisioned as being necessary to Constitutional government were the same people his contemporaries deemed “necessary to the security of a free State.” We can conduct ourselves just fine, as the incredibly peaceful — and inclusive — outcome of the Virginia rally (or any annual NRA meeting, for that matter) demonstrates for all to see.  We won’t be scapegoated by those who can’t or won’t. And we will not disarm.
About David Codrea: