A Little to the Left… and Other Gun Safety Horror Stories

A Little to the Left… and Other Gun Safety Horror Stories 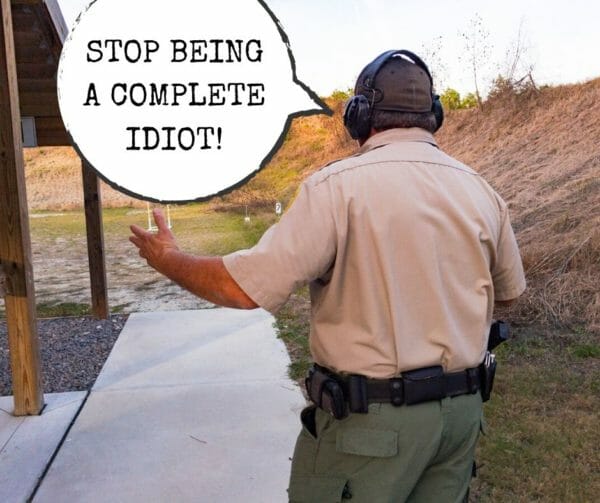 A Little to the Left… and Other Gun Safety Horror StoriesUSA – -(AmmoLand.com)- The very human propensity to harm ourselves is only surpassed by our ability to judge each other. Sure, we joke about earning Darwin Awards, but the term “Hold my beer and watch this…” didn’t just emerge from the primordial soup. Nor did it begin with the advent of YouTube “I’ll be famous now, alive or dead!” videos. We earned it. Sadly, there are still far too many gun safety dumpster fires at our range outings. Why? I think people – mostly men – have a hubris gene. We’re biologically pre-wired to believe that we instinctively know how to operate firearms. How hard can it be? Point gun in the desired direction and squeeze. Anyone who seeks training or asks more experienced shooters must be a fairy pansy, or maybe worse. If you ask for help, you’re just admitting your failure at being a man. If you think about it, proof of the hubris gene is easy to find. When you see a shooter saying or doing something dumb, and call them out on it, you’ll almost always get a response like, “I’ve been shooting guns since I was a kid.” I’ve also been listening to the radio since I was a kid, but you don’t want me singing at the Grammy’s. When you hear that explanation, it’s awfully tempting to ask why they’ve been repeating the same dumb comment or action that long, but I digress. While gun safety statistics are better than ever, we’re not quite there yet. Here are two encounters that prove my point. My favorite outdoor range, now a DNR-monitored first-class facility, used to be a free-for-all affair. While it was owned and maintained as part of a national forest, there was no staff present, so it was self-monitored by shooters. That made for some interesting scenarios from time to time. I refused to go on weekends when bad safety behavior was the rule. At least during weekdays, the shooters were generally knowledgeable and safety conscious. One day while zeroing a rifle, three twenty-somethings – two men and a woman – arrived with a scoped rifle. No worries, that’s what the range is for. No one present gave them a second look. During the next cold range for target changes, the two “Hold my beer…” guys took their target 50 yards or so downrange. The woman set up behind the rifle, assumed a firing hold, and peered through the scope. That’s bad enough, but within a moment, she began calling out target placement instructions to our young Darwin stallions. “A little left… No, a bit more to the right…” and so on. She was making sure the young bucks were square in the crosshairs to make sure the “target” was in the right place. 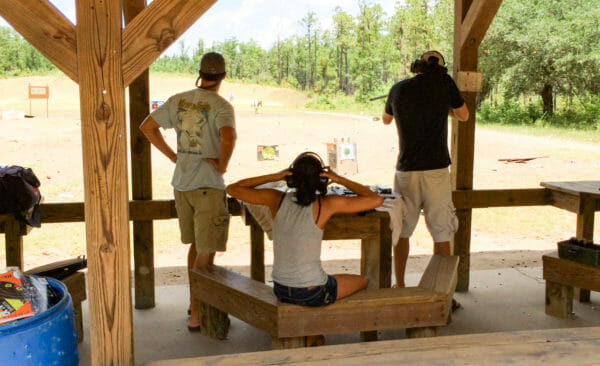 If you see these people at your range, pack up and leave! Where do you even start with a situation like this? Inadvertent muzzlings are bad enough, but a deliberate muzzling with a scoped rifle? Yes, they probably vote too. I apologize on behalf of all humanity. On another occasion, at the same range, I was packing up for the day when a scruffy-looking guy wandered in from the parking lot. He had some extra mileage on his 60 or so year-old frame and I wondered if he might be drunk. He wandered up to the firing line, dangling an uncased revolver from his right hand and carrying a box of cartridges in his left. OK, then… He proceeded to set up a couple of benches away from a young family. The mom, dad, and two ten to twelve-ish aged boys had set up a veritable shooting gallery for the boys’ amusement. Tin cans, balloons, clay targets, and more were laid out in front of the family’s shooting lane so the boys could plink away with their single-shot .22 rifle. It sure looked like a fun family outing to me. As you might guess, the kids put some time and effort into setting up the target gallery; they were clearly excited to start shooting. When the range went hot, our scraggly revolver man proceeded to shoot across two lanes at the kids’ targets. Mom and dad were stunned and turned to stare at our sixgun hero. He finally clued in and asked them what their problem was. The father responded, rather politely I thought, “Hey, those are my kids’ targets. They spent a lot of time setting them up. Would you mind shooting at your own targets in your lane?” Apparently Bitchy McCrankyPants was in no mood to take requests from anyone. He shouted back something along the lines of, “I’ll do what I want!” A bit of back and forth ensued until Mr. Raggedy Ass thought he settled the matter. “I’m a Security Officer so I can shoot whatever I want!” As you might surmise, that didn’t go over well, and the dad asked, in an equally loud and sarcastic voice, at which mall he worked. So, let’s recap the situation. We have a drunk or crazy self-proclaimed ill-tempered mall cop, with a loaded revolver, arguing with a family of four. We have a young dad, also armed, standing right next to his wife and two young boys, arguing with, and insulting a brave retail hero, at least in his own mind. What could possibly go wrong? By this time, I had accelerated my packing so I could get the hell out of the soon-to-be OK Corral. Contemplating the situation as I drove away, I couldn’t figure out who was the bigger idiot. Clearly, the Medal of Honor Recipient for mall security was a complete ass. He had no concept of gun safety from the moment he walked the 50 yards from the parking lot to the firing lane waving a revolver around to the point where he engaged in obnoxious behavior escalating to an armed, but verbal confrontation. Oh, and if he was drunk, that’s a whole new level of gun irresponsibility. But the dad was also a complete idiot. Why on God’s green earth would he engage in an argument with a disturbed, possibly drunk or at least shakey, and armed individual? Especially when surrounded by his family? I have no problem with him asking the guy to please stop shooting at his kids’ carefully arranged targets. But the instant things turned sour was the time to shoo his family to the car and get the heck out of there. When you’re armed, it’s your responsibility to suck up your pride to avoid escalating a senseless conflict. If you have to use a firearm to save your life, that’s one thing. If you have to use your firearm because you insisted on engaging in a pointless argument, that’s just stupid. So, what can we do to overcome the sometimes stunning lack of common sense and knowledge all too frequently encountered on our shooting ranges? It’s our obligation to call out unsafe behavior when we encounter it. There’s never harm in doing that diplomatically and respectfully, but firmly. After all, unsafe gun handling puts everyone at risk, not just the offender. In most cases, those of us nearby are in more danger than the one with the firearm. If that doesn’t work, and in most cases it does, take a lesson from Mr. Let’s-Argue-With-An-Armed-Man-In-Front-of-the-Kids. Pack up and leave. There will be plenty of other opportunities to shoot later – safely.
About Tom McHale is the author of the Practical Guides book series that guides new and experienced shooters alike in a fun, approachable, and practical way. His books are available in print and eBook format on Amazon. You can also find him on Facebook, Twitter, Instagram and Pinterest.