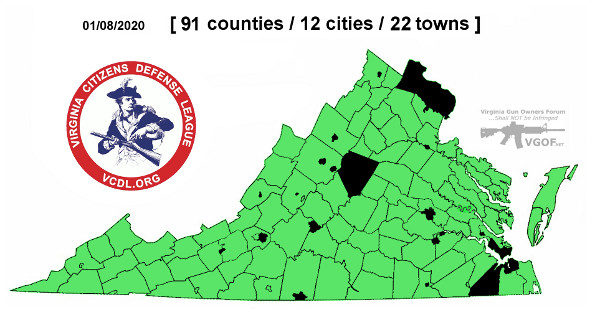 Breaking News Virginia Senate Committee Kills Gun Ban for 2020, Kicks Bill to 2021U.S.A. –-(Ammoland.com)- A controversial gun ban bill, HB 961, has been defeated in the Virginia Senate Judicial Committee. The defeat comes in the form of a decision to postpone the bill to 2021. The committee also voted to send a letter to the crime commission, asking them to study the bill.  The parliamentary maneuvers amount to killing the bill. From wric.com: RICHMOND, Va. (WRIC) — The Senate Judiciary Committee continued HB961, also known as the assault weapons ban, to the 2021 session. The bill will be much harder to pass in 2021. Virginia has its state legislative elections in odd-numbered years. In 2021, all  100 of the House of Delegates offices will be up for re-election. The House of Delegates is currently controlled by the Democrat Party, with 55 members. The Republicans are represented in the House with 45 members. The NRA attributes the victory for the Second Amendment supporter to the intense opposition to the bill voiced by tens of thousands of activists. Over 22,000 activists showed up in January, at the Capitol, on Lobby day, to show intense and widespread opposition to infringements on the right to keep and bear arms. From the nraila.org: Thanks to Second Amendment supporters around the Commonwealth ceaselessly voicing their opposition to a sweeping gun ban, the Senate Judiciary Committee voted 10-5 to reject House Bill 961 on February 17th. Bloomberg’s House majority in the General Assembly is not going to deliver their most coveted agenda item to their billionaire master. 91 of 95 counties in Virginia have declared themselves to be Second Amendment sanctuaries. The bill was highly controversial, banning many of the most popular rifles in the United States, as well as significant numbers of shotguns, pistols, and accessories. If passed it would have certainly been challenged in the courts. Both the Virginia State Constitution, and the United States Constitution contain strong protections for keeping and bearing arms.  From the Virginia Constitution: Section 13. Militia; standing armies; military subordinate to civil power That a well regulated militia, composed of the body of the people, trained to arms, is the proper, natural, and safe defense of a free state, therefore, the right of the people to keep and bear arms shall not be infringed; that standing armies, in time of peace, should be avoided as dangerous to liberty; and that in all cases the military should be under strict subordination to, and governed by, the civil power. The amendment was altered in 1970 to include the phrase “the right of the people to keep and bear arms shall not be infringed”, which echoes the wording in the Second Amendment.  As the Second Amendment has been upheld as an individual right, It is difficult to believe the Virginia amendment would not be. A new Governor and a new legislature will be elected in 2021. Both elections will test the resolve of Second Amendment supporters to oppose more infringements on the rights to keep and bear arms. Election of a pro-Constitution Governor would prevent most infringements from passing in Virginia. There are several other bills in the legislative hopper. The legislature in Virginia meets for a limited time. It becomes ever more difficult to pass legislation as the end of the session nears.
About Dean Weingarten: