Seattle Times Likes Klobuchar in Primary; She’s Got a Gun Control Plan, Too

Seattle Times Likes Klobuchar in Primary; She’s Got a Gun Control Plan, Too 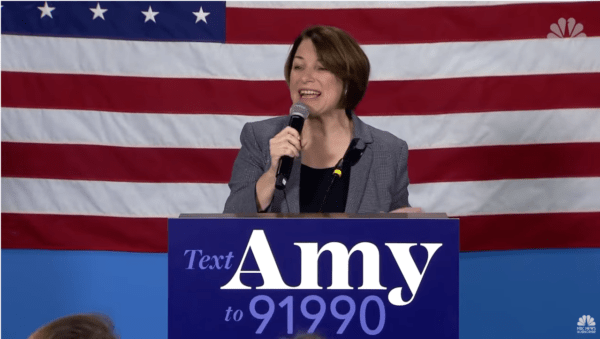 Sen. Amy Klobuchar gets an editorial nod in Seattle, but gun owners shake their heads. (Screen snip, YouTube, NBC)U.S.A. –-(Ammoland.com)- The traditionally anti-gun-rights Seattle Times has endorsed Minnesota Democrat Sen. Amy Klobuchar in advance of Washington State’s March 10 primary, and like every other candidate in the race, she’s got a gun control scheme that appears based on a misunderstanding of what the Second Amendment is all about. As reported by ABC News on Feb. 7, “For Sen. Amy Klobuchar, D-Minn., judging gun control legislation is about what would ‘hurt [her] Uncle Dick in the deer stand,’ a perspective that comes from her state's value of the outdoors, including hunting and fishing…” But Second Amendment activists, in the Pacific Northwest, Minnesota and anywhere else on the map have been insisting for many years the Right to Keep and Bear Arms is not for protection against rogue whitetail bucks, but against tyranny. It’s about defending one’s home and heartland, not about hunting. Her chances of winning the nomination appear somewhere between zero and not-at-all with Democrat Socialist Sen. Bernie Sanders running well ahead of the pack following his smashing win in Nevada. Heading into South Carolina, where flailing former Vice President Joe “I’m-the-only-one-on-this-stage-who” Biden is holding out hopes for a surprise with support from the minority community, Klobuchar must provide something fresh, but her position on guns is like week-old salad to the Second Amendment grassroots. Ammoland looked at Klobuchar and here’s what we found: (* The “boyfriend loophole” was explained by Bustle.com: “It refers to the fact that the Lautenberg Amendment only keeps guns out of the hands of convicted domestic abusers who are currently — or were at one time — married to their victim, live with their victim, have a child with their victim, or are a parent or guardian of their victim. That means stalkers and current or former boyfriends or dating partners can still buy and own a gun, even if they've been convicted of a domestic violence crime.”) There does not appear to be anything in the former Hennepin County prosecutor’s agenda about prosecuting criminals, pushing for hard time for armed crime, or locking them up permanently under a “three strikes” rule, even in material supplied to USA Today. Klobuchar, like every other Democrat looking to replace President Donald Trump, developed a serious case of lockjaw after last year’s campaign-ending blurt by rival Robert Francis “Beto” O’Rourke during a debate in Houston that, “Hell, yes, we’re going to take your AR-15, your AK-47.” That revealing case of community muteness was harshly criticized at the time by Alan Gottlieb, chairman of the Citizens Committee for the Right to Keep and Bear Arms. “Thanks to O’Rourke, Democrats have just graduated from being the ‘party of gun control’ to officially being the ‘party of gun confiscation,’ and nobody in the firearms community is going to forget that.”–Alan Gottlieb, CCRKBA “From this moment forward,” Gottlieb predicted, “when Democrats talk about ‘gun reform’ or ‘gun safety,’ the whole country will know they’re not just talking about gun control, they’re talking about taking firearms from law-abiding citizens who have committed no crime.” O’Rourke’s campaign quickly tanked, but Klobuchar has weathered on. However, if the Minnesota senator expects the support from a legion of “Uncle Dick” gun owners, in South Carolina or Washington State, she’s in trouble. In the Evergreen State, a growing grassroots gun rights movement spearheaded by the fledgling Gun Rights Coalition (GRC) and Washington 2020 Legislative Action Group, is busy battling gun control efforts in the Democrat-controlled Legislature. Immediately after defeating a proposed magazine ban last week, a handful of anti-gun lawmakers introduced a new bill—House Bill 2947—last week in an effort to push the ban through, anyway. The proposed ban is supported by the billionaire-backed Alliance for Gun Responsibility, the Seattle-based group that has bankrolled three gun control initiatives since 2014. The GRC is mobilizing its troops to descend on the Capitol Tuesday for a hearing on HB2947 to “Oppose the Red Shirts,” a reference to Moms Demand Action members who have been showing up in Olympia and at weekend legislative town halls around the state to make their presence visibly known. Meanwhile, south of the Columbia River in neighboring Oregon, the Oregon Firearms Federation is warning its members and followers about House Bill 4005. This bill “Requires owner or possessor of firearm to secure firearm with trigger or cable lock, in locked container or in gun room except in specified circumstances. Punishes violation by maximum of $500 fine,” according to a legislative summary. Under this bill, “If (a) minor obtains (an) unsecured firearm as (the) result of (a) violation,” the proposed law would punish a violator with a maximum $2,000 fine. The person who didn’t secure the firearm would face strict liability for any injuries to people or damages to property. There are some exceptions. Oregon’s presidential primary is May 19, far enough over the horizon for it to be essentially meaningless. RELATED: INTERCEPTED: Everytown’s Big Bucks Beg to Flip Texas About Dave Workman